On 25 March 2008, an Air Atlanta Icelandic Boeing 747-300 was decelerating after landing at Dhaka when a fuel leak in the vicinity of the No 3 engine led to a fire which could not be extinguished. An emergency evacuation was accomplished with only a few minor injuries. The cause of the fuel leak was traced to mis-assembly of a fuel feed line coupling during a C Check some six months previously. The failure to follow clear AMM instructions for this task in two specific respects was of concern to the Investigating Agency.

On 25 March 2008 a Boeing 747-300 being operated by Air Atlanta Icelandic under a wet lease to Saudi Arabian Airlines on a passenger flight from Medina, Saudia Arabia to Dhaka was on the daylight landing roll on runway 14 at destination in normal ground visibility when a fire broke out in the vicinity of the No 3 engine and pylon. The aircraft was stopped at the beginning of the taxiway at the end of the runway and, when the fire could not be extinguished by crew action, an emergency evacuation was initiated and all 325 occupants exited with an estimated 17 minor injuries incurred. Although the Rescue and Fire Fighting Services did eventually extinguish the fire, the airframe damage was such that the aircraft was declared to be beyond economic repair.

An Investigation was carried out by the Icelandic AAIB. Fire damage was found to be confined to the No. 3 engine and pylon and the right wing but this damage was sufficient to preclude economic repair.

It was found that approximately 50 seconds after touchdown whilst the aircraft was still decelerating, the TWR had advised that fire could be seen in the area of the right wing. The RFFS had already been alerted and, as ATC advised seeing a fire, a flight deck fire warning for the No. 3 engine had been annunciated and the first fire bottle discharged. The warning continued and as the First Officer discharged the second fire bottle, the aircraft commander informed the senior cabin crew member of the situation and instructed him to “evaluate the situation and to evacuate the passengers if necessary”. Having investigated and observed smoke and the fire through the windows, he had used a megaphone to order an evacuation of all passengers and cabin crew.

It was established that the total flying hours of the aircraft were 99,327:35 and the total cycles were 18,779. There were no relevant recorded ADDs at the time of the occurrence although there had been two unexpected malfunctions of the No 3 engine in flight towards the end of 2007 which had not persisted and for which no positive rectification had been undertaken.

Testing established the source of the fuel leak as a specific coupling. It was found in August 2007, the aircraft had undergone a ‘C’ Check carried out by the Engineering & Maintenance Division of Malaysian Airline System (MAS) at Kuala Lumpur during which one of the many routine tasks was to replace all the O-ring seals in the fuel feed line couplings in the engine struts.

The Investigation found scratch marks on many of the coupling nuts and concluded that they were probably a consequence of the use of pliers to tighten or loosen the nuts despite the fact that the AMM clearly specified that such nuts should be tightened by hand. It was also found that the locking wire connected to the coupling nut that was leaking had been applied in such a way that the coupling nut was able to move. When the coupling was dis-assembled, it was found that one of the two retaining rings was missing and the O-ring was in the wrong position and had probably not been providing the seal that it would have done when correctly installed between a pair of retaining rings.

The explanation for the elapsed time since fitting until the fire had occurred was that leakage was only possible when certain wing flexing movements of the type which occur both in flight and when moving on ground were simulated. It was also concluded that “the fuel leak test that was performed during the ‘C’ Check before the accident may not have revealed visual evidence of fuel leak through the coupling even though it was incorrectly assembled” and that “later the coupling nut might have rotated slightly due to the fact that the nut was secured with a lock wire in such a way that it was (eventually) possible for the nut to rotate enough for the fuel to leak”.

Some aspects of the mis-assembly of this coupling were also found on engine No 1 but the assembly on engine No 2 was found to be correct. It was not possible to establish the identity of the technicians who had carried out particular tasks during the ‘C’ Check from MAS records. 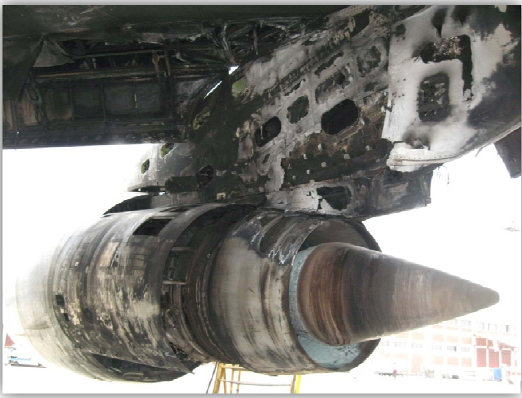 Fire damage to the No. 3 engine and pylon (reproduced from the official report)

The Investigation also reviewed the conduct of the evacuation and considered that, whilst the outcome had been successful, the manner in which it was ordered and conducted had indicated opportunities for improvement.

The Conclusion of the Investigation was that the fire had resulted from a fuel leak from a fuel line coupling in the No. 3 engine pylon and that this coupling had been incorrectly assembled, probably during the ‘C’ Check completed on the aircraft at MAS Kuala Lumpur in August 2007.

The Investigation formally recorded its Findings in respect of cause as follows:

Findings in respect of the evacuation were recorded as:

Findings in respect of poor maintenance practices at MAS were recorded as:

One Safety Recommendation was made as a result of the Investigation:

Safety Action taken during the Investigation was noted to have included: