On 15 October 2015 a Boeing 747-300 experienced significant vibration from one of the engines almost immediately after take-off from Tehran Mehrabad. After the climb out was continued without reducing the affected engine thrust an uncontained failure followed 3 minutes later. The ejected debris caused the almost simultaneous failure of the No 4 engine, loss of multiple hydraulic systems and all the fuel from one wing tank. The Investigation attributed the vibration to the Operator's continued use of the engine without relevant Airworthiness Directive action and the subsequent failure to continued operation of the engine after its onset.

On 15 October 2015, an uncontained No 3 engine failure occurred soon after take-off to a Boeing 747-300 (EP-MNE) being operated by Mahan Air on a domestic passenger flight from Tehran Mehrabad to Bandar Abbas as flight 1095 in day VMC. The adjacent outboard engine also failed after being damaged by ejected debris and the aircraft made a successful return to its departure airport but then had to be towed off the runway because hydraulic systems losses had disabled the nose wheel steering. Substantial damage was caused to both the airframe and both right hand engines. Although aircraft control difficulties after the failure caused considerable discomfort to passengers and cabin crew, there were no injuries and post-flight passenger disembarkation was completed normally.

An Investigation was carried out by the Aircraft Accident Investigation Board (AAIB) of the Iran Civil Aviation Organisation (CAO). Data from the SSFDR were successfully downloaded and used to assist the Investigation but relevant data on the CVR was found to have been overwritten. It was noted that the failed engine was a GE CF6-50C2. The prevailing weather conditions were benign and had no effect on either the engine failure or its aftermath.

It was established that just after take-off from runway 29L, the No 3 engine vibration reading increased to 2.3 units whilst those of the other three engines remained at 0.4. The Captain had previously experienced similar engine vibrations and because of this did not take action to reduce engine 3 thrust - or shut it down altogether. Instead he continued the climb with equal thrust on all 4 engines and allowed the vibration to continue. Three minutes later, as the aircraft was climbing through 7,500 feet QNH (the reference altitude of Tehran Mehrabad is 3,962 feet), an uncontained failure of the No 3 engine occurred. Parts of the rear section of the engine detached and struck the adjacent outboard engine which also failed and debris also struck the aircraft structure. Impact damage resulted in the loss of the No 1 hydraulic system as well as those dependent on failed engines 3 and 4. ATC approved a request for the aircraft to stop its climb at 8,000 feet and enter a hold to attempt to restart engine no 4, but this restart was not successful. During this hold, there were considerable deviations in altitude due to loss of three of the four hydraulic systems which meant that pitch and roll and yaw control authority were all significantly compromised - the engine 4 restart attempt was actually commenced at a recorded 8,860 feet. The resulting loss of aircraft stability also led to serious discomfort for the passengers.

After the unsuccessful attempt to restart engine No 4, a return to the departure airport on two engines was made without further event with a landing completed after 37 minutes airborne. Braking after touchdown was only available using the alternate system and nose wheel steering was not available so the aircraft had to be towed in from its stopping position on the runway. It was noted that contrary to the Operator's procedures, no emergency was declared to ATC.

It was noted that the fact that flap 10 was still set by the time the engine failure occurred meant that essential stability in roll was achievable and it was explicitly concluded that this fact had "prevented a fatal accident". An attempt was made to engage AP1 but this was unsuccessful because of the loss of No 3 hydraulic system and although AP2 powered by the only remaining hydraulic system was available, it was not engaged.

Inspection after arrival at the assigned parking position found that the No. 3 engine Low Pressure Turbine was completely detached (see illustration below). Debris from it had hit No. 4 engine resulting in damage to its cowling and fan blades. Other ejected debris had hit the aircraft fuselage and the lower right hand wing surface. Wing surface impact caused significant damage to several hydraulic lines and to the inboard fuel tank from which most of the fuel was lost. Some parts of the main landing gear bay doors were also damaged by debris and ejected engine debris weighing approximately 10 kg which had fallen to the ground was found at three locations - some pieces had hit and injured livestock. 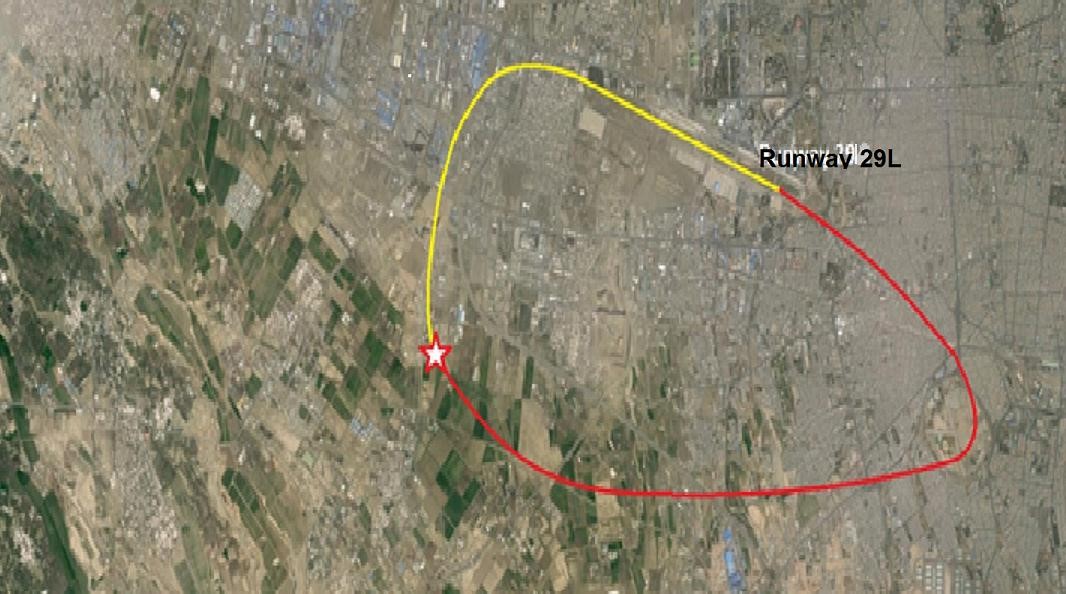 The reconstructed ground track showing the position of the engine failure. [Reproduced from the Official Report]

It was found that according to GE, there had previously been at least 8 similar failures of the same engine worldwide and that having identified the root cause as high HP Turbine Rotor imbalance causing secondary vibratory damage to the associated LP turbine S3 disk, corrective action had been documented and made available in particular via FAA AD 2012-2-07. In each previous case, the LP turbine Stage 3 disk crack propagation which had occurred as a result of this vibration was in the disk forward spacer arm and this was found when examining the failed No 3 engine. This work established that continued engine operation could lead to a 360° crack which would cause separation of the complete LP Turbine from the rest of the engine as had happened in this case.

A review of the maintenance history of engine No 3 and its LP turbine Stage 3 disk was carried out and it was found that the engine had been installed on the accident aircraft 6 days earlier and that in the 8 flights made by the aircraft between installation and the accident flight, repeated flight crew reports of vibration had been received. Each time, various interventions including but not limited to re-torqueing the spinner and balancing the fan had resulted in a brief and temporary reduction in vibration.

A review of all maintenance activity by the Operator relating to the failed engine was carried out and it was found that: 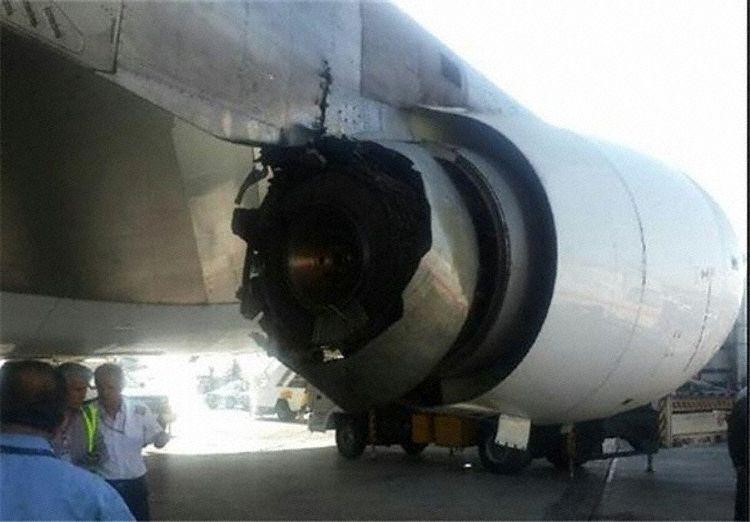 The damaged No 3 engine. [Reproduced from the Official Report]

The Investigation determined that the Probable Cause of the Accident was "the Operator’s failure to modify the Number 3 engine in accordance with the requirements of an applicable AD and an ineffective crew response to excessive N1 vibration which then caused the uncontained engine failure”.

Seven Safety Recommendations were made, one on 28 October 2015 whilst the Investigation was still ongoing and six more at its conclusion.

The Interim Recommendation was:

The remaining Recommendations were as follows:

The AAIB noted but did not accept the following response by the NTSB about the Recommendation made to them:

“Concerning the NTSB recommendation, the requested action is beyond the scope of the NTSB’s mission and we therefore believe it is not appropriate to propose this recommendation in the report. The U.S. government already makes an exception to the primary embargo specifically for safety of flight reasons and maintains a formal process for authorizing the participation of U.S. agencies and companies in these investigations consistent with our interest in maintaining global safety of flight.”

The Final Report of the Investigation was issued on 10 October 2016.