On 22 September 2017, a Boeing 747-400F taxiing in after landing requested and received further taxi instructions from GND on reaching its clearance limit when the controller assumed it had already crossed the active runway ahead. An Airbus A330-300 crew beginning takeoff saw the 747 beginning to cross, rejected the takeoff and stopped well clear of the other aircraft. The Investigation found that the GND controller had failed to check which side of the runway the 747 was on before issuing his clearance and noted that the controllable red stop bar system was not active or required to be.

On 22 September 2017, a Boeing 747-400F (OM-ACB) being operated by Air Cargo Global on an international cargo flight from Turkmenbashi, Turkmenistan, to Hong Kong as CCC831 with an augmented crew began to cross runway 07R after landing on runway 07L in normal daylight visibility at the same time as an Airbus A330-300 being operated by Hong Kong Airlines on a scheduled domestic passenger flight from Hong Kong to Shanghai Pudong as CRK236 was beginning its takeoff on runway 07R. The A330 crew saw the 747 ahead, initiated a low speed rejected takeoff and came to a stop approximately 1,100 metres from it.

An Investigation into the Serious Incident in accordance with Annex 13 principles was carried out by the Hong Kong Air Accident Investigation Authority (AAIA). Digital flight data recorder (DFDR) data retrieved from the Airbus A330 and recorded data from various air traffic control (ATC) systems were available and two of the three pilots present on the 747 flight deck and the controller involved were interviewed.

It was established that after clearing runway 07L after landing, the 747 crew contacted GND where the OJT Instructor had momentarily taken over the position from the trainee because of his observed inability to perform despite being three months into his in-position training. The Instructor cleared the aircraft to taxi to the ‘J6’ holding point at the parallel departure runway 07R (see the illustration below). This runway would have to be crossed in order to reach the allocated parking stand and in accordance with applicable ATC procedures, this crossing would require transfer to the TWR frequency and clearance from the TWR to cross the runway before being transferred back to GND to complete the taxi in. Soon after issuing this clearance, the Instructor handed the GND position back to the trainee but by the time the 747 was approaching the limit of its clearance five minutes later and reported this to GND, the Instructor had again taken over the position from the trainee.

On receiving the call from the 747, the GND Instructor immediately responded by issuing the rest of the taxi instructions having failed to check which side of runway 07R the 747 was on either visually or referring to the A-SMGCS display provided. Meanwhile, TWR had cleared the departing A330 to take off from 07R having not yet received any contact from GND transferring the 747 ready for the crossing. The 747 crew, as visitors to the airport, took their taxi clearance as inferring that the necessary runway crossing was approved and continued across the unlit stop bar at ‘J6’ and entered the runway on track to the opposite side. As they approached the runway, they reported having seen what appeared to be a stationary aircraft at the beginning of runway 07R with its landing lights on. 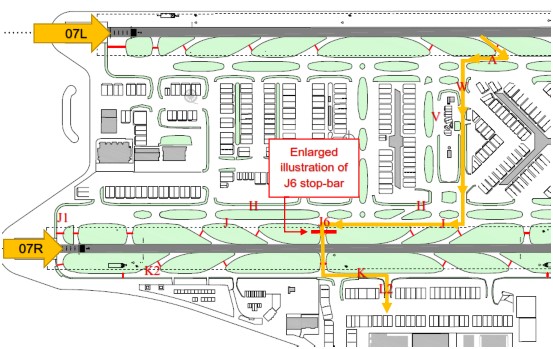 The taxi route of the 747 showing the ‘J6’ holding point. [Reproduced from the Official Report]

Once the 747 had entered the runway and the speed of the approaching A330 had exceeded 50 knots ground speed, a visual and aural warning was automatically triggered on the A-SMGCS at both the GND and TWR controller positions. However, these warnings went unnoticed because the volume for the aural alert had been turned down at both controllers’ positions to the extent that it was inaudible. The conflict was resolved safely because the A330 crew observed the incursion ahead and initiated a rejected takeoff during which the maximum ground speed reached was recorded as 69 knots. The A330 was finally brought to a stop abeam RET ‘K2’ after rolling for approximately 630 metres and about 1100 metres from the 747 ahead.

It was noted that in accordance with ATC procedures, the illuminated stop bar system provided at all runway access points including ‘J6’ was inactive because it was daylight, the visibility was not less than 6 km and/or the cloud ceiling was not less than 1,000 feet and the runway lighting system was not in use for any reason. The Investigation noted that this policy was “in line with ICAO Doc 4444 requirements”.

The OJTI and their unqualified trainee had been in position for about an hour in traffic conditions assessed by the ATC Supervisor to have been “moderate”. It was found that prior to taking over control of the GND frequency just before the incursion occurred, the OJTI had already done so on several previous occasions after observing several unforced errors in transmissions by the trainee and/or in order “to avoid build up of traffic”.

Safety Action taken by Hong Kong Civil Aviation Department during the course of the Investigation and advised to it was noted to have included the following:

The Final Report of the Investigation was completed early in August 2021 and released online shortly afterwards.