On 22 December 2018, a Boeing 747-400 crew began to climb from FL310 without clearance and prescribed separation was lost against both an opposite direction Boeing 777-300 at FL 320 and another same direction Boeing 777-300 cleared to fly at FL330. The Investigation found that the 747 crew had requested FL 390 and then misunderstood the controller’s response of “level available 350” as a clearance to climb and gave a non-standard response and began to climb when the controller responded instructing the flight to standby for higher. Controller attempts to resolve the resultant ‘current conflict warnings’ were only partially successful.

On 22 December 2018, a Boeing 747-400 BCF (919CA) being operated by National Air Cargo on an international cargo flight from Bagram to Hong Kong as NCR840 deviated from its clearance to fly level at FL310 at night in unrecorded flying conditions and separation was lost against an opposite direction Boeing 777-300 being operated by EVA Air on a scheduled international passenger flight from Bangkok to Vienna as EVA061 and a same direction Boeing 777-300 being operated by KLM on a scheduled international passenger flight from Amsterdam to Bangkok as KLM875. The minimum separation occurred between the manoeuvring 747 and KLM 777 which reached the same altitude when only 1.84 nm apart.

A Serious Incident Investigation was carried out by the Indian Aircraft Accident Investigation Bureau (AAIB) in accordance with the Aircraft (Investigation of Accidents and Incidents) Rules 2017. Only ATC recorded radar and communications data were available and details of the experience of the pilots involved was only obtained for the National Air Cargo 747 flight crew. This flight’s augmented crew consisted of a Captain and two First Officers. The Captain had a total of 16,056 hours flying experience of which 2,746 hours were on type. He had previously been P1 rated on the Boeing 777 and several narrow body and business aircraft types. The two First Officers had total flying experience of 3,681 hours and 3,176 hours with a respective 102 hours and 617 hours of these totals being on type.

It was established that the Boeing 747 was maintaining FL 310 southeast bound on ATS route M890, an RNP10 route which runs from the Afghanistan border to the north and then west of Delhi. A Boeing 777-300 was tracking in the same direction at FL 330 almost above the 747. Another 777-300 was on the same route travelling in the opposite direction at FL 320 and to the southeast of the other two aircraft. All traffic involved in the investigated loss of separation was working the Delhi ACC East sector on frequency 124.55 MHz.

Editor’s Note: the AIP INDIA states that ATC will apply 50 nm longitudinal separation minima between suitably equipped aircraft at the same level on ATS route M890 within the Delhi FIR.

The 747 crew requested a climb to FL 390 and when the controller responded with “Level available 350”, the crew replied “Roger 350” to which the controller, aware that the KLM 777 travelling in the same direction was just above the 747, responded with “standby for higher”. According to the 747 crew, the Captain had just taken a break and his left side seat had been taken by the relief First Officer as PM. Following the R/T exchange, the PF First Officer initiated a climb after wrongly assuming that a clearance to do so had been given and had reached FL 331 when, a little later, the Captain returned to the flight deck. After taking the right side observer seat, he reported having “observed a converging aircraft”. This led him to instruct the operating crew to “descend and turn left” but when he considered that their response to this instruction was too slow, he had reached out from his seat and disconnected the AP and A/T, reduced thrust and initiated the left turn. It was reported that during this manoeuvre, the aircraft had encountered wake turbulence from the other aircraft and the Captain had decided that they should level off at FL 325 to keep clear of other traffic. 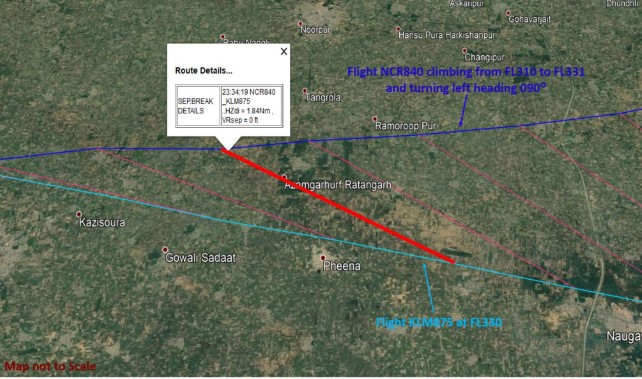 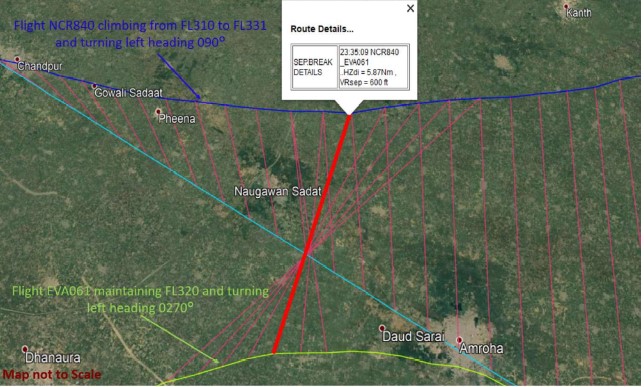 The separation between the 747 and the EVA Air 777 at FL320. [Reproduced from the Official Report]

At about this time, an ATS automated ‘Predicted Conflict Warning’ (PCW) was activated between the northwest bound (opposite direction) EVA Air Boeing 777 at FL320 and the 747 and the controller responded by instructing the 747 to turn left onto 090°. This PCW was then quickly followed by another between the 747 and the KLM 777 at FL 330 just as the controller was instructing the EVA Air 777 to turn left onto 270°, an instruction which did not elicit any response. The PCW between the 747 and KLM 777 then momentarily ceased before recurring, this time continuing for 2 minutes and 14 seconds. Soon after this had restarted, the EVA Air 777 crew acknowledged the earlier instruction and commenced the left turn. The controller then again instructed the 747 to take up a 090° heading and this time added an instruction to descend to FL 320 which were both acknowledged. About half a minute later, another PCW was activated between the EVA Air 777 and the 747. Both continuing PCWs (747/KLM 777 and 747/EVA Ait 777) then ceased as 10nm lateral radar separation was re-established.

In summary, the Investigation found that during the event, the standard lateral and vertical separation of 10 nm and 1000 feet respectively had been reduced to 5.87 nm and 600 feet between the 747 and the EVA Air 777 and to 1.84 nm and zero feet respectively between the 747 and the KLM 777. However, it was noted that none of these aircraft reported having received a TCAS RA to ATC. It was also noted that no instructions had been given to the KLM 777 which had continued as cleared at FL 330.

It was observed that the controllers use of plain language rather than standard phraseology when responding to the 747s request to climb to FL 390 had facilitated the incorrect response of the 747 crew and that the nature of their readback when advised of the ‘availability’ of FL 350 clearly indicated that it may have been understood as a clearance, an incorrect assumption which had then been reinforced by the controllers “standby for higher” since this was capable of being understood as standby for the originally requested FL390 having received an initial clearance to FL 350. It was also considered that whilst the Captains intervention from his observer seat “may have increased separation” there had been no explanation of why this exceptional action had been necessary and some concern about the risk therefrom.

The Probable Cause of the event was determined as “the (controller’s) incorrect use of plain language while passing information to aircraft, which led to ‘confirmation bias’ and incorrect understanding of his advisory communication by the 747 crew”.

A Contributory Factor was also identified as “the lack of situational awareness amongst the 747 crew”.

The Final Report was completed on 18 January 2020 and subsequently released online.