On 29 April 2013, a Boeing 747-400 freighter departed controlled flight and impacted terrain shortly after taking off from Bagram and was destroyed by the impact and post crash fire and all occupants were killed. The Investigation found that a sudden and significant load shift had occurred soon after take off which damaged hydraulic systems Nos. 1 and 2 and the horizontal stabilizer drive mechanism components as well as moving the centre of gravity aft and out of the allowable flight envelope. The Load shift was attributed to the ineffective securing techniques employed.

On 29 April 2013, a Boeing 747-400 BCF (N949CA) being operated by National Airlines as NCR102 under callsign ISAF 95NQ on a cargo flight from Bagram Air Base, Afghanistan to Dubai World Central was observed to suddenly pitch up to an abnormal attitude almost immediately after a daylight take off from Bagram in VMC. It then began to descend and recovery was not achieved. All 7 crew members were killed and the aircraft destroyed in the subsequent impact with terrain and the post crash fire which followed.

Note that the source of the video is not NTSB

An Investigation was commenced by the Afghanistan Ministry of Transportation and Civil Aviation (MoTCA) with significant assistance from the NTSB. On 1 October 2013 responsibility for the conduct of the Investigation was taken over by the NTSB. The CVR and FDR were recovered and their data were successfully downloaded. However both recordings ended as the aircraft climbed through 33 feet agl a few seconds after lift off with no sign of anything abnormal.

It was established that the accident flight had departed from 3600 metre-long runway 03, rotating near intersection C and had climbed normally for a few seconds before a steep climb followed by a steep nose first descent ending in terrain impact 180 metres to the north east of the upwind runway threshold. A fierce post crash fire began immediately. Total airborne time was estimated at 35 seconds. The take off weight had been calculated as 337 tons with the C of G towards the rear of the allowable flight envelope. The MTOW was 435 tons.

The accident flight was one of a series being operated under a multimodal contract with the US Transportation Command. Most of the cargo carried on the accident flight had consisted of five Mine-Resistant Ambush-Protected (MRAP) military vehicles - two 12-ton MRAP all-terrain vehicles (M-ATVs) and three 18-ton Cougars. One of the M-ATVs was positioned forward of the three Cougars and the other to the rear of them. The five MRAPS, which made up almost two thirds of the weight of the total cargo carried constituted 'Special Cargo', because they were not contained in a ULD compatible with the aircraft cargo loading system or enclosed in a cargo compartment certified for bulk loading. This meant that special handling and securing/restraining procedures were required.

Debris from the aircraft remote from the impact site was found on the runway near to taxiway C, including small pieces of fuselage skin, a section of hydraulic return tubing, a piece of the rack on which the CVR and FDR are mounted and part of an antenna from one of the M-ATVs. Other pieces of debris were found near the runway between this point and the crash site. 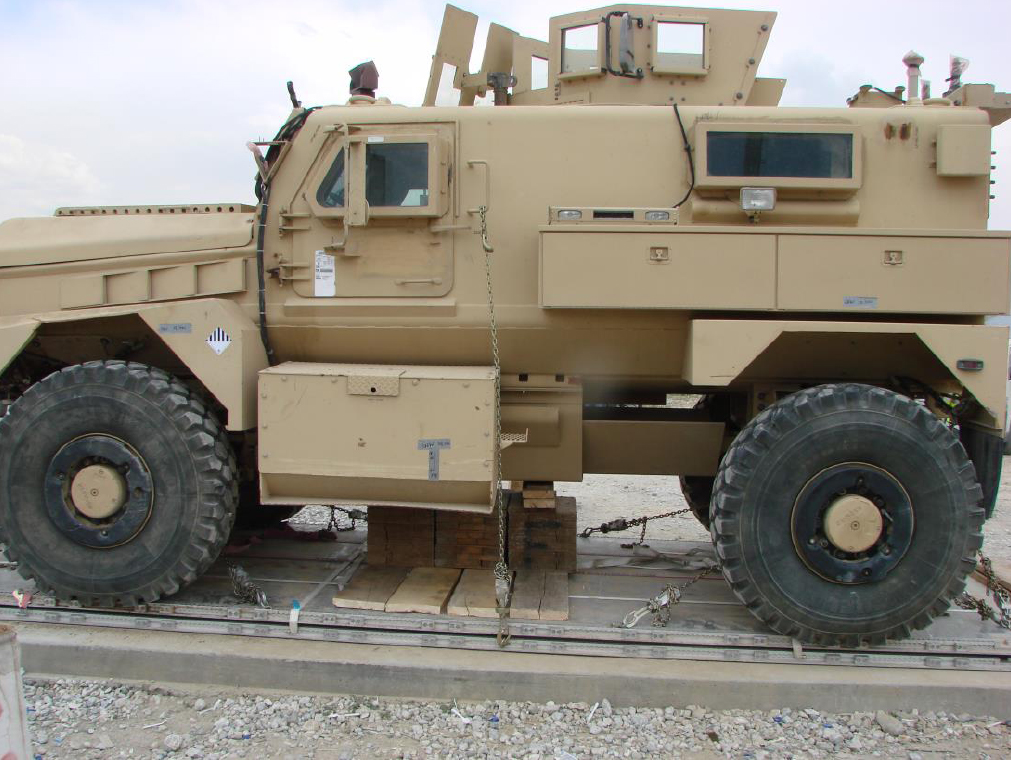 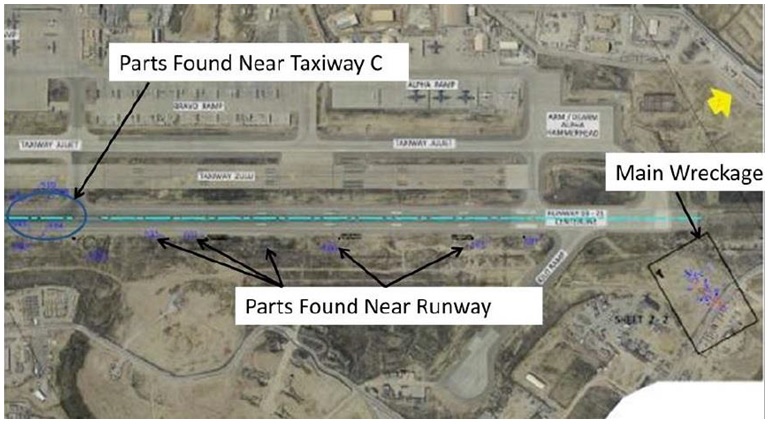 The upwind end of Runway 03 annotated with the position of impact and initially-shed debris and impact. The yellow arrow depicts north, the aircraft departed from left to right. (Reproduced from the Official Report)

The augmented flight crew (two Captains and two First Officers) had flown the accident aircraft from Chateauroux, France to Camp Bastion where all the cargo, including the five M-RAPs, had been loaded before the aircraft continued to Bagram for refuelling (but no change in the load) prior to departure to Dubai. The aircraft was fitted with crew rest facilities used by the operating crew when the augmenting crew members were providing cruise relief. Two mechanics and a loadmaster were also on board. The 34 year old Captain was found to have had about 6000 hours total flying experience including 440 hours since gaining a command on the Boeing 747-400 10 months previously. He had first flown a transport aircraft - the DC8 - on gaining his multi engine CPL in 2004 after two years as a light aircraft flight instructor and had been promoted to Captain on the DC8 two years later. The 33 year-old First Officer had about 1100 hours total flying experience which included 660 hours on the Boeing 747-400.

The 36 year-old Loadmaster was not part of the operating crew or carrying out duties which required any FAA licensing or certification. He had been employed by National Airlines as a loadmaster for a little over two years after previously working as a ground handling supervisor/trainer for a delivery business for 6 years. The periodic company recurrent training evaluation to which he was subject was found to include tie-down restraint criteria/calculations, shoring (load-spreading) criteria/computations and cargo conveyance/restraint systems operation. Neither he nor the operating flight crew members had any previous experience with MRAP vehicle cargo prior to encountering that carried on the accident flight.

It was noted that neither the responsibilities of nor guidance for flight crew - in particular aircraft commanders - in respect of cargo loading, were, respectively explicitly defined/ provided. There was no specific FCOM Checklist requirement to verify the cargo load and security of the load on the main deck of the Boeing 747-400 before flight and no evidence was found of any specific training or guidance for pilots on how to check the cargo load pre flight, although it was reported that this "was discussed as a technique during operating experience". No knowledge of the Cargo Operations Manual used by loadmasters appeared to be required and the general understanding of pilots appeared to be summed up by the view expressed that pilots “relied on the loadmasters 100% to make sure the load was done and secured properly" with very little routine interaction between pilots and loadmasters.

The Investigation noted that the accident aircraft had been converted to freighter configuration in accordance with Boeing SB 747-00-2004 and was equipped with a Telair main deck cargo handling system in accordance with STC ST00459LA5.

The five MRAPs of interest to the Investigation were all loaded on the main deck on pallets. It was reported that no main deck floor locks were used on any of the vehicle/pallet units and that each vehicle was secured to the floor with 5,000-lb-rated tie-down straps, 24 for each M-ATV and 26 for each Cougar in accordance with instructions given by the loadmaster. This was the first time that the operator had ever transported any Cougars. Following arrival at Bagram for refuelling, the aircraft was parked for about 1½ hours. The CVR recording provided the only evidence that there had been some issues involving the security of the MRAPs during the flight from Bagram when crew members could be heard discussing that some cargo had moved, some tie-down straps were loose and one was broken. In respect of the latter, a "knot" was discussed and the First Officer said that all the straps which were keeping the MRAPs from moving backwards were loose. The Captain responded with "I hope…rather than just replacing that strap, I hope he’s beefing the straps up more" and the First Officer then said "he’s cinching them all down". About 15 minutes after this, the loadmaster is present and the Captain is heard to ask "how far did it move?" to which the loadmaster responds "just a couple inches". The Captain then remarks "that’s scary....without a lock (for those big heavy things/anything) man, I don’t like that". Later, he said that objects that size were so heavy that "you'd think.....they probably wouldn’t hardly move no matter what" but the loadmaster replies "they always move….everything moves if it’s not strapped.”

After a careful review of all the evidence, the Investigation concluded that "at least one of the MRAP vehicles (the rear M-ATV) had moved aft into the tail section of the airplane, damaging hydraulic systems and horizontal stabilizer components such that it was impossible for the flight crew to regain pitch control of the airplane". It also concluded that "the likely reason for the aft movement of the cargo was that it was not properly restrained".

An examination of National Airlines’ Cargo Operations Manual found that it "not only omitted required, safety-critical restraint information from the airplane manufacturer (Boeing) and the manufacturer of the main deck cargo handling system (Telair,) but also contained incorrect and unsafe methods for restraining cargo that cannot be contained in ULDs". It was found that the procedures which were provided "did not correctly specify which components in the cargo system (such as available seat tracks) were available for use as tie-down attach points, did not define individual tie-down allowable loads, and did not describe the effect of measured strap angle on the capability of the attach fittings".

In addition to these deficient procedures for restraining special cargo loads, the Investigation identified four other areas of safety concern:

The formally documented Conclusions of the Investigation included the following:

The Probable Cause of the accident was determined as "National Airlines’ inadequate procedures for restraining special cargo loads, which resulted in the loadmaster’s improper restraint of the cargo, which moved aft and damaged hydraulic systems Nos. 1 and 2 and horizontal stabilizer drive mechanism components, rendering the airplane uncontrollable".

A Contributory Factor' was identified as "the Federal Aviation Administration’s inadequate oversight of National Airlines’ handling of special cargo loads".

The Final Report of the Investigation was adopted by the NTSB on 14 July 2015 and subsequently published.