On 23 September 1999, a Boeing 747-400 being operated by Qantas on a scheduled passenger service from Sydney Australia to Bangkok overran Runway 21L during an attempted night landing in normal visibility and came to a halt substantially intact 320 metres beyond the runway end. There was no fire and a precautionary evacuation of the aircraft was not begun until 20 minutes after it came to rest. Only minor injuries were sustained by 38 of the 410 occupants, some during the initial runway excursion, others as a consequence of the evacuation. The aircraft remained substantially intact during the overrun although the nose landing gear and one main landing gear separated. The picture below, taken from the Official Accident Report, shows the aircraft in its final stopping position.

On 23 September 1999, a Boeing 747-400 being operated by Qantas on a scheduled passenger service from Sydney Australia to Bangkok overran Runway 21L during an attempted night landing in normal visibility and came to a halt substantially intact 320 metres beyond the runway end. There was no fire and a precautionary evacuation of the aircraft was not begun until 20 minutes after it came to rest. Only minor injuries were sustained by 38 of the 410 occupants, some during the initial runway excursion, others as a consequence of the evacuation. The aircraft remained substantially intact during the overrun although the nose landing gear and one main landing gear separated. The picture below, taken from the Official Accident Report, shows the aircraft in its final stopping position. 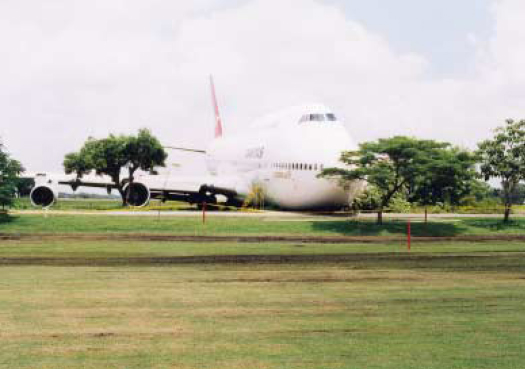 The aircraft in its final stopping position.

The Aircraft Accident Investigation Committee of Thailand would normally have investigated the event but on 18 November, this Committee delegated the investigation to the Australian Transport Safety Bureau (ATSB).

The ATSB Investigation established that the approach had been flown with the First Officer as PF and with flaps 25 selected and that the flight crew had intended to select idle reverse thrust after touchdown. It was noted that an on-duty Second Officer had been occupying the principal supernumerary seat in the flight deck and that the aircraft commander was a management pilot with relatively little experience on the aircraft type compared to both the other pilots.

The crew elected to use flaps 25 and idle reverse as the configuration for the approach and landing, in accordance with normal company practice. At various stages during the approach to runway 21L, the crew were informed by ATC that there was a thunderstorm and heavy rain at the airport, and that visibility was 4 km or greater. The crew was not made aware of the fact that another Company aircraft had gone around from the same final approach at about 250 feet agl a few minutes earlier but were told shortly before landing that the runway was wet and that the last landing aircraft (which had preceded the Company go around) had reported that braking action was ‘good’. The flight crew noted no effect from the weather until visibility reduced when the aircraft entered very heavy rain as it descended through 200 ft on late final approach. The aircraft had then started to deviate above the ILS GS, passing over the runway threshold at 169 knots and a height of 76 feet. Those parameters were within company limits. (The applicable target speed for the final approach was 154 knots and the ideal threshold crossing height was 44 feet.). When the aircraft had been approximately 10 feet above the runway, the Captain instructed the First Officer to go around, but when the main gear touched the runway as the First Officer was advancing the engine thrust levers, the Captain immediately cancelled the go-around by retarding the thrust levers without announcing his actions. Those events were concluded to have resulted in confusion amongst the other pilots and contributed to the crew not selecting (or noticing the absence of) reverse thrust during the landing roll. In addition, the actual touchdown point was found to have been 1002 metres along the 3,150 metre runway, 636 m beyond the ideal point.

Due to a variety of factors associated with the cancellation of the go-around, the aircraft’s speed did not begin to decrease below the actual touchdown speed until the aircraft was over halfway down the runway. The investigation established that, during the landing roll, the aircraft tyres had aquaplaned on the water-affected runway such that the effectiveness of the wheel brakes was limited to about one third of that on an equivalent dry runway. In such conditions and without reverse thrust, there was no prospect of the crew stopping the aircraft in the runway distance remaining after touchdown. The aircraft overran the 100 metre stopway (at the end of the runway) at a speed of 88 knots, before stopping 220 metres later with the nose resting on an airport perimeter road. The depth of water on the runway when the aircraft landed could not be determined but it was sufficient to allow dynamic aquaplaning to occur (i.e. at least 3 mm). The water buildup was the result of heavy rain on the runway in the preceding minutes, and possibly because the runway was both un-grooved and without a porous friction course.

The Investigation concluded that although there were no definite measurements available, there had been sufficient rainfall just prior to the landing to have caused the runway surface water depth to have exceeded 3 mm. It was considered likely that the distribution of water on the runway had changed during the six minute period between the previous landing aircraft and the accident aircraft with actual braking action likely to have been close to ‘poor’.

During the examination of the performance of the aircraft on the runway, it became evident that the Flaps 25 / Idle Reverse Thrust landing procedure used (and which was the ‘preferred’ company procedure) had not been appropriate for operations on to water-affected runways. The more appropriate approach/landing procedure would have been Flaps 30 / Full Reverse Thrust, which would have involved a lower approach speed, probably been easier to fly in terms of speed control and the runway aim point and provided maximum aerodynamic drag after touchdown when the effectiveness of the wheel brakes could be reduced because of aquaplaning. The Investigation concluded that had this configuration been used, the overrun would most probably have been avoided. The Investigation also considered that, as with other Company B747-400 pilots, the accident flight crew had “not been provided with appropriate procedures and training to properly evaluate the potential effect the Bangkok Airport weather conditions might have had on the stopping performance of the aircraft. In particular, they were not sufficiently aware of the potential for aquaplaning and of the importance of reverse thrust as a stopping force on water-affected runways.”

Conclusions of the Investigation

The overall structure of the Investigation followed the Reason Model of accident causation and so the Conclusions were presented in those terms and are quoted below verbatim.

A number of active failures that had a significant influence on the development of the accident were identified:

Other significant active failures found were:

Five Safety Recommendations were made where important safety matters had not been (or were not being) addressed at the conclusion of the Investigation. These were:

That CASA ensures that all Australian operators of high capacity jet aircraft have in place procedures and training to ensure flight crews are adequately equipped for operations on wet/contaminated runways.

That CASA review the intent of CAO 48 to ensure that operators consider all duties associated with a pilot’s employment (including managerial and administrative duties) when designing flight and duty time schedules, and that this requirement is not restricted to situations where there are one or two pilots.

That the FAA and JAA review the design requirements for high capacity aircraft to ensure the integrity of the cabin interphone and passenger address systems, particularly with respect to cabin/flight deck communications, in the event of runway overruns and other relatively common types of events which result in landing gear and lower fuselage damage.

That CASA consider widening its existing skill-base within the Compliance Branch to ensure that CASA audit teams have expertise in all relevant areas, including human factors and management processes.