On 28 July 2011, 50 minutes after take off from Incheon, the crew of an Asiana Boeing 747-400F declared an emergency advising a main deck fire and an intention to divert to Jeju. The effects of the rapidly escalating fire eventually made it impossible to retain control and the aircraft crashed into the sea. The Investigation concluded that the origin of the fire was two adjacent pallets towards the rear of the main deck which contained Dangerous Goods shipments including Lithium ion batteries and flammable substances and that the aircraft had broken apart in mid-air following the loss of control.

On 28 July 2011, a Boeing 747-400F (HL7604) being operated by Asiana on a scheduled cargo flight from Incheon to Shanghai Pudong as AAR 991 declared an emergency due to a main deck fire whilst in the cruise at FL340 in day VMC approximately 50 minutes after take off. An emergency descent and diversion to Jeju were initiated but after indications from crew radio calls that it was becoming difficult to retain control of the aircraft, there was no further contact and wreckage from the aircraft was subsequently found in the sea.

The accident occurred in international waters and the Investigation was carried out by the ARAIB (Aircraft and Railway Accident Investigation Board) of the State of the Operator, South Korea.

No ULB transmissions were detected in the area where significant amounts of floating and submerged wreckage was found and recovered and, despite extensive searches, neither the FDR nor the CVR were found. Recordings of ACARS messaging, ATC radar and R/T communications with the aircraft were available. Some of the cargo was also recovered. According to ACARS transmissions, the ELT was activated but its signal was not received and it was found that was of a type which was inoperative in water.

It was found that within about a minute of evidence that a fire warning had been annunciated, the First Officer had declared the emergency to ATC, requested decent to 10,000 feet and advised an intention to divert to Jeju. These actions were immediately approved without restriction and the descent was made rapidly. The reduction of altitude prevented re-establishing direct VHF radio communications with Incheon ACC and relay via another aircraft was used. With the aircraft at 10,000 feet, the Captain had advised ATC of the loss of rudder control and three minutes later, at 12,800 feet, the loss of "all flight controls". Half a minute later, the First Officer, in the final radio call, advised "the loss of altitude control and the impending ditching". Soon afterwards, it was concluded that a rapid increase in thermal energy produced by the fire had "caused some portions of the fuselage to separate from the airplane in midair" with an in-flight break up then following. A reconstruction of the vertical flight path based on radar and ACARS data sources is shown below: 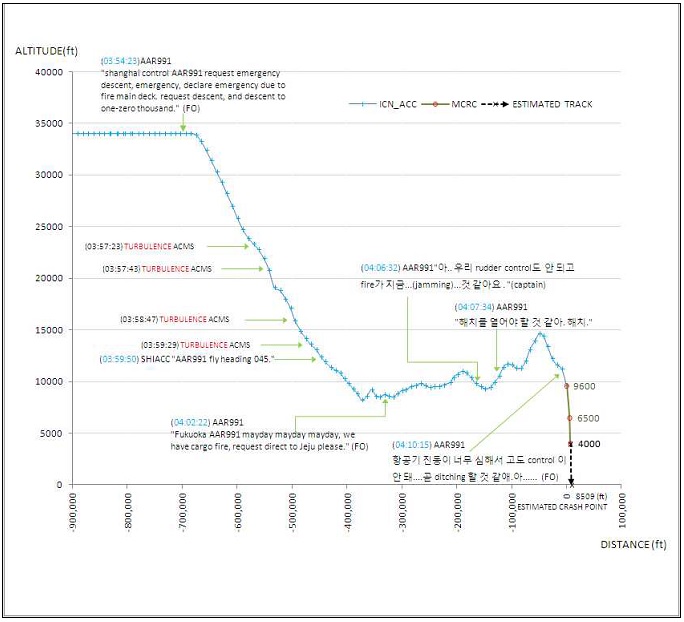 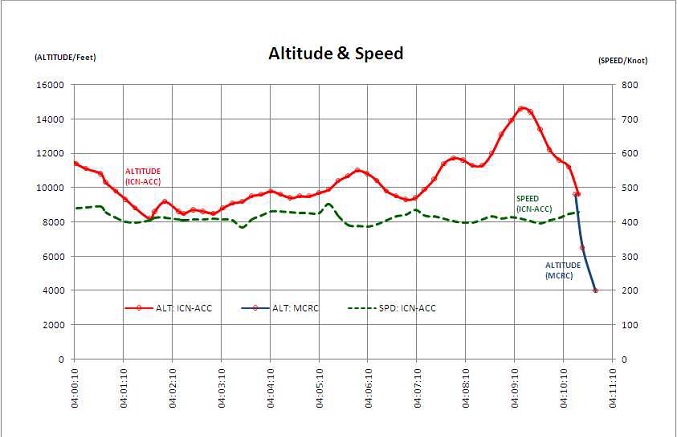 The available evidence showed that the fire had not spread aft of the rear pressure bulkhead but that about 3 or 4 minutes after the initial warning, smoke had "spread rapidly throughout the main deck cargo compartment" and "judging by the fact that a well defined soot trail was discovered on the exterior skin of the cockpit smoke evacuation shutter", smoke had then entered the flight deck.

Since no evidence could be found of non fire-related structural failure, aircraft systems malfunction or inappropriate flight management /aircraft handling, attention turned to the cargo on board. The Investigation found no evidence that pre-existing airworthiness issues had played any part in the fire or its effects and attention was focused on the cargo carried. It was established that all 58 tonnes of it had been loaded at Incheon in the period leading up to the departure. It had been distributed between 30 Pallets and 5 containers, with 24 of these 35 unit loads positioned on the main deck and the remaining 11 in the holds.

Declared Dangerous Goods were included in the load and were all found to have been on two adjacent pallets towards the rear of the main deck. They comprised three shipments of Class 3 (Flammable) products, one of a Class 8 Corrosive liquid and one consisting of 258.6kg of Class 9 lithium-ion batteries for use in hybrid electric vehicles. The Class 3 shipments were a total of 1800kg of two different types of synthetic resin respectively used for etching integrated circuits and in the manufacture of LCD flat panel displays, 22kg of special paint used for damp proof insulation of electronic circuits and 3kg of a lacquer for use in seal inspection, the latter shipment only being in transit from San Francisco. The Class 8 shipment was 8kg of 'ammonium derivatives' some for use as an anti-static agent and the rest for preventing dust from attaching to paint and impurities from attaching to various other surfaces. The Lithium-ion batteries were in transit from Osaka

All the declared Dangerous Goods items were found to have been packed and positioned in accordance with the applicable parts of the ICAO Dangerous Goods Regulations. After the two pallets containing them had been loaded onto the aircraft, the loadmaster notified their presence to the aircraft commander who had then “escorted the two dangerous goods pallets as they were loaded in ULD positions ML and PR” situated towards the rear of the main deck.

The Investigation established that the origin of the fire had been in the vicinity of these two pallets but was unable to establish it with any more precision from the available evidence.

The limited evidence of and potentially relevant to the flight crew response to the emergency was reviewed. It was noted that:

The formal determination of the Cause of the accident was that:

"A fire developed on or near the pallets containing Dangerous Goods but no physical evidence of the cause of the fire was found. The fire rapidly escalated into a large uncontained fire, and this caused some portions of the fuselage to separate from the aircraft in midair, thereby resulting in the crash."

A total of 20 Safety Recommendations were made by the ARAIB as follows:

It is noted that Having been closely involved in this ARAIB Investigation and in response to its own factual findings in the context of both the loss of another Boeing 747F in the UAE to an in-flight cargo-source fire less than a year earlier (B744, vicinity Dubai UAE, 2010) and FAA responses to earlier recommendations following the DC8-71F fire at Philadelphia in 2006 (DC87, Philadelphia USA, 2006) which were deemed unsatisfactory by the NTSB, the Board issued the following three new Safety Recommendations to the FAA on 28 November 2012:

The Final Report of the Investigation was completed on 24 July 2015 and published on 5 August 2015.

Following its participation in the investigation, the NTSB issued two Safety Recommendations on 9 February 2016 that respectively advocate:

The NTSB has noted that "lithium batteries carried as cargo can be both "a fire and explosion ignition source" and "a source of fuel to an existing fire" and that if subjected to overheating they "can create an explosive condition". It notes that current regulations "allow the loading of packages containing lithium batteries......in close proximity to packages of flammable materials and other classes of hazardous materials and also allows these materials to be stowed on board aircraft in large quantities in a single location" and thereby "constitute an unacceptable risk to the safe transportation of these hazardous materials. The Board "strongly believes the circumstances and findings in the Asiana Flight 991 accident show the need for new cargo segregation and loading density requirements" and that they should be "changed to be more stringent than the current ICAO requirements". It notes that the US Congress has explicitly authorised this "if it finds credible evidence of a deficiency in the international regulations that has substantially contributed to the start or spread of an on-board fire".

The NTSB believes that the circumstances and findings in the Asiana Flight 991 accident constitutes such credible evidence that demonstrates a deficiency in cargo segregation requirements that would permit the HMR to be changed to be more stringent than the current ICAO requirements.

The Text of the Recommendations is accompanied by a full justification for their issue.