On 25 July 2008, a Boeing 747 suffered a rapid depressurisation of the cabin following the sudden failure of an oxygen cylinder, which had ruptured the aircraft's pressure hull. The incident occurred 475 km north-west of Manila, Philippines.

On 25 July 2008, a Boeing 747-400 being operated by Qantas on a scheduled passenger flight from Hong Kong to Melbourne in day Visual Meteorological Conditions (VMC) was cruising at FL290 when it rapidly depressurised following the sudden explosive rupture of one of the emergency oxygen cylinders located in the forward cargo hold which entered the passenger cabin before falling from the aircraft. A MAYDAY was declared and an emergency descent made to 10,000 ft, after which the flight then diverted to Manila, Philippines. None of the 369 occupants was injured. 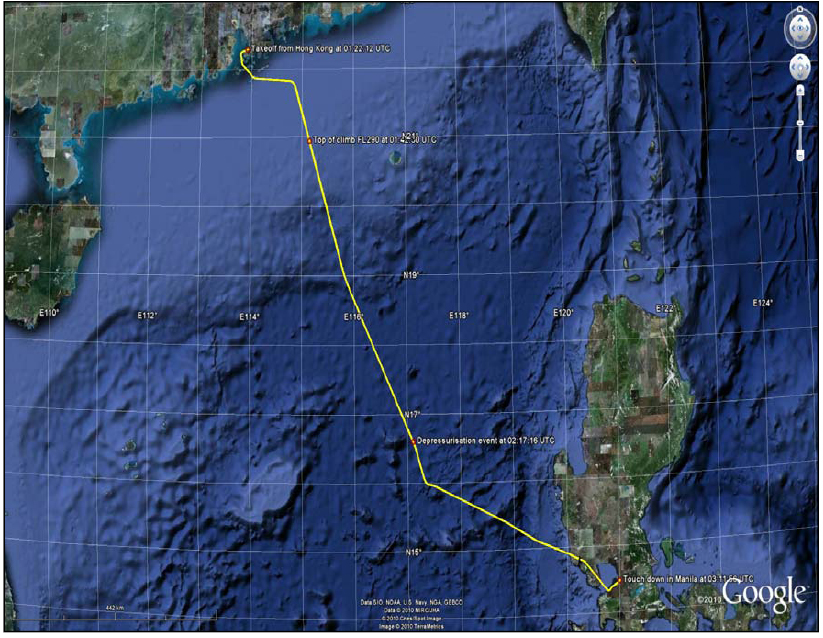 A plot of the aircraft track[footnote 1]

An Investigation was carried out by the Australian Transport Safety Bureau (ATSB). It was concluded that depressurisation of the aircraft had resulted from the sudden and forceful rupture of the fourth one of seven passenger emergency oxygen cylinders located along the right side of the aircraft’s forward cargo hold. The rupture created a hole of approximately 1.5 m x 2.0 m in size in the fuselage skin and another smaller hole in the cabin floor above was made by the majority of the ruptured cylinder as it was then propelled upwards into the passenger cabin immediately forward of the right wing root. The cylinder had then first hit the frame and handle of the R2 door and then the overhead cabin panelling, before dropping back down and through the cabin floor hole. As only the valve assembly from the cylinder was discovered, it was presumed that the remainder of it had then fallen from the aircraft through the fuselage hole, as it was not on board the aircraft after the flight.

After the pressure hull had been breached, the cabin, which had been at differential pressure (ΔP) relative to ambient of approximately 12.5 psi lost pressure to reach an estimated minimum differential of 5.25 psi over less than half a minute. This triggered the emergency supplemental oxygen system and deployment of passenger oxygen masks. The emergency descent to 10,000 ft had been commenced promptly and that altitude reached just under 7 minutes after the cylinder rupture. 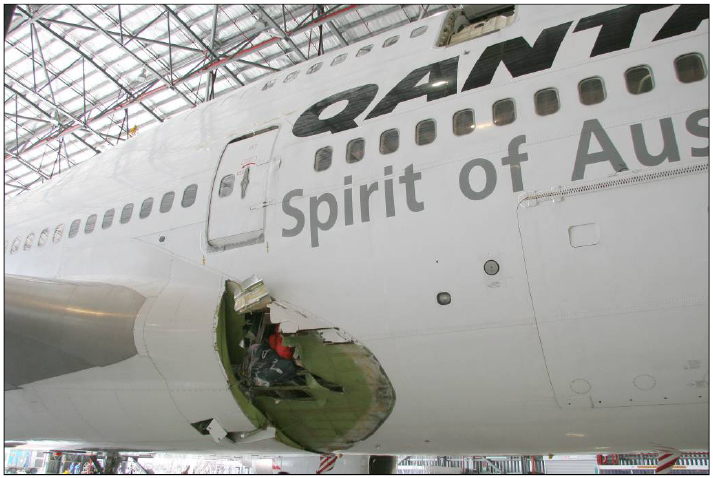 Based on evidence of the trajectory followed by the cylinder after it ruptured, it was deduced that the vertically stowed cylinder had failed by bursting through or around its base, where the calculated stress within the fully charged 1850 psi cylinder would routinely have been at its highest, as illustrated by the diagram below taken from the official report.

While it was considered that the cylinder may have been defective, flawed from manufacture or damaged in a way that promoted failure, there was no hard evidence found to support any of these propositions. However, the manner of the failure was characterised as “atypical” and was considered to favour either the presence of a pre-existing defect or the existence of some previous event which had weakened the cylinder and predisposed it to subsequent failure. 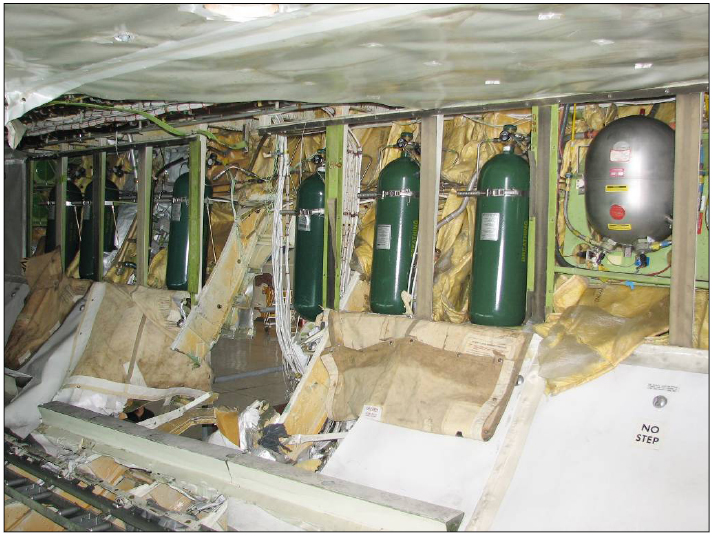 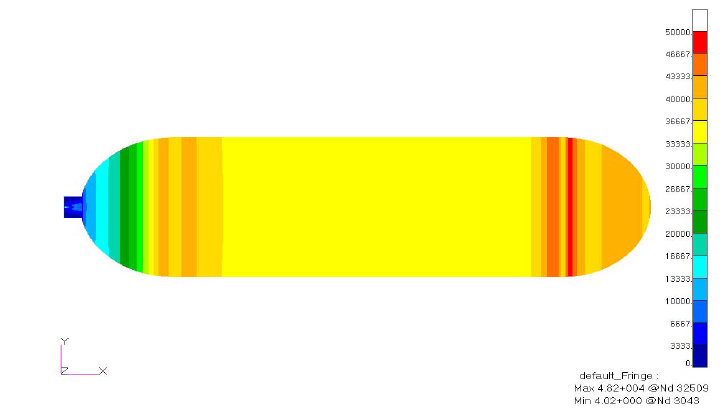 No evidence was found that would suggest that the procedures documented for the handling, maintenance and operation of the cylinder might have contributed to the risk of its failure and there was no record of the failed cylinder or its related systems sustaining any relevant prior damage.

The investigation found no previous instances of the same or a similar cylinder type having ruptured or forcefully failed whilst in service and no evidence that any aspect of the design and construction of the type of cylinder involved should have predisposed it to sudden failure. Other cylinders from the same production batch as the failed item were not found to have any increased risk of a similar premature failure. Overall, the testing and research conducted as part of the investigation was considered to have demonstrated that the cylinder type involved was of “an inherently robust and damage-tolerant design”.

In the absence of the cylinder, however, no Probable Cause could be established for its failure.

The flight crew were judged by the Investigation to have provided a “well-managed and appropriate emergency response” that minimised the risks associated with the depressurisation and the remainder of the flight. It was noted that following the depressurisation, various aircraft equipment had been inoperative, including one of the VORs, all three Instrument Landing System (ILS) systems and the left hand FMC.

The overall performance of the cabin crew was found to have been “effective and to have contributed directly to the continued safety of the passengers”. However, it was also found that Cabin crew training facilities did not appropriately replicate the oxygen equipment installed on the aircraft, including the drop-down oxygen mask assemblies. Several cabin crew were found to have become “partially and temporarily incapacitated” during the emergency response to the event.

No Safety Recommendations were made but various recorded Safety Actions were focussed on “ensuring that oxygen cylinder handling and maintenance procedures are optimal; that flight and cabin crew are suitably prepared for efficient management of a depressurisation situation; and that passengers are clearly and succinctly informed of their responsibilities and likely experiences during a situation that requires the use of the cabin oxygen masks”.

The Final Report of the Investigation was published on 22 November 2010 and may be seen in full at SKYbrary bookshelf: Aviation Occurrence Investigation AO-2008-053