On 7 November 2018, a Boeing 747-400F overran wet landing runway 14 at Halifax at night and was sufficiently damaged as a result of exceeding the available RESA to render it a hull loss. The Investigation attributed the overrun to a combination of factors including use of un-factored landing distance, momentary mishandling of the thrust levers just after touchdown, a pilot-caused lateral deviation diverting attention from deceleration, inadequate braking and late recognition of an approach tailwind component. Poor NOTAM presentation of runway availability also led the crew to believe that the longer and more suitable runway 25 was not available.

On 7 November 2018, a Boeing 747-400F (N908AR) being operated by Sky Lease Cargo on an international positioning flight from Chicago O’Hare to Halifax as KYE4854 with an augmented crew and one positioning crew member as a passenger overran the end of the landing runway 14 at destination by 270 metres after making a night VMC approach. None of the four occupants were injured but both the opposite runway direction approach ILS antenna and the aircraft sustained significant damage and various runway and approach lighting was also destroyed or damaged. The damage to the aircraft was sufficient to render it a hull loss. 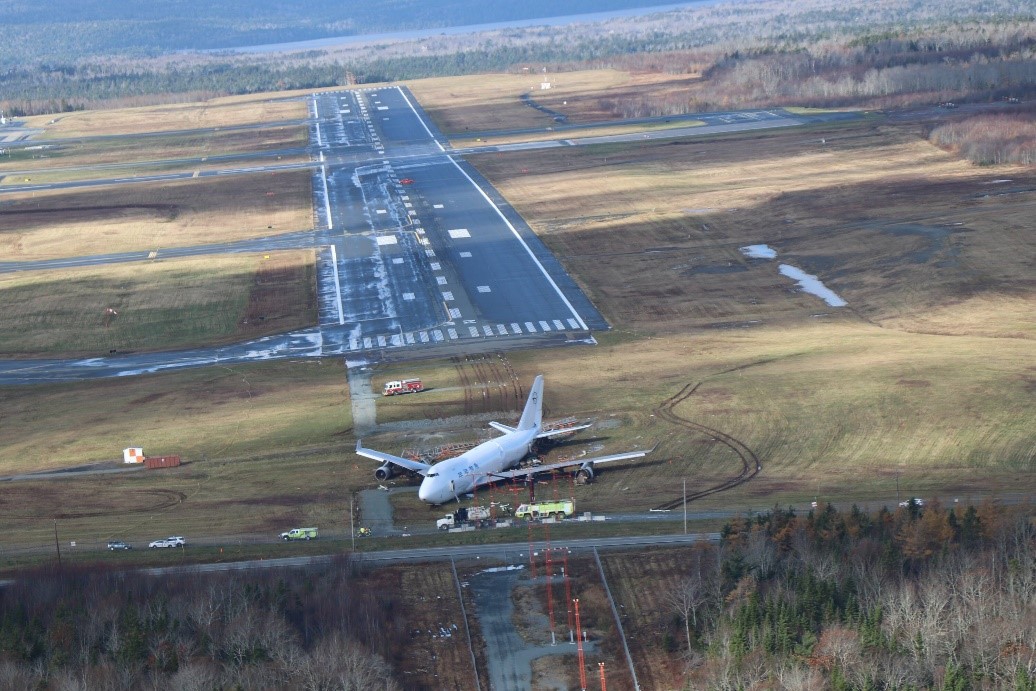 The aircraft as finally stopped with the abrupt end to the RESA visible behind the aircraft. [Reproduced from the Official Report]

An Investigation was carried out by the Canadian Transportation Safety Board (TSB) assisted by relevant data downloaded from both the DFDR and the 2 hour CVR. Recorded ATC data were also available.

The flight was the first leg of a multi-leg flight with final destination Changsha/Huanghua, China and was a positioning leg to load cargo before continuing to an en-route technical stop and crew change at Anchorage and the final destination. Departure from Chicago had been delayed by mutual agreement for 13½ hours because of poor weather at Halifax.

Pre flight preparation included receipt of flight paperwork by email to their hotel and a telephone briefing from flight dispatch about the route, the weather, and applicable NOTAMs. The positioning pilot was included in the pre-departure planning discussion on account of his relevant experience with the Company and the fact that he had operated into Halifax a week earlier. After reviewing the weather and NOTAMs for Halifax, the crew decided on a landing on runway 14 which was only 2,347 metres long compared to the 3,200 metre long runway 23.

Following a further one hour delay to the rescheduled departure time, the aircraft took off for the two hour flight to Halifax with the Captain as PF and the IRO occupying one of the flight deck supernumerary crew seats.

An hour into the flight, the Halifax ATIS weather was copied via the ACARS and noted as including a surface wind of 230° at 10 knots and the equivalent of 6nm in light rain and mist with the lowest cloud at 500 feet. It also included notification that the landing runway was 14, the runway 23 threshold was displaced and that the runway 23 and the runway 05 localisers were unserviceable. The crew “inferred that runway 23 was not available to them for landing” and an approach briefing was carried out for runway 14 which included the landing distance required for a flap 25 landing, an approach speed based on the ELW in the FMS and the intention to use autobrake 4.

Around 150 nm out, descent from FL 370 was commenced. When subsequently asked which approach they were requesting at Halifax, the crew confirmed a runway 14 ILS approach and was cleared direct to the IF at TETAR located on the extended runway 14 centreline 10.3 nm from touchdown. It was noted that just ahead of the accident flight, a Boeing 757 and a business jet had landed on runway 14 and another Boeing 757 had landed on runway 23 although the crew were unaware of this as they were not on the same frequency at the time and so continued in their belief that this runway was not available for landing.

Eleven minutes before the accident aircraft landed, and as it was descending through 13,000 feet and working the ACC frequency, it was noted that the Halifax TWR controller had advised the ACC controller that the arrival runway was being changed from 14 to 23 because of a change in wind direction and that an RNAV approach to it was available. This information was not passed to the accident flight which, four minutes later, was cleared for the previously requested runway 14 ILS approach. At about the same time, the ATIS was updated to include the change in arrival runway and the approach available to it and after this, the accident flight was transferred to Halifax TWR. On initial contact there, the controller advised that the surface wind was 260° at 15 knots and asked if the crew had the latest ATIS which they confirmed - although they subsequently stated that they had been unaware that runway 23 was available.

When the flight was 8.6 nm from touchdown, TWR advised that the wind direction was unchanged but the wind speed was now 16 knots gusting to 21 knots which the Investigation concluded amounted to “a steady 7-knot tailwind component”. The controller asked the crew to confirm whether runway 14 was still acceptable and received confirmation that it was upon which the controller responded by issuing a landing clearance and repeating the wind velocity.

It was noted that the TWR controller’s query as to the continued acceptability of runway 14 had prompted a brief conversation on the flight deck about the perceived lack of runway options but given the understanding that runway 14 was the only landing runway available, the 14 approach was continued and just after the 4nm range FAF (final approach fix) had been passed at the target VAPP of 164 KCAS (but also with a groundspeed of 185 knots), the crew discussed the presence of a tailwind although the VAPP was not changed and at 800 feet agl, the Captain reviewed the go-around procedure with the crew.

As the aircraft reached 1.7 nm from the runway threshold, its speed was still the same as the target VAPP with the groundspeed now 174 knots and the TWR controller gave a wind check of 250° at 15 -21 knots. Twelve seconds later, passing 400 feet agl, the AP and A/T were disengaged and the aircraft subsequently crossed the runway threshold at 62 feet agl, 8 metres to the right of the centreline before touching down firmly (1.75g) about 100 metres beyond the TDZ at VAPP+4 knots and with a crab angle of 4.5° (position 1 on the illustration below). 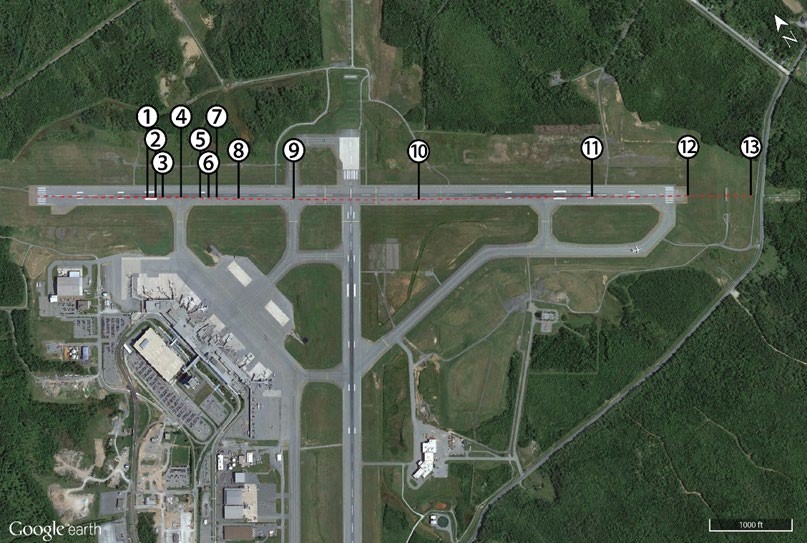 The progress of the landed aircraft along and off the end of the runway. [Adapted from the Official Report]

Thereafter, the sequence of actions recorded on the FDR was as depicted. The Captain stated that the post-touchdown deviation from the runway centreline to the right had surprised him and proved a temporary distraction from the need for effective deceleration. The recorded forward movement of the No 1 thrust lever went unnoticed as did the resultant brief retraction of the speedbrakes. The latter lasted 6 seconds during which 520 metres - 25 % of the 1925 metres of runway remaining ahead at touchdown – was used up. The Captain recognised that adequate deceleration was not occurring and initiated manual braking. Six seconds later, the aircraft ground speed was still 100 knots with less than 250 metres of runway ahead. The rate of deceleration increased marked and as the aircraft passed the end of the runway, the ground speed was down to 77 knots. Whilst within the RESA and still travelling at a groundspeed of 60 knots, the aircraft struck and destroyed the ILS localizer antenna which caused the  emergency escape devices inside the flight deck to be “projected from their storage compartment” and cause injury to the IRO.

The aircraft finally stopped with its nose 270 metres beyond the end of the runway and 21 metres to the right of the extended centreline on a heading of 166°M just 47 metres from a public road which ran just outside the airport perimeter. The No. 2 engine had separated from the wing and was jammed under the left horizontal stabilizer and tail section which caused a fire in the tail section of the aircraft after impact. The airport RFFS then arrived, extinguished the fire and discharged foam in order to prevent spilt fuel from igniting. The RFFS then evacuated the occupants through the main deck entry door (1L) using a ladder.

The overrun occurred as a collective consequence of a number of factors which included, in summary and in no particular order, the following:

It was found that although the landing runway surface had been wet, there was no evidence that viscous aquaplaning had occurred and this possibility was not therefore included in the identified factors which had contributed to the accident. However, both the potential consequences for crew alertness due to the timing of the landing being within the window of circadian low and more generally the effect of fatigue due to the significant flight departure delay were both identified as a potential context.

The aircraft damage consequences of the overrun

The Investigation noted that the available RESA of 90 metres in conjunction with a 60 metre runway strip was in accordance with the prevailing ICAO Annex 14 standard for a Code 3 or 4 runway but not in accordance with the recommendation that it should as far as practicable, extend from the end of the runway strip for 240 metres to make a total distance of 300 metres. It was also noted that a 150 metre RESA for runways such as 14 at Halifax only became a Canadian requirement in 2016. However, like Annex 14, this requirement did not include any requirements about the transition from the end of the RESA to terrain thereafter. In the case of the Halifax runway 14 RESA, this transition involved a sudden 2.8 metre drop just 16 metres after the end of the RESA which it was noted “does not meet ICAO’s recommendations for a 5% longitudinal slope for a RESA that extends for 300 metres past the end of the runway”. 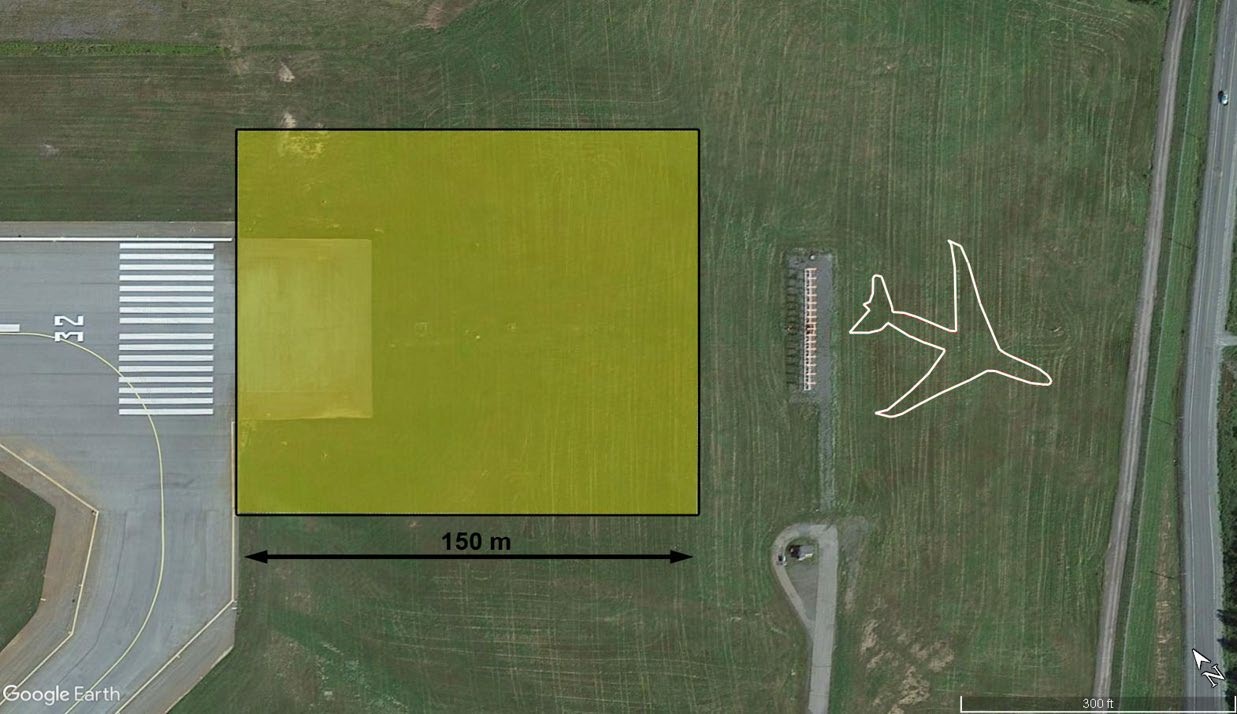 The Halifax 14 RESA, the sudden drop beyond it and the stopping position of the aircraft. [Reproduced from the Official Report]

It was noted that as a result of its investigation into the 2005 landing overrun at Toronto, the TSB had issued a Safety Recommendation, still not implemented at the conclusion of the current Investigation, that all Code 4 runways should have a 300 metre RESA or a means of stopping aircraft that provides an equivalent level of safety.

Seventeen Findings as to Causes and Contributing Factors were formally recorded as follows:

One Finding as to Risk was also formally recorded as follows:

The Final Report of the Investigation was authorised for release on 21 April 2021 and it was officially released on 29 June 2021. No Safety Recommendations were made.