On 11 November 2017, a type-experienced Boeing 747-400ERF crew making a night rolling takeoff at Maastricht-Aachen lost aircraft directional control after an outer engine suddenly failed at low speed and a veer-off onto soft ground adjacent to the runway followed. The Investigation found that rather than immediately reject the takeoff when the engine failed, the crew had attempted to maintain directional control without thrust reduction to the point where an excursion became unavoidable. The effect of startle , the Captain s use of a noise cancelling headset and poor alerting to the engine failure by the First Officer were considered contributory.

On 11 November 2017, a GE CF6-80C2B5F-engined Boeing 747-400ERF (TC-ACR) being operated by MyCargo Airlines on an international cargo flight from Maastricht to Jeddah for Saudia Cargo as SV916 left the side of the runway at Maastricht at low speed after a number 4 engine failure during its night normal visibility takeoff and ended up stopped in wet ground adjacent to the runway having sustained significant damage. 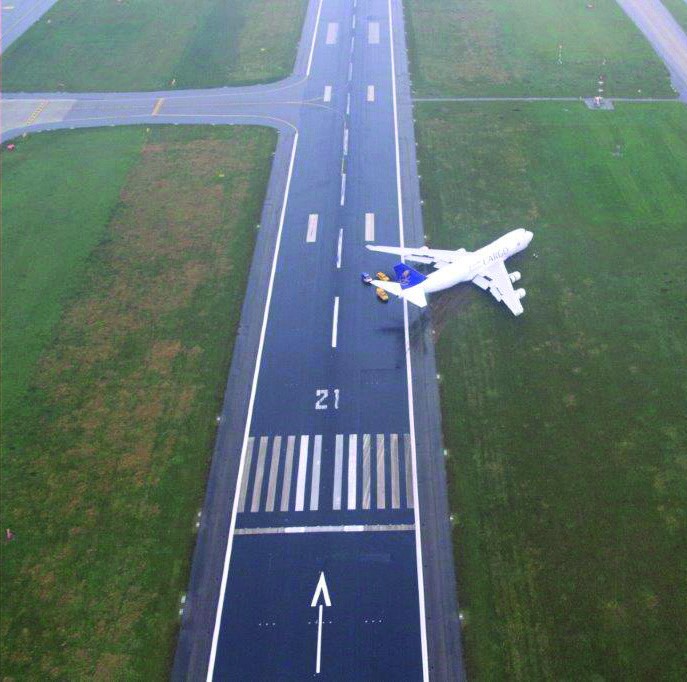 The aircraft in its final stopping position the following day. [Reproduced from the Official Report]

An Investigation was carried out by the Dutch Safety Board with relevant data successfully downloaded from the removed aircraft SSFDR and SSCVR.

It was established that after the Captain had sought and obtained a one hour extension to the beginning of the normal night closure of the airport, the flight crew were able to complete their pre departure flight preparations. It was found that although both pilots were as normal wearing their (active noise cancelling) headsets, the First Officer had been wearing his with one ear uncovered, a distinction that was to be of significance. After pushback and engine start, the crew decided that as the taxi distance to the full length runway 21 entry point which they would be using was only 300 metres, they would run both the ‘Before Taxi’ and ‘Before Takeoff’ Checklists before commencing taxi. SSFDR data showed that the aircraft was configured for a flap 20 takeoff. The prevailing weather conditions were benign with the reported surface wind being very light from a variable but generally westerly direction. Once the normal engine warm-up criteria had been met, taxi clearance was obtained and with takeoff clearance received, a rolling takeoff using de-rated thrust was commenced. The thrust levers were advanced initially to obtain around 42% N1 and once stabilised further to achieve approximately 70% N1 with a small amount of left rudder being applied. The required full takeoff thrust was then set using the TO/GA switches which engaged the A/T. Four seconds later, a loud noise was audible on the CVR which the First Officer (as well as the engineer and the loadmaster, neither of whom were wearing headsets) described as a “loud bang” coming from the right hand side of the aircraft. Just prior to this noise occurring, FDR data showed that, with the aircraft accelerating through 30 knots groundspeed, as the N1 for engine 4 reached 92% compared to the 82% of the other three engines, the engine 4 N1 suddenly dropped uncommanded to around 20% whilst engines 1, 2 and 3 remained stabilised at around 97%.

During subsequent interview, the Captain stated that he had not heard the “loud bang” and attributed this to the active noise cancelling function of his headset. However, he did notice that the aircraft had begun to yaw to the right but did not recognise why and had therefore instinctively attempted to correct this deviation using the steering tiller and left rudder and then adding some left rudder pedal toe brake. This initially led to a very brief and slight turn to the left but the deviation to the right resumed almost immediately. When the Captain recognised that the aircraft was approaching the right hand edge of the runway, he realised that it was uncontrollable and decided to reject the takeoff but it was too late to prevent the aircraft departing the side of the runway and immediately becoming bogged down in very soft ground and coming to a stop after reaching a maximum ground speed of 42 knots.

The First Officer stated on interview that although he had initially been monitoring the engine instruments during the takeoff, “he had not noticed any anomalies” and had soon shifted his attention to his air speed indicator. When he heard the loud “bang” noise from the right side of the aircraft and noticed that the aircraft was tracking to the right, he was recorded as having called out “off, abort, abort, abort”. In a subsequent interview, he stated that he had not known what had happened and had merely been “convinced” that the takeoff had to be rejected. Witnesses on the ground also heard the loud bang shortly after the takeoff started but nobody recognised what had caused it.

FDR data showed that the engine 4 N1 decrease began 160 metres from the start of the 2750 metre-long runway with full left rudder applied after a further 24 metres as the aircraft continued to deviate to the right. Braking commenced 60 metres after the point where engine 4 failed and after travelling a further 90 metres, the aircraft crossed the right hand edge of the runway as the recorded ground speed increased through 35 knots. Thrust was not reduced to idle until soon afterwards and the aircraft eventually stopped 363 metres from the beginning of the runway full length.

The event under investigation was reconstructed in a full flight simulator and one of the findings was that if the power of the remaining three engines is maintained for more than approximately 4 seconds after failure of the right outer (number 4) engine, the tendency of the aircraft to yaw to the right cannot be corrected. FDR data showed that contrary to the Captain’s recollections, he had in fact not reduced thrust to in order to begin rejecting the takeoff until 8 seconds after the thrust asymmetry due to the failure of engine 4 had begun. It was noted that “in the case of a full-rated takeoff, the available response time would be even shorter”.

It was also found from the tyre marks in the soft ground that the derived steering angles clearly exceeded the maximum steering angle of 7 degrees achievable using rudder steering alone and must therefore have been generated using the steering tiller. FDR evidence of the Captain’s control column inputs indicated that his right hand had remained on the control column until it was moved to the thrust levers to retard them to idle and initiate a rejected takeoff. This was both confirmation that he had indeed been holding and using the tiller throughout the event and his failure to keep his right hand on the thrust levers until reaching V1 as required by SOP which had directly contributed to the delay in initiating a rejected takeoff until it was too late.

Overall, it was surmised that the failure of the Captain to initiate a timely rejected takeoff may have been partly attributable to the delay in response to unexpected events attributable to the effect of “startle” as well as to the fact that his noise cancelling headset had prevented him hearing the noise of the compressor stall and his First Officer had not identified and communicated the nature of the failure.

Since even a sudden failure of a single engine on the aircraft type involved would not qualify on its own as a ‘Serious Incident’, the Investigation did not seek a detailed explanation of the cause of the engine 4 failure. However, some of the necessary engine strip down and repair work at the operator’s maintenance facility was observed and a number of removed High Pressure Compressor (HPC) components were examined by investigators to see if there was any evidence of a specific cause for the compressor stall. None was found and it was concluded that minor damage to the HPC blades was within AMM limits and had not precluded continued operation of the aircraft.

The Cause of the runway excursion was formally documented as “the pilot’s inability to maintain directional control under the conditions of prolonged asymmetric thrust that resulted from the loss of thrust on engine #4 at low speed due to a compressor stall”.