During the landing roll in normal the aircraft veered to the right and stopped with the nose landing gear off the side of the runway.

On 26 August 2008, a Boeing 747-400 being operated by Air France on a scheduled passenger flight from Paris CDG to Montréal landed on Runway 24R at destination and during the landing roll in normal day visibility veered to the right and stopped with the nose landing gear off the side of the runway. The final stopping position is shown in the picture below taken from the official report. There were no injuries and after a delay, the 509 occupants were disembarked from the aircraft onto buses. The aircraft was not damaged. 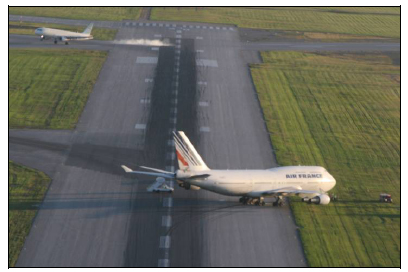 The B744 on the side of the runway

An Investigation was carried out by the Canadian TSB. A post-flight inspection found no aircraft system malfunction. It was noted that the aircraft commander had been PF and was making his tenth landing as PF since qualifying as an aircraft commander on type after four years on the Airbus 320 as his first command and considerable service as a First Officer on the Boeing 747 prior to that.

It was established that the aircraft had touched down within the touchdown zone and ground spoiler extension and thrust reverser deployment had occurred normally. Deceleration was constant and on runway heading with small rudder inputs in very light winds. Idle reverse thrust was selected at 80 knots and then at approximately 65 knots, the PF placed his hand on the nose wheel tiller and initiated a right turn that was stopped and corrected with momentary left rudder input. The aircraft continued on the runway centreline with a slight tiller deflection forward causing the nose wheels to be turned towards the right. At approximately 45 knots, as the thrust reversers were being stowed and the autobrake disengaged, the aircraft veered to the right. The PF responded with a combination of forward nose wheel tiller and full left rudder and the rate of turn increased rapidly. Maximum brake pressure was then applied and the aircraft came to a complete stop with the nose wheels 26 feet off the right side of the runway surface.

The investigation examined the nose wheel skid marks along the runway centreline and concluded that the steering tiller had initially been pushed forward and maintained in a forward position which corresponded to a nose wheel deflection of approximately 25° to the right. Initially, rudder steering was still effective and the PF was able to counter any tendency for the aircraft to turn right by using left rudder. And since autobrake was providing directional stability by applying even braking on all main landing gears, continued left rudder input was no longer required for the aircraft to remain on the runway centreline. Nose wheel skid marks straight down the runway centreline over the next 600 feet confirmed that the PF had unknowingly maintained forward tiller input throughout the deceleration.

In the light of PFs recent return to the aircraft type and his type operating history, the investigation considered the differences between the Airbus and Boeing systems for directional control on the ground and noted both the contrast between the two aircraft types and between the operation of the Boeing tiller in the left hand seat and in the right hand seat.

The Investigation noted that although the initial nose wheel tiller input could not be explained, the angular position of the PF’s arm was the same as it had been when it was on the control column one second earlier. It was therefore considered possible that the PF had inadvertently pushed the tiller forward thinking it was the control column.

The eventual excursion was found to have occurred as the aircraft slowed further since, as the thrust reversers were stowed and the autobrake was disengaged, the directional stability which had been provided by the autobrake plus the effect of the nose wheels re-establishing normal adherence with the runway surface caused the sudden veer to the right at about 45 knots. In reaction to this right turn, the PF applied full left rudder and intended to apply left nose wheel tiller command. Instead, he pushed the tiller further forward and down, which increased the nose wheel deflection to the right.

It was noted that in his previous time as a First Officer on the aircraft, such a forward and down input made on the right hand tiller would have produced a left nose wheel deflection. However, it was considered that the action could also be the result of an unintentional attempt to apply an A320-style side stick input, which would have been made at a lower and more left position than the position of the Boeing left hand side tiller.

It was also noted that had the PF released the steering tiller, it would have returned to the centre / neutral position and the turn would have stopped.

The Investigation findings as to Causes and Contributing Factors were that:

“The placement of the hand on the tiller at high speed resulted in an `unintentional tiller deflection, causing the nose wheels to skid when rudder was used to counter the turn. With his left hand already placed on the tiller, the pilot flying (PF) inadvertently pushed the deflected tiller further forward and down, resulting in an increased right turn, causing the aircraft to veer to the right and depart the runway surface.”

Release of the Final Report of the Investigation was authorised on 14 April 2010 and it may be seen in full at SKYbrary bookshelf: Aviation Investigation Report A08Q0171