On 31 October 2000, the crew of a Singapore Airlines Boeing 747-400 taxiing for a night departure at Taipei in reduced (but not 'low') visibility with an augmenting crew member present on the flight deck failed to follow their correctly-confirmed taxi instructions and commenced take off on a partially closed runway. The subsequent collision with construction equipment and resultant severe post crash fire destroyed the aircraft killing over half the 170 occupants and injured 71 others. All three flight crew survived.

On 31 October 2000, a Boeing 747-400 (9V-SPK) being operated by Singapore Airlines on a scheduled passenger flight from Taipei, Taiwan to Los Angeles as SQ006 commenced a night take off on a partially closed runway in reduced (but not low) visibility instead of on the runway instructed by ATC who were unaware of the error. The subsequent collision with construction equipment on the closed section of the runway used and the resultant severe post crash fire destroyed the aircraft fatally injuring 83 of the 170 occupants, seriously injuring 39 more and causing minor injuries to 32 others. All three flight crew survived and two of them as well as 23 passengers were uninjured.

Although Taiwan is not an ICAO Contracting State, an Investigation into the accident was carried out in all critical respects in accordance with Annex 13 principles by the designated investigation body in Taiwan, the Aviation Safety Council. Some differences in the presentation of the Findings in the concluding Report were acknowledged. The FDR, CVR and QAR were all recovered and their data were successfully downloaded.

It was confirmed that with the Captain as PF, the aircraft had failed to follow its correctly acknowledged ATC clearance along taxiway N1 and onto runway 05L, a 60 metre wide instrument runway with Cat 2 signage, markings and lighting. Instead, after turning right onto taxiway N1, at which point it should have continued straight ahead to reach the parallel Runway 05L from which it had been cleared to take off, it had turned prematurely to the right onto Runway 05R, a temporarily closed 45 metre wide non-precision runway. Impact with concrete barriers and construction equipment had occurred as the aircraft, at high speed, had approached a position abeam the terminal buildings situated between the two main parallel runways, 05L/23R and one designated 06/24. The impact and immediate fire which followed completely destroyed the aircraft. The Airport Rescue and Fire Fighting Services' reported that the fire which broke out had initially been brought as under control after 10 to 15 minutes, but then "flashback and re-ignition occurred" and it had not been fully extinguished until 40 minutes after the collision. There was only minor exterior fire damage to the rear section of the aircraft which had detached and become separated from the rest of the aircraft during the collision.

Although Runway 05R was subject to a Notice To Airmen available to the crew advising that it was closed part way along its length with the initial section available for taxi use only, it was found that there were no indications of its non-runway status readily available at the point on taxiway N1 where it was reached, which was almost immediately after turning right onto taxiway N1 from taxiway NP. It was also noted - and considered of significance - that there was no taxiway centreline marking across the 05R threshold, only one leading onto the 05R runway centreline. This latter centreline was also much more clearly lit than the continuation of the unmarked taxiway centreline straight ahead towards runway 05L, which had just one distant light operative preceded by one inoperative one. The diagram below shows the vicinity of the point where the wrong turn occurred and the disposition of taxiway centreline lighting. 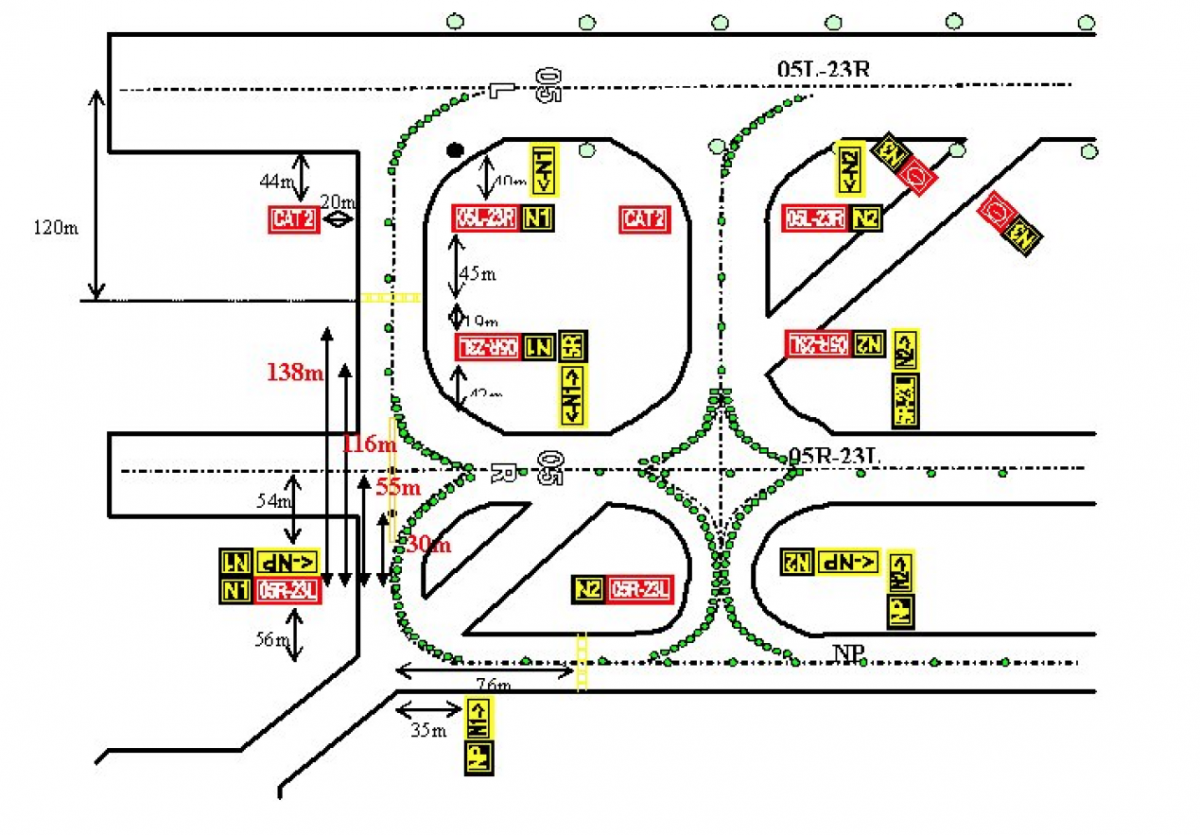 The layout, signage and centreline light spacing (lights in green) in the vicinity of the incorrect turn made from Taxiway N1 onto closed runway 05R (Reproduced from the Official Report)

It was noted that permanent conversion of Runway 05R to the status of a taxiway to be designated NC, was pending at the time of the accident and no change had been made to the runway status lighting at the south-western end of the runway.

Whist forward visibility was found not to have been such as to preclude normal taxiing, around the time of the attempted take off it was being reported as 600 metres in heavy rain, with similar RVRs given for both in-use runways. It was found from the CVR that the Captain had been reminded by his First Officer as the aircraft reached the end of taxiway NP that "next is November 1" and had responded " OK, second right" which had then been confirmed as correct by the First Officer. Take off clearance for runway 05L had just been received after changing to the TWR frequency when the aircraft reached the closely spaced illuminated green centreline lights leading onto runway 05R - the first rather than the second right turn. The Captain had proceeded to taxi the aircraft (slowly due to the potentially slippery wet surface) into position on runway 05R with no challenge from either of the other pilots except to note the failure of the aircraft position to match the Para Visual Display (PVD) which appeared to have been discounted by the Captain. Take off was commenced in the normal way soon afterwards but 21 seconds after the 80 knots call, the CVR recorded the Captain uttering an 'expletive' and exclaiming that there was "something there". One second later (some 33 seconds after the take off roll had commenced) the sound of the first impact occurred; the FDR recorded a ground speed of approximately 131 knots at the end of the recording.

It was concluded that the crew had failed to review their taxi route “in a manner sufficient to ensure they all understood that the route to Runway 05L included the need for the aircraft to pass Runway 05R before taxiing onto Runway 05L”. It was accepted that the limited forward visibility had prevented recognition of the obstructions further down the runway and considered that the association of the deteriorating weather with a typhoon approaching had constituted “moderate time pressure” to take off before the inbound typhoon closed in. The latter was considered likely to have “subtly influenced the flight crew’s decision making ability and the ability to maintain situational awareness.” However, it was also concluded that the “reduced visibility in darkness and heavy rain" had "diminished, but did not preclude, the flight crew’s ability to see the taxiway and runway lighting, marking and signage. In particular, centreline lighting on runway 05R was green rather than white and the edge lights "were most likely not on".

No evidence that the performance of any of the crew had been affected by fatigue or any other pre existing medical, behavioural or physiological factors or that there was any element of causation arising from lack of aircraft airworthiness.

Findings of the Investigation related to underlying Risk which had provided the context for the accident were noted as including:

Other Findings included that the Operators flight crew SOPs did not assign any specific duties to the augmenting First Officer present in the flight deck.

Notwithstanding these and other observations, the overall Finding Related to Probable Cause was that “the flight crew lost situational awareness and commenced take off on the wrong runway”.

A total of 59 Safety Recommendations were issued as a result of the Investigation as follows:

The Final Report was approved by the Council on 23 April 2002 and subsequently released on 30 April 2002.