On 3 September 2010, a UPS Boeing 747-400 freighter flight crew became aware of a main deck cargo fire 22 minutes after take off from Dubai. An emergency was declared and an air turn back commenced but a rapid build up of smoke on the flight deck made it increasingly difficult to see on the flight deck and to control the aircraft. An unsuccessful attempt to land at Dubai was followed by complete loss of flight control authority due to fire damage and terrain impact followed. The fire was attributed to auto-ignition of undeclared Dangerous Goods originally loaded in Hong Kong.

On 3 September 2010, the crew of a Boeing 747-400F (N571UP) being operated by UPS on a scheduled cargo flight from Hong Kong via Dubai to Cologne as UPS6 declared a MAYDAY due to a main deck cargo fire whilst about to reach their cleared level of FL320 22 minutes after take off from Dubai. An emergency descent and return to Dubai was initiated in night Visual Meteorological Conditions (VMC) but rapid smoke build up in the flight deck made it impossible to see enough to change radio frequencies and communications were continued using relay aircraft. An attempt to land back at Dubai was unsuccessful and during an attempt to reposition, the aircraft impacted terrain out of control. The aircraft was destroyed and neither pilot, the only occupants, survived. 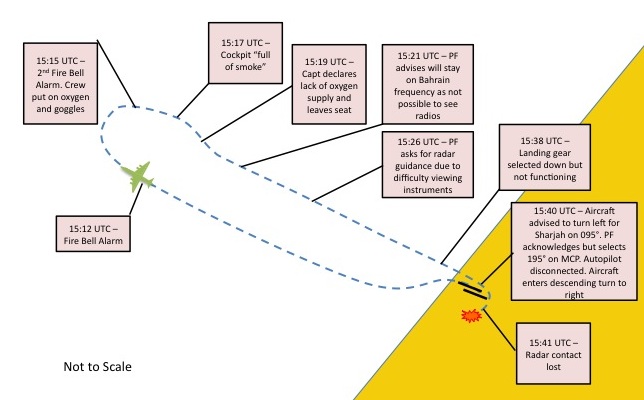 diagram showing the sequence of events on UPS 006. The diagram is not to scale.

An Investigation was carried out by the Air Accident Investigation Sector of the UAE GCAA. The FDR and 2 hour CVR were recovered from the accident site and their data were successfully downloaded.

It was established that the flight, with the First Officer as PF, had been uneventful until a 'Fire Main Deck' Warning was annunciated 22 minutes after take off as the aircraft was reaching its cleared level, FL320 and shortly after crossing into the Bahrain FIR and transferring to Bahrain ACC. Three seconds later, the Captain announced that he would take over as PF and followed up by stating that they were going to return (to Dubai). He then advised ATC of the fire indication and that they needed to land as soon as possible. Doha, at 100nm and 10'o'clock relative, was offered but the Captain replied that he wished to return to Dubai and then declared an emergency.

As part of the QRH response procedure, the 'Main Deck Cargo Fire Arm' switch was depressed, which shut down air conditioning packs 2 and 3 whilst pack 1 continued to supply preconditioned air to the upper deck. The effect of this, in the absence of any active fire suppression in Class E main deck cargo compartments, is to establish a pressure differential between the upper deck and the rest of the aircraft thus preventing smoke or fumes entering that part of the aircraft. Both pilots donned their oxygen masks but had initial interphone communication difficulty that was subsequently resolved. The aircraft was put into a right turn and a descent to FL280 was begun. Then, shortly after the crew rest area smoke detector had activated and less than 3 minutes after the fire warning, the Captain suddenly requested and was immediately approved for an immediate descent to 10,000 feet. The AP was then disengaged but the Captain had difficulty controlling the aircraft manually, specifically in pitch and re-engaged the AP which restored control. It was found that the only remaining air conditioning pack was no longer functioning and smoke began to enter the flight deck. The Captain called for the smoke shutter to be opened because of the smoke ingress and the crew succeeded in setting for an ILS approach to runway 12L at Dubai as the increasing smoke appeared to have rapidly made it impossible to see the instruments.

Seven minutes after the fire warning with the cabin altitude at around 21000 feet, the Captain remarked on the high temperature in the flight deck and then almost immediately, his oxygen supply suddenly failed. The First Officer took over as PF again as the Captain left his seat in order to locate an alternative Oxygen supply. The CVR did not record any "further interaction from the Captain or enquiry by the First Officer as to the location of the Captain or the ability of the Captain to respond". Pathological information subsequently established that the Captain had "lost consciousness due to toxic poisoning".

The First Officer advised that he was unable to see enough in the smoke to be able to change the COM 1 radio frequency to Dubai and shortly afterwards communications continued using relay by other aircraft. For a short period approximately 20 minutes after the fire warning, the First Officer made MAYDAY calls on 121.5 on COM2 but no two way contact was established and Dubai ACC calls to the aircraft in 121.5 did not appear to be heard either.

By now it was quite dark. The aircraft reached an intercept heading for the Dubai ILS but at 350 KCAS and 9000 feet altitude was too high and Dubai was over flown north of the runway after the First Officer had replied "negative" when asked if an orbit to reposition on final was possible. The flight was offered runway 30 at Sharjah, which with the aircraft approaching at 4000 feet was 10 nm away to the north east and would require a left turn. The radar heading given - 095º - was acknowledged but instead the aircraft turned right - subsequently this was found to have been because a heading of 195º had been set. Soon afterwards (see the diagram below) the AP was disconnected and as the descent continued, FDR data subsequently showed that pitch control had been lost "due to the de-synchronisation of the control column inputs and the elevators". An uncontrolled descent into terrain followed and, after 59 seconds of EGPWS 'PULL UP' Warnings, impact had occurred 9nm south west of Dubai Airport just under 30 minutes from the time of the fire warning. 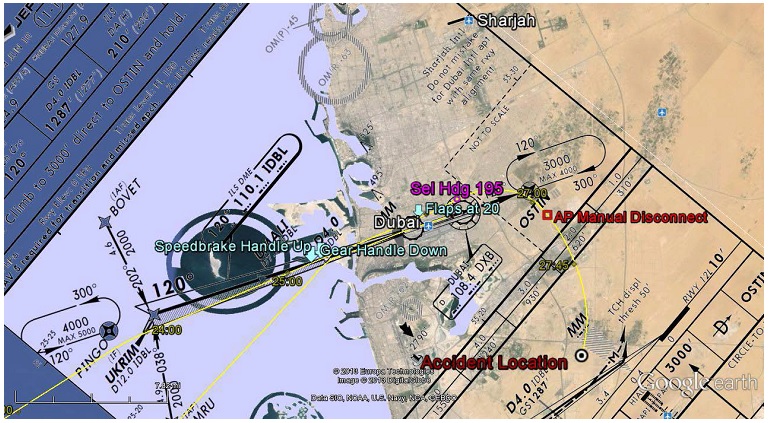 The aircraft was completely destroyed by the ground impact and a fire with some infrastructure damage but no ground casualties. It was found that the fire prior to impact - the origin of which was traced to undeclared Class 9 Dangerous Goods which had been loaded in Hong Kong - had "resulted in the exposure of primary structural elements, components and assemblies to significant heat damage" and exposed the flight deck area to "continuous smoke and toxic fume penetration". It was concluded that the fire had “severely damaged significant systems leading to failures in aircraft controllability and crew survivability systems, failures which interfered with the normal flight management, directly with the aircraft controls and with the crew supplementary oxygen system supply". It was noted too that the fire had already caused "severe damage to flight control systems" less than three minutes after the fire warning.

The Investigation found that "at some point along the flight route, a failure event occurred that provided an ignition source to nearby flammable materials leading to an in-flight fire" with this fire then spreading and increasing in intensity rapidly. The consequences of the fire were damage to numerous critical systems which created an unsafe condition and led directly to the loss of the aircraft. A series of Primary Factors were identified including the following:

The Investigation examined the potential effect on the outcome of the decision to return to Dubai rather than divert to Doha, which had increased the required track miles from about 100 nm (estimated at about 20 minutes to a landing) to 180 nm and led to the complication of relay communications for the single remaining pilot. However, it was considered that the likely outcome of a diversion to Doha was "inconclusive".

The Causes of the accident were formally documented as follows:

A total of 13 Contributing Factors were identified as follows:

36 Safety Recommendations were made by the AAIS upon the conclusion of the Investigation as follows:

Structural-acoustic coupling phenomenon in an aircraft fuselage is a known characteristic. In large Class E cargo compartments, the structural and acoustic modes can be derived for vibration analysis. Structural and acoustic analysis could determine possible occurrences of vibration in the fuselage structure during predetermined phases of flight where the vibro-acoustic signatures can be used to determine the principle sources and transmitting paths of the vibration.

Further investigation can be performed by the manufacturers of large cargo aircraft and/or the operators of these aircraft to investigate the vibration and acoustic signatures of the cargo areas for harmonic acoustic vibration resulting from the combination of engine and fuselage vibration.

Currently there is no data for the class E cargo compartments of the B744F, If such data was available through a process of acoustic mapping for structural-acoustic coupling, this data could be used to expand the UN Manual of Tests and Criteria Para. 38.3.4.3 Test T.3: Vibration test and verification data.

This could (be obtained) through a process of acoustic mapping (of) the cargo compartment interior and measuring the vibro-acoustic interior vibration and (the) vibration and resonance of the airframe structure. (Refer to GCAA SR 57/2013) (SR 49/2013)

The purpose of this testing is to determine the safe limits for the air carriage of lithium type batteries in dynamic aeroelastic, vibrating structures where the battery electrolyte, composed of an organic solvent (and dissolved lithium salt), could become unstable when exposed to these forms of mechanical energy. (SR 50/2013)

Structural-acoustic coupling phenomenon in an aircraft fuselage is a known characteristic. In large Class E cargo compartments, the structural and acoustic modes can be derived for vibration analysis. Structural and acoustic analysis can determine possible occurrences of vibration in the fuselage structure during predetermined phases of flight where the vibro-acoustic signatures can be used to determine the principle sources and transmitting paths of the vibration.

Given the active failure modes of lithium batteries, the battery risk factors concerning possible susceptibility to various extraneous forms of mechanical energy, for example vibration, possibly in a harmonic form, could be an initiating action risk.

The ICAO Dangerous Goods Panel is requested to evaluate data relative to the UN Manual of Tests and Criteria, Lithium Metal and Lithium Ion Batteries, 38.3.4.3, Test T3-Vibration and advise the UNECE Committee of Experts/Working Party on the Transport of Dangerous Goods if additional criteria should be adopted for the carriage lithium metal and lithium ion batteries by air transport. (Refer to GCAA SR 49/2013) (SR 57/2013)

The National Transportation Safety Board (USA) (NTSB) assisted with the Investigation in various ways and in the light of its early findings and those from the 2011 Asiana 747 Freighter fire, the Board commissioned a Fire Safety Study to examine the characteristics of lithium ion battery fires. The resulting NTSB Materials Laboratory Study Report 12-019 completed on 21 March 2012 was used in support of the issue, on 28 November 2012, of three NTSB Safety Recommendations to the FAA on the subject of the fire hazard in cargo aircraft on the following subjects:

The Final Report of the Investigation was published in 24 July 2013.