On 20 November 2011, a problem in reading the altitude labels on the ATC radar control display led to a Finnair Boeing 757 being cleared to make a descent which brought it into proximity with a Thomas Cook Boeing 757 in day VMC. Co-ordinated TCAS RAs were generated onboard both aircraft but when the Finnair aircraft failed to respond to its Climb RA and continued descent, the other aircraft, which had responded correctly to its initial RA, received a further RA to reverse their descent to a climb. The Finnair aircraft reported retaining visual contact with the other aircraft throughout.

On 20 November 2011, approximately 100 nm north of Tenerife, Canary Islands, separation was lost in day Visual Meteorological Conditions (VMC) between a Boeing 757-200 being operated by Finnair on a non-scheduled passenger flight from Helsinki to Tenerife South and another Boeing 757-200 being operated by Thomas Cook AL on a non-scheduled passenger flight from Manchester to Tenerife South. None of the 460 occupants of the two aeroplanes were injured during the TCAS RA manoeuvres that followed.

It was found that a fault in the ATC radar system has led to the label for the Thomas Cook aircraft temporarily disappearing from the radar screen and being replaced by two labels, one showing the correct level of FL370 and another showing FL405, with the Finnair aircraft still showing FL390. On the basis of this information, the controller had instructed the Thomas Cook aircraft to descend to FL390. On being advised by the aircraft crew that they were already at FL370, a new instruction was given to turn 30° right. Immediately after this transmission, the Finnair aircraft stated “please confirm we were cleared to descend to level 250. We had a TCAS RA”, in response to which the controller responded in the affirmative.

Following a simulation of the encounter, (see the diagram below) the Investigation concluded that “the aircraft were on slightly divergent flight paths. The TCAS was activated when the aircraft flew within the protective airspace of the TCAS, which at that altitude was 1.3 NM and 700 ft.” The required minimum separation in the airspace involved was 5nm and 1000feet with the achieved separation recorded as 300 feet vertically (Finnair above Thomas Cook) at 0.7nm followed 5 seconds later by 100 ft vertically (Finnair below Thomas Cook) at 0.9nm. The respective radar tracks are shown on the diagram below. 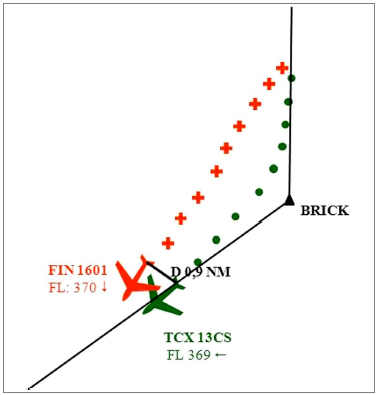 Investigation of the radar display fault found that it “seems to fit the characteristics of garbling sometimes seen in non-Mode S radars when the oblique distances between each aircraft and the respective radars are very similar”. It was further noted that “given this similarity in the distance, an overlap occurred in the reply received by the radars from the aircraft, resulting in new tracks appearing on the screen and in the label for (the Thomas Cook) aircraft splitting from the corresponding aircraft symbol.” However, it was noted that the flight progress strips for the two aircraft showed the correct flight levels for both aircraft prior to the issue of a descent clearance to the Finnair aircraft.

The Investigation noted that the Finnair crew should have immediately respond as indicated to any TCAS RA even if contrary to ATC instructions and should never execute manoeuvres in the direction opposite to that indicated by a TCAS RA.

The formal statement of the Investigation in respect of Cause of the Incident concluded that it arose because of “the clearance given by the controller to (the Finnair) aircraft) to descend from flight level 390 to 250, crossing through the flight level being occupied by (the Thomas Cook) aircraft, FL370, resulting in a violation of the minimum radar separation distance prescribed.”

It was also considered that the following contributed to the incident:

Two Safety Recommendations were issued as a result of the Investigation:

The English translation of the Final Report was published shortly after the original Spanish report in October 2012.