On 20 October 2013, a Boeing 757-200 Co-Pilot believed his aircraft was at risk of stalling when he saw a sudden low airspeed indication on his display during a night descent and reacted by increasing thrust and making abrupt pitch-down inputs. Other airspeed indications remained unaffected. The Captain took control and recovery to normal flight followed. The excursion involved a significant Vmo exceedance, damage to and consequent failure of one of the hydraulic systems and passengers and cabin crew injuries. The false airspeed reading was attributed by the Investigation to transient Ice Crystal Icing affecting one of the pitot probes.

On 20 October 2013, a Boeing B757-200 (N41140) being operated by United Airlines on a scheduled international passenger flight from Newark to Dublin experienced turbulence during descent at night in IMC. Inappropriate control inputs by the co-pilot PF in response to false airspeed indications caused passenger and crew injuries and system damage also occurred. ATC were advised that medical and emergency services would be required on arrival. Thirteen of the 131 passengers and four of the six cabin crew sustained minor injuries and significant damage to one of the hydraulic systems was confirmed.

An Investigation was carried out by the Irish AAIU. Data from the FDR were successfully recovered but relevant data on the CVR had been overwritten because its CB had not been tripped. It was noted that "the non-availability of the CVR denied the Investigation the opportunity to fully understand the cockpit environment at the time of the occurrence and to accurately account for the communications, discussions and actions of the Flight Crew as they responded to the unfolding events". The Investigation noted that United Airlines' Manuals in respect of access to recorders and the tripping of the CVR CB after a Serious Incident did not correspond to the requirements of ICAO Annex 6.

It was noted that "the Commander initially appeared to be unaware of his obligations with regard to the requirements and conduct of a safety investigation in a foreign state". However, "following a briefing from an AAIU Inspector", the Commander provided a verbal statement and the First Officer provided "a frank, verbal, statement", both of these being obtained on board the aircraft shortly after its arrival in Dublin.

The 59 year old Captain informed the Investigation that he did not keep a logbook but stated that he had accumulated around 32,000 total flying hours. United Airlines were able to provide details of his hours whilst in their employment and these included 8,769 hours on type. The 43 year old First Officer had accumulated 12,010 total flying hours which included 5,384 hours on type. The First Officer was PF for the investigated flight.

It was established that whilst descending towards destination at 300 KCAS and 1500 fpm and passing approximately FL250, with the seat belt signs already selected on, turbulence had been encountered and shortly afterwards, precipitation had been entered. The First Officer stated that "when the turbulence subsided" he noticed a very low indicated airspeed on his instrument display and "believing that the aircraft was about to stall, immediately pushed the control column forward and applied full power without disengaging the autopilot or autothrottle". He stated that following this, his airspeed “went back up into the normal range”, but as soon as he began to raise the nose and reduce power, “it went back into a stall - or the indications of a stall” and he had "commenced a second pitch down manoeuvre".

It was then ascertained that (only) the First Officers airspeed indication was false and so the Captain had taken control and returned the aircraft to normal flight. When the First Officer’s airspeed indications returned to normal, he had handed control back. At this time, an EICAS indication of a loss of hydraulic pressure in the centre hydraulic system was seen and the relevant checklist was actioned. A report was received from the cabin that the excursion from normal flight had resulted in "minor impact injuries" being sustained by some passengers and some members of the cabin crew.

ATC were advised that as a result of an encounter with "severe turbulence" medical assistance was required on arrival because some passengers had been injured. AFS attendance was also requested because of the loss of the centre hydraulic system. The remainder of the flight was subsequently completed without further event. However, on inspection it was found that the aircraft had sustained "significant damage" to the structure of the centre hydraulic system servicing bay which had led to the indicated loss of system pressure (see the illustration below). One cabin ceiling panel was also found to have been impact-damaged during the event. 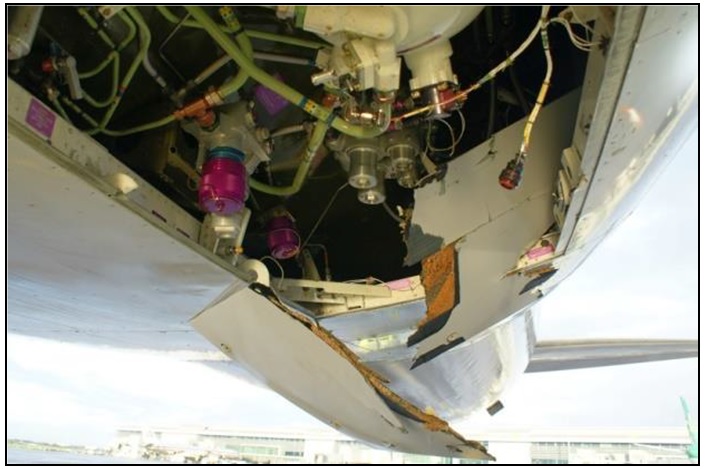 Damage to the hydraulic service bay and its associated structure. [Reproduced from the Official Report]

Minor injuries were found to have been sustained by 13 passengers and four of the cabin crew.

The Investigation obtained written statements from both pilots. It was noted that the Captain "made no mention in any of his reports, of any communications between himself and the Co-Pilot regarding the manoeuvres performed by the Co-Pilot during the event". The Co-Pilot stated that he had mistaken the overspeed warning which had occurred during the event for a stall warning. Neither pilot reported noticing the EICAS 'IAS DISAGREE' Alert during the event or the Master Caution annunciation which would have accompanied it. It was considered that although the FDR had no record of this, the recording of such activation was only sampled on a discrete basis every 64 seconds so "it is probable that (such an Alert) was generated". It was noted that previously investigated unreliable airspeed events had also found that pilots' "have not recognised" this annunciation.

FDR data showed that the rate of descent during the First Officer's intervention had briefly reached 12,000 fpm. Airspeed had reached 380 KCAS (30 knots above the AFM Vmo), pitch attitude ranging between -4.4º and -16.2º and the maximum negative 'g' loading had reached -0.36g. Control column pitch inputs had begun around 2 minutes after the initial encounter with turbulence which had all but ceased prior to the onset of a series of abrupt thrust lever and control column inputs, which had then lasted about 20 seconds. The AP and A/T were recorded as having remained engaged throughout. The airspeed had remained above Vmo for most of a period lasting just over a minute and the Master Caution activated by the 'IAS DISAGREE' Alert had annunciated for just over 20 seconds.

Boeing was reported to have noted that since the event had been an "unreliable airspeed" occurrence it should have triggered the corresponding response detailed in the QRH. They also considered that the aircraft had "behaved as expected" in response to the control inputs and control surface deflections.

United Airlines stated that the crew had recently completed a self study portion of the "Continuing Qualification Training Programme" which covered unreliable airspeed events. However although Boeing stall guidance was found to direct pilots to initiate the Approach to Stall or Stall Recovery manoeuvre as published in the QRH, United Airlines informed the Investigation that their QRH did not contain Stall Recovery procedures which were instead provided in the "Operator’s Flight Manual".

Weather conditions in the vicinity of descent flight path at the time of the event were confirmed by the Irish Meteorological Service as having been conducive to at least moderate turbulence and concluded that "ice crystals were likely to have been present at the time the incident occurred and at the levels at which the incident occurred" and that they "would have been the predominant water phase”. In respect of the likely size of water droplets also present, they noted that the available evidence suggested they would have been "large" and therefore capable of detection using aircraft weather radar. Boeing noted that the recorded SAT at FL235 had been -37º C and that the aircraft had probably flown through "a small cold core thunderstorm" which had significant ice crystal content present in its core.

The Investigation noted that that the aircraft type involved benefited from 'Grandfather Rights' in respect of its airworthiness certification and was not required to comply with the current FAA standard for pitot probe ice protection which has extended the definition of icing conditions requiring system protection to include convective cloud ice crystal conditions.

In respect of Human Factors, the following were considered:

The considerable history of inappropriate flight crew response to the sudden onset of one or more unreliable airspeed indications attributed to ice crystal icing or other causes was noted during the Investigation and a number of these events were explicitly identified, including:

The significant Conclusions of the Investigation included the following:

It was determined that the Probable Cause of the event was "non-standard Flight Crew response to an unreliable low airspeed indication resulting from a temporary blockage of the right main pitot probe due to ice crystal icing".

A Contributory Factor was determined as "startle effect due to a sudden unexpected indication of low airspeed, following an encounter with turbulence".

Eight Safety Recommendations were made as a result of the Investigation as follows:

The Final Report of the Investigation was published on 10 May 2016.