On 11 March 2011, a Delta AL Boeing 757 departed Atlanta GA with no secondary radar indication visible to ATC and also failed to make contact with departure radar after accepting the frequency transfer instruction. During the eight minutes out of radio contact, it successively lost separation against two light aircraft and another passenger aircraft as it followed the cleared RNAV departure routing for eight minutes until the crew queried further climb on the TWR frequency and were invited to select their transponder on and contact the correct frequency.

On 11 March 2011, a Boeing 757 being operated by Delta on a scheduled passenger flight from Atlanta to New York La Guardia failed to make the acknowledged frequency change after take off and was also not showing an SSR squawk. Contact was eventually established when the flight crew queried being held at FL100 on the TWR frequency they had previously acknowledged and it became apparent that they had failed to select their transponder from SBY (stand by) prior to take off. The Incident occurred in day Visual Meteorological Conditions (VMC).

An Investigation was carried out by the National Transportation Safety Board (USA) (NTSB) using recorded ATC data, interviews with ATC personnel and statements from the pilots involved.

It was found that the First Officer, who had been designated PM, had omitted the action to set the transponder to TA/RA as required in the Operations Manual once the flight had been cleared for pushback or engine start and then omitted the item from the Checklist without the aircraft commander noticing. After take off from runway 27R, the PM had acknowledged the frequency change to TRACON given by TWR but taken no action on it. The RNAV SID was followed as cleared and when, some eight minutes later, the aircraft commander asked ATC if they could expect climb above FL100, it became apparent that they were still on the TWR frequency. The position of the aircraft when eventually positively identified was 20 miles east of the airport, having flown the left hand turn and subsequently established on a north-easterly track required by the SID. 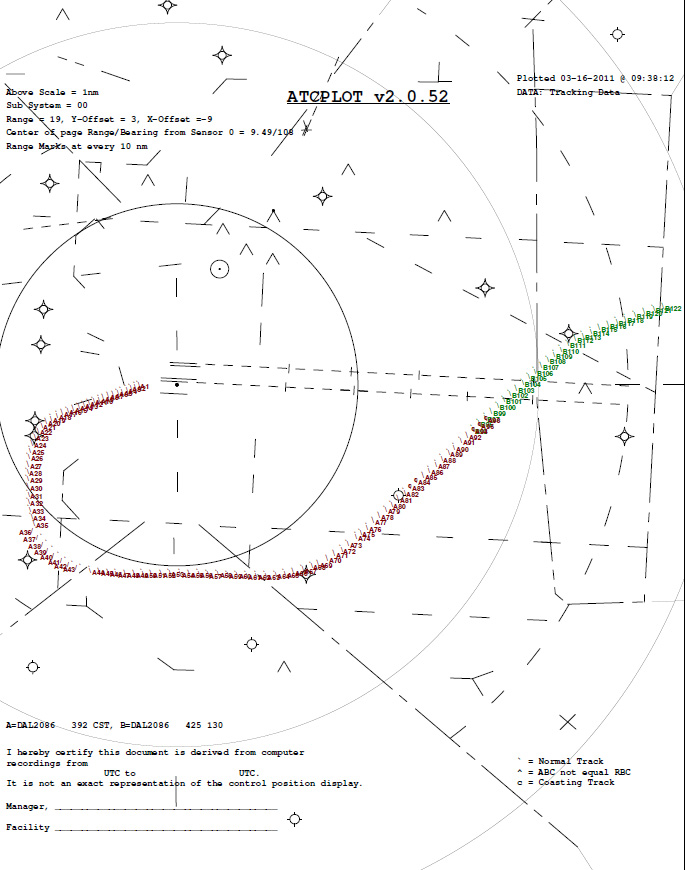 The flight crew indicated that they believed that the failure to set the transponder may have been a consequence of the relatively abnormal requirement to start engines on the parking gate because of an inoperative APU air system. The crew noted that they had been routinely monitoring 121.5 on the second radio box throughout the episode.

It was established that TWR controllers were expected to routinely verify transponder squawk transmission but that the controller involved had not done this and believed that this may have been because his attention had been briefly diverted to another operational matter. It was noted that the extant LoA between the TWR and the TRACON included a requirement for TWR to verify the auto acquisition of the (SSR) data tag within five miles of the departure end of the runway. It was also noted that the expectation of TWR ATC was that when an aircraft was transferred to the departure frequency it would usually contact that frequency by the first fix on the RNAV route. In the opinion of the TWR supervisor on duty at the time of the Incident, failure of the SSR tag to appear occurred "fairly often” although this could occur for a number of different reasons.

A review of the primary radar data for the period when the aircraft was effectively out of contact with ATC in busy terminal airspace found that prescribed separation had been lost successively against three other aircraft, a Beech 55 (1.44miles), a Pilatus PC12 (0.81 miles) and an Atlantic Southeast Airlines CRJ-100 inbound to Atlanta on a scheduled passenger flight.

The Probable Cause of the event was determined as "the air traffic controllers’ failure to adhere to required radar identification procedures, which resulted in loss of separation between the departing Boeing 757 and three other airplanes”.

A Contributory Factor was identified as “the pilots’ inadequate preflight checks, which resulted in the airplane departing with an inoperative transponder.”

The Final Report of the Investigation was published on 7 August 2012. No Safety Recommendations were made.