On 8 August 2017, a Boeing 767-300 departing Delhi was pushed back into a stationary and out of service Airbus A320 on the adjacent gate rendering both aircraft unfit for flight. The Investigation found that the A320 had been instructed to park on a stand that was supposed to be blocked, a procedural requirement if the adjacent stand is to be used by a wide body aircraft and although this error had been detected by the stand allocation system, the alert was not noticed, in part due to inappropriate configuration. It was also found that the pushback was commenced without wing walkers.

On 8 August 2017, a Boeing 767-300 (EY-AMG) being operated by Ethiopian Airlines on a scheduled international passenger flight from Delhi to Addis Ababa as ET 687 was in collision in normal night visibility with an Air India Airbus A320 (VT-EXD) which was parked out of service on the adjacent stand. There were no injuries to any of the occupants but both aircraft were damaged.

It was established that with the 767 already parked on the Terminal 2 remote stand 87, the A320 arrived from Jeddah later the same day and was parked on the adjacent stand 86L where it remained out of service. Just over four hours later, the 767 was boarded and ready for departure and the ramp team from Celebi Ground Handling Delhi, contracted to serve Ethiopian Airlines since 2011, was in attendance in order to perform the necessary pushback.

After obtaining clearance to push back from ATC, it was commenced but after 14 metres of the pushback movement had been completed, the right wing of the 767 hit the left wingtip of the A320. Damage to the 767 wing was to the aileron assembly and its attachment, the lower wing skin and the wing rear spar and upper and lower T-chords. The A320 damage was confined to the left wing ‘sharklet’ which was penetrated by approximately 60 cm of the 767 wing but it was also moved sideways by approximately 1.5 metres. 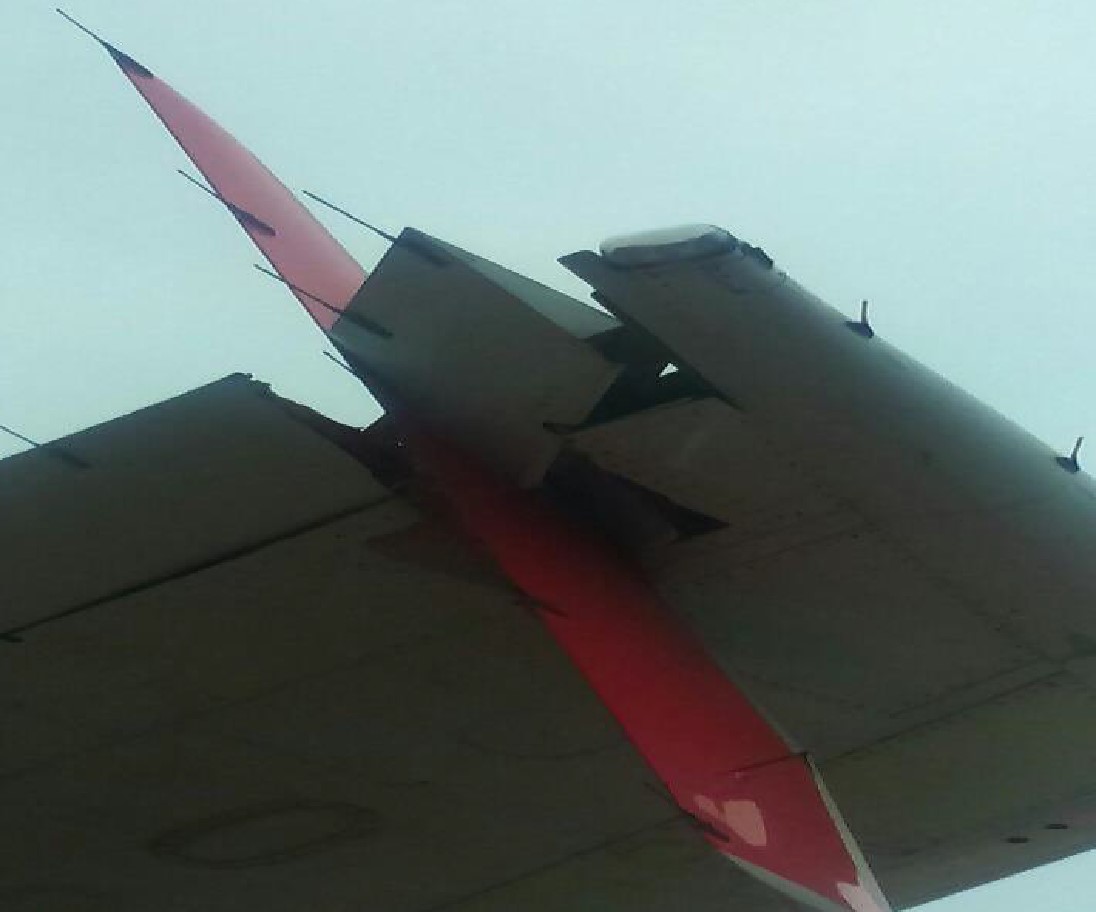 The 767 wing embedded in the A320 ‘sharklet’. [Reproduced from the Official Report]

It was found that, with the aircraft as parked, their wing tips would have been overlapping by 0.67 metres assuming that they were both on the centrelines of their allocated stands, whereas the prescribed minimum separation between the two aircraft was 7.5 metres (see the illustration below). 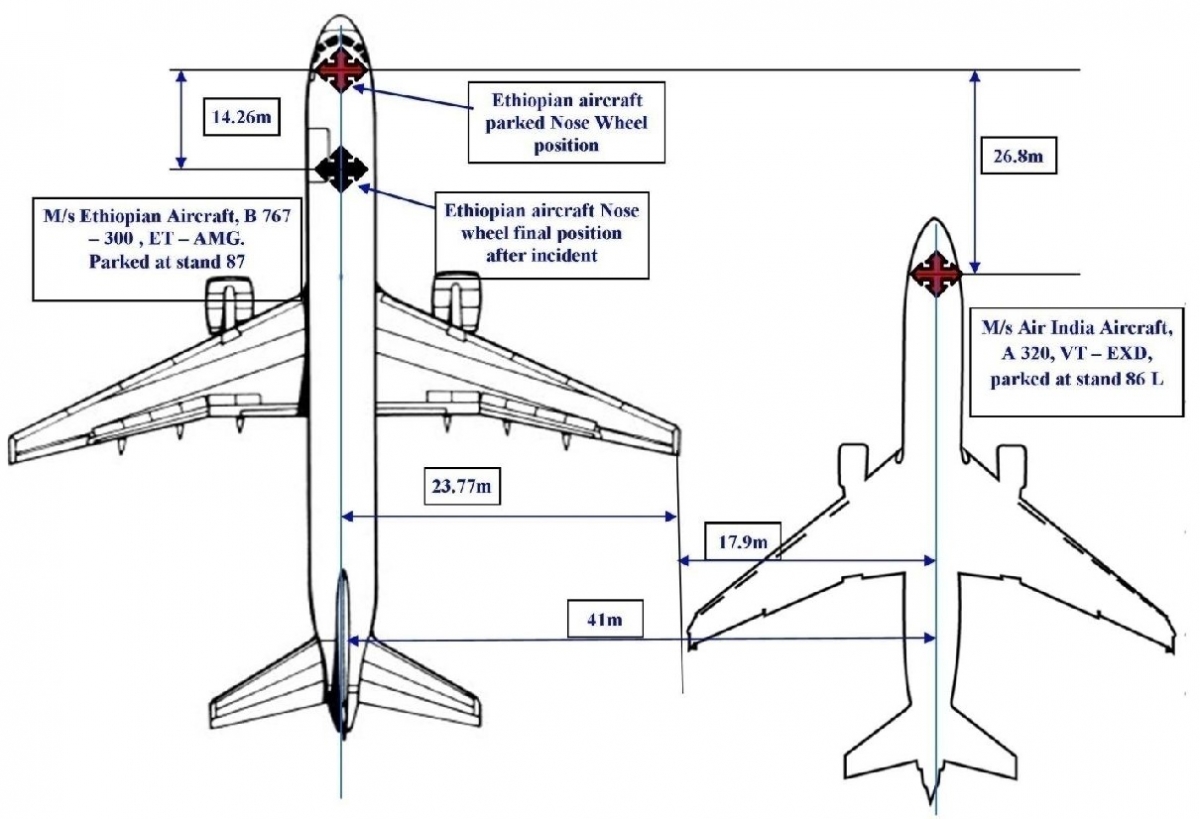 A not-to-scale diagram annotated with relevant distances. [Reproduced from the Official Report]

It was noted that airport procedures allowed the block of Code ’D’ (large) aircraft stands including 86 and 87 to be re-designated as pairs of Left (L) and Right (R) Code ‘C’ (small) aircraft stands on an ad hoc basis and that if this was done, the gate management system would create an alert in the event that a L or R stand was allocated when an adjacent stand had not been similarly split. This option was “not published” as it was not intended for regular use.

When the initial allocation of gate 86 to the inbound A320 was changed by a person unfamiliar with the allocation system to 86L shortly before its arrival on the instructions of the responsible allocator, the system did flag a conflict of “wing overlap” on screen but this was not noticed because all the stands in that area were already coloured ‘red’ after being temporarily ‘split’ under an ad hoc general designation. This earlier designation had already resulted in them being coloured red rather than the normal blue.

The Celebi Headset Operator who had been responsible for co-ordinating the pushback was found to have one month of experience in that role during which time he had performed “20-25 headset operations”. He stated that since he had seen the Ethiopian Airlines’ Engineer carry out an external aircraft inspection, he had “presumed that any anomaly would have been brought to his attention”. Only after he had started the pushback and the aircraft wings had collided had he “noticed that there was no wing walker”. A Celebi ‘Team Lead’ was present for the loading and departure of the 767 and he advised that at the appropriate time, he had instructed one loader to remove the NLG chocks and 4 others to remove the MLG chocks whilst he was standing near to the NLG in order to attach the tow bar to the push back tractor. He also claimed that he had subsequently instructed two loaders to act as wing walkers but that the pushback was started before they were in position, which directly contradicted the statement made by both these loaders who said that “They were not given directions for performing the wing walker function”.

It was noted that had wing walkers been in position prior to commencement of the pushback then the collision would have been avoided.

The Investigation determined that the Probable Cause of the Accident was “incorrect stand allocation made by aerodrome personnel without following Standard Operating procedures (SOP)”.

One Contributory Factor was also identified as “the non-availability of wing walkers during the pushback of the 767 aircraft”.

Four Safety Recommendations were made as follows: