On 12 October 2014, a Boeing 767-300 (ET-AMG) being operated by Ethiopian Airlines on a scheduled international passenger flight from Addis Ababa to Dar es Salaam as ET805 was approaching V1 for a normal visibility daylight take-off when the crew saw an obstruction ahead in the middle of the runway and immediately rejected the take-off, stopping about 100 metres before reaching a white vehicle. The aircraft taxied clear of the runway but then had to be towed in because of blown tyres due to the high energy rejected take-off.

An Investigation was carried out by the Ethiopian CAA Accident Investigation Bureau. It was noted that at the time of the conflict, aerodrome ATC was being provided by two controllers, one on GND frequency and one on the TWR frequency and that the 3,800 metre-long 45 metre wide principal runway 07R/25L was in use in the 07R direction. There was no ATC Supervisor present in the Tower as it was a Sunday and "supervisor coverage was not available during weekends". It was noted that whilst the TWR controller must give explicit permission for any vehicle or other access to the active runway, such an approval would normally be given by GND and there was no requirement for the person granted such access to communicate with the TWR or listen out on that frequency.

It was established that after a departing aircraft had reported "flocks of birds" on the parallel taxiway, the GND controller had decided that after an initial inspection of the taxiway where bird activity had been observed and reported, a bird scaring run of the full length of the runway was required. The GND controller, after reportedly obtaining the necessary permission of the TWR controller during an un-recorded direct exchange, issued the driver of the tasked vehicle with clearance to enter the runway at 23L threshold and proceed along its full length before exiting at the opposite (07R threshold) end. Less than a minute after this, the GND controller issued the 767, which was taxiing as previously instructed to the full-length holding point of runway 07R, with its departure clearance and instructed the crew to call TWR on reaching its taxi clearance limit at the holding point, which they did.

Without scanning the runway, the TWR controller issued take-off clearance to the 767 and following that, it was stated by the crew that after the First Officer had checked that the approach was clear prior to entry and the Captain had checked that the runway ahead was clear once lined up, the take-off was commenced. As the aircraft approached V1 (138 KIAS), the Captain detected an object ahead on the runway centreline and, after a take-off roll of about 1,750 metres to abeam the taxiway 'C' access to the runway (see the diagram below), immediately commenced a rejected take-off from a speed of approximately 135 KIAS. The aircraft was brought to stop abeam the taxiway 'D' access to the runway an estimated 100 metres from the object, which by then was identifiable as a white truck which had been driving towards them - the bird scaring vehicle. It was then taxied clear of the runway and stopped on the parallel taxiway to await a tow back to the gate because of 4 deflated tyres resulting from high brake temperatures caused by the high-energy rejected take off. 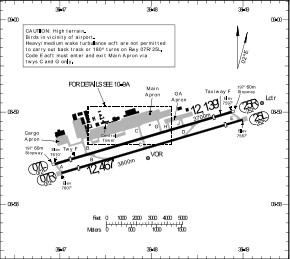 An extract from the aerodrome chart showing the position (abeam the 'C' intersection) from where the take-off was rejected and the stopping position abeam the 'D' intersection (Note that runway 07L/25R was, as is usual, in service as a parallel taxiway 'F')

Since both the bird scaring vehicle and the 767 were in possession of valid runway access and use clearances, albeit conflicting ones, the circumstances in which this had come about were examined. It was noted that:

The Investigation determined that the Probable Cause of the occurrence was "human error in that Tower controller inadvertently cleared ETH805 for take-off before he had cleared the airport service vehicle from runway and he didn’t check the runway before he issued the take-off clearance".

Five Safety Recommendations were made:

The Final Report was published in the English language at an unknown date following the completion of the Investigation.