On 19 October 2009, a Boeing 767-300 being operated by Delta Airlines on a scheduled passenger flight from Rio de Janeiro to Atlanta inadvertently made a landing at destination in night VMC on parallel taxiway M instead of the intended and ATC-cleared landing runway 27R. None of the 194 occupants were injured and there was no damage to the aircraft or conflict with other traffic or vehicles. The third rostered crew member had become incapacitated en route with the consequence that neither of the other pilots had been able to take any in flight rest.

On 19 October 2009, a BOEING 767-300ER being operated by Delta Airlines on a scheduled passenger flight from Rio de Janeiro to Atlanta inadvertently made a landing at destination in night Visual Meteorological Conditions (VMC) on parallel taxiway ‘M’ instead of the intended and ATC-cleared landing runway 27R. None of the 194 occupants were injured and there was no damage to the aircraft or conflict with other traffic or vehicles. The third rostered crew member had become incapacitated en route with the consequence that neither of the other pilots had been able to take any in flight rest.

An investigation was carried out by the National Transportation Safety Board (USA) (NTSB). Flight Data Recorder (FDR) and 2 hour Cockpit Voice Recorder (CVR) data were available to the Investigation.

It was established that three flight crew had been on board with the third being a Check Captain overseeing the operating Captain for the purposes of his obtaining a special airport qualification. It is not clear from the report whether a third pilot was automatically required or customarily rostered to fulfil crew duty requirements but it is clear that this was the intention on this flight. Normal practice is reported to have been to divide the estimated time in the cruise into three equal parts and rest accordingly. The flight was expected to take around 10 hours and in the event landed around 10 hours and 10 minutes after the off gate time.

Departure from Rio had been made with the Operating Captain in the left hand seat, the Check Captain in the right hand seat and the First Officer in the Observers seat. At top of climb, the Check Captain took the first of the three 2 hour 50 minute rest periods but was determined to be ill at the end of it an remained off the flight deck for the remainder of the flight. The other two pilots, with the Captain who had been in the left hand seat for departure as the designated aircraft commander and PF for the arrival, conducted the entire flight without the benefit of their usual in flight rest periods. Throughout the flight both made comments indicating that they were fatigued and identified fatigue as their highest threat for the approach, but did not discuss strategies to mitigate the consequences of that fatigue.

During the descent and approach, the flight was given a number of runway changes, the last of which was in the vicinity of the FAF for runway 27L when an ATC offer of a visual sidestep to runway 27R was accepted. Although the earlier approach brief had covered two possible runways, these did not include 27R and they were not aware that the approach lighting and ILS were inoperative. The 27R PAPI was identified and the aircraft was lined up on what the PF said had been “the brightest set of lights he could see”. As the aircraft proceeded on finals, the First Officer became preoccupied with an attempt to tune and identify the 27R ILS. Four seconds prior to touchdown, the CVR tape includes the PF expressing his realisation that they were about to land on a taxiway. That taxiway was taxiway ‘M’ which was parallel to runway 27R and 61 metres north of it. 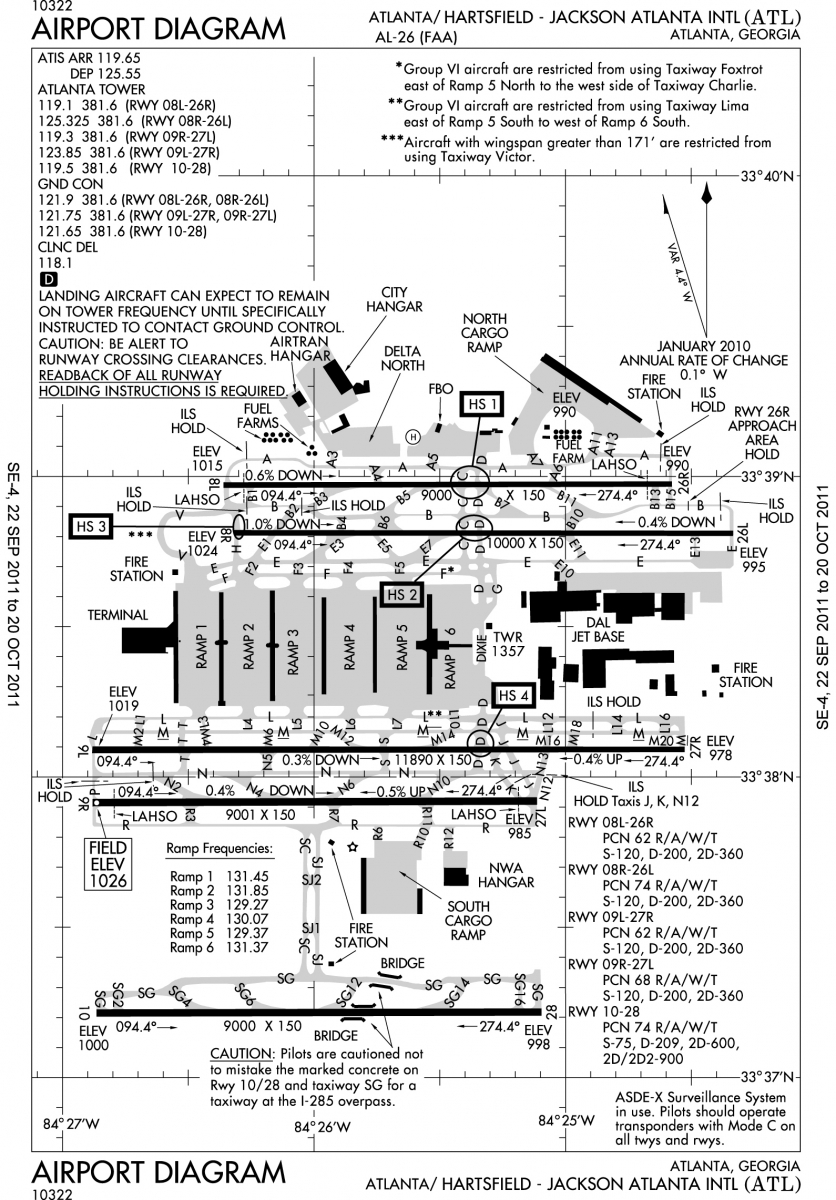 KATL Airport Diagram - to be used for description purposes only.

All five runways at Atlanta were oriented approximately east-west and 27R was 3625 metres long and 45 metres wide. Taxiway ‘M’ was only 50% the width of the runway and was equipped with standard blue edge lights and standard green centreline lights.

It was noted that the installed Airport Surface Detection Equipment, Model X (ASDE-X) was not programmed to activate alerts for an aircraft landing or departing from a taxiway and, therefore, when the local controller scanned the ASDE-X display, system safety logic bars indicated that the approaching aircraft was correctly aligned with runway 27R. It was also noted that the installed airport lighting system did not provide ATC personnel with the capability to individually control each of the lighting circuits in accordance with guidance contained in the specifically applicable FAA AC 150/5345-56.

Flight evaluations of the airport lighting system carried out as part of the Investigation indicated that there were a number of visual cues that could have been misleading. These included a plethora of taxiways signs along both sides of taxiway M which appeared to be white when seen from the air at night and could thus be mistaken for runway edge lights. In addition, the blue LED lights used on the ‘touchdown’ end of taxiway ‘M’ could appear brighter than the adjacent incandescent lights on the aerodrome and the alternating green and yellow lights in the ILS critical area were considered capable of giving the appearance of a runway centreline. However, the same flight evaluations also indicated that when either the approach lights or ILS for runway 27R were available and used, it was quite obvious when the aircraft was not aligned with the required runway. It was also found that “the color of the blue taxiway edge lights became distinguishable at about 500 feet above ground level while on approach”.

The full NTSB Final Report of the Investigation: OPS10IA001 includes the following Probable Cause, determined by NTSB on 15 November 2010 as:

“The flight crew’s failure to identify the correct landing surface due to fatigue”.

It was also concluded that Contributory Factors were:

No Safety Recommendations were made as a result of the event.