On 4 March 2019, a Boeing 767-300 crew lost directional control of their aircraft as speed reduced following their touchdown at Halifax and were unable to prevent it being rotated 180° on the icy surface before coming to a stop facing the runway landing threshold. The Investigation found that the management of the runway safety risk by the airport authority had been systemically inadequate and that the communication of what was known by ATC about the runway surface condition had been incomplete. A number of subsequent corrective actions taken by the airport authority were noted.

On 4 March 2019, the crew of a Boeing 767-300 (C-FTCA) being operated by Air Canada on a scheduled domestic passenger flight from Toronto International to Halifax International as AC614 were unable to maintain directional control of their aircraft as it slowed after a night touchdown in normal ground visibility and were unable to stop it performing a slow 180° rotation during which the nose gear departed the runway paved surface before the aircraft came to a stop facing the runway landing threshold with all the landing gear on the runway. There were no injuries and inspection of the aircraft showed it was undamaged.

An Investigation was carried out by the Transportation Safety Board of Canada (TSB) focusing primarily on the procedures associated with ensuring that active runways at Halifax were fit for use during adverse weather conditions and that the communications in that respect with aircraft landing there were also adequate. The performance of the flight crew of the aircraft involved was not examined.

On reaching the destination vicinity, the weather was below the applicable approach minima for the runway in use so the aircraft entered a holding pattern to await the forecast improvement. After a little over half an hour, the expected improvement had occurred and radar vectors for an approach to runway 32 were given. Following a frequency change from Moncton Centre to the Halifax Terminal, the crew were advised of a just-issued SPECI which gave the prevailing visibility as (equivalent to) 1600 metres in light freezing drizzle and mist with the vertical visibility 200 feet agl and temperature and dew point both -1 °C. The controller also gave the current surface wind velocity as 350° at 20 gusting 30 knots and offered the option of a landing on Runway 23 which had just become available after snow clearance and was longer (2682 metres) than runway 32 (2347 metres) and for which a Cat 2 ILS approach was available. Despite given surface wind representing a crosswind component of between 17 and 26 knots and a tailwind component of 10-15 knots, the crew decided to take this option and the controller then passed them the most recent Runway Surface Condition (RSC) report for the runway to both the 767 crew and the crew of an Embraer aircraft (type not specified) that was number 1 for a 23 approach. This gave almost the full 61 metres width as 20% compacted snow, 80% bare and wet and the edges as 70% wet snow to a maximum height of 25mm and 30% bare and wet. It was noted that “based on this RSC, a Canadian Runway Friction Index was not provided, nor was one required”.

The Embraer aircraft landed four minutes later and its crew then advised the Halifax TWR controller that “we had the field at 300 feet, braking action was very poor, actually” and subsequently after being transferred to GND advised that the runway was “very, very icy, it’s basically a skating rink“. The TWR controller relayed the comments received from the Embraer crew after landing on runway 32 to a DHC-8 which was on approach to Runway 32 as “lights in sight at 300 feet and braking action poor on Runway 23” and then called the Halifax Terminal controller and said that the pilot of the Embraer aircraft had said that “the runway is a skating rink” and that “he barely got stopped by the end of the runway”. The Terminal controller then called the 767 crew and passed on the information provided by the Embraer crew as runway in sight at 300 feet but “the 23 rollout had been very slippery, he barely got stopped towards the end of it”.

Shortly after this, the 767 was transferred to TWR and after they had checked in, the controller asked the crew of the DHC-8 which had just landed on runway 32 for comments and the response included that “braking was good for them but they could see how it was slippery”.

The 767 was then cleared to land on Runway 23 and given a spot wind of 350° at 24 - 31 knots, with instructions to exit the runway at its end. The aircraft subsequently touched down “within the first third of the runway at an airspeed of about 140 knots” and the crew initially used full reverse and auto-braking having understood from ATC “that it was the end portion of the runway that was slippery”. However, as the speed decreased and reverse thrust was reduced, braking action became nil and as it reached about 15 knots, the aircraft began to slide. As it began to ‘weathervane’ due to the effect of the crosswind component, the Captain reported that in the absence of any steering authority, he had attempted to use asymmetric reverse thrust to correct this but the crosswind had “pushed the aircraft sideways, causing the nose wheel to roll into the snow off the right edge of the runway”. This led to the remaining forward motion of the aircraft to be translated into a slow clockwise rotation as the man gear lost traction on the icy runway and it eventually came to a stop facing in the opposite direction to landing with all the landing gear still on the runway paved surface. The aircraft was subsequently found to be undamaged and there were no occupant injuries. The passengers were disembarked to buses and taken to the terminal. 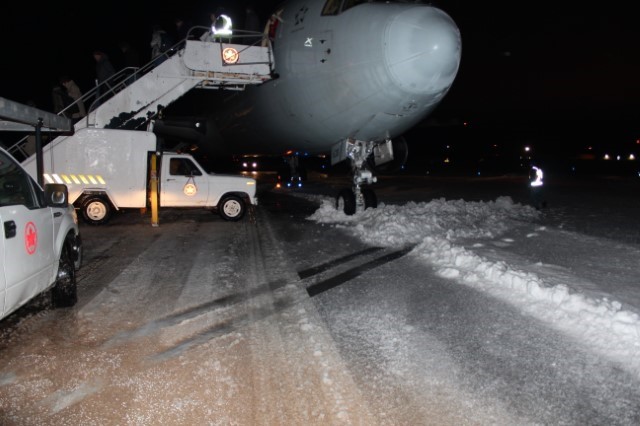 An aerial view showing the landing direction and (inset) the position of the stopped aircraft. [Reproduced from the Official Report]

Meanwhile, three minutes after the 767 event had led to the closure of runway 23, an Airbus 320 successfully completed a landing on Runway 32, but was unable to taxi off it until sand and chemicals had been applied because of ice covering the surfaces of both the runway and the exit taxiway. Runway 32 was subsequently reopened almost two hours later. After release by the TSB (at an unspecified time), the 767 aircraft was subsequently towed off the runway and runway 23 was also reopened. 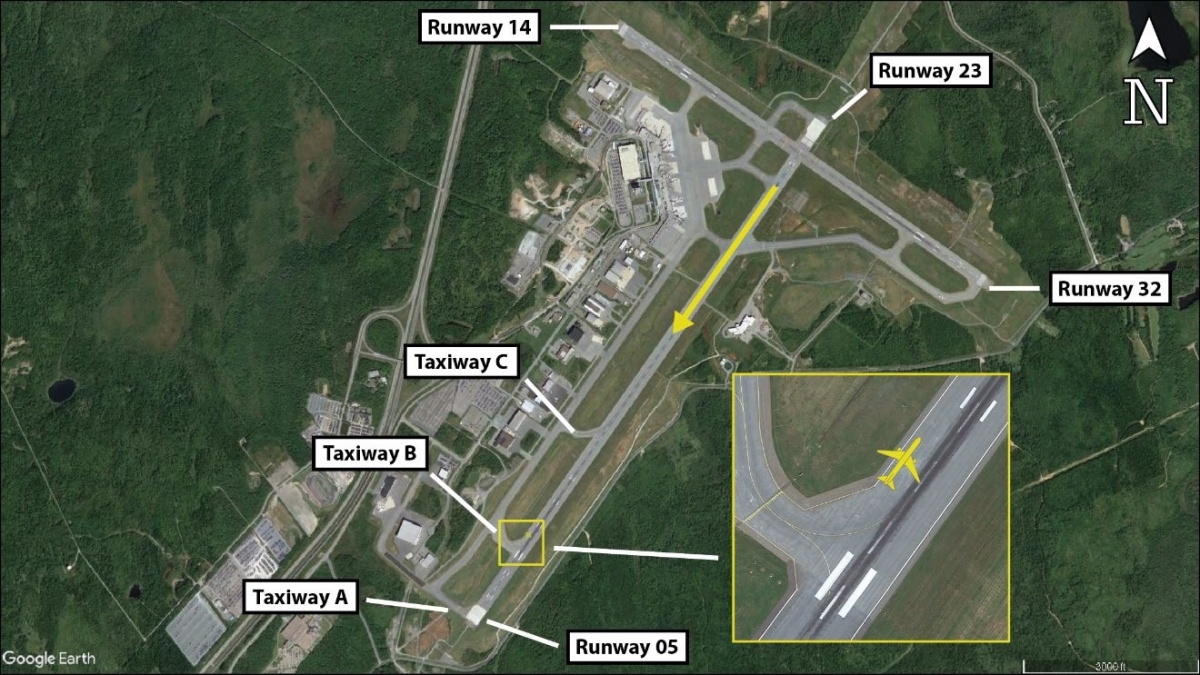 The aircraft after coming to a stop. [Reproduced from the Official Report]

Four aspects of the prevailing conditions and the airport’s response to them were reviewed:

It was noted that the TAF for Halifax current at the time of the investigated event was valid for 24 hours from 4½ hours prior to the event. For the period around the occurrence time, it gave the surface wind as 360°/15 knots, visibility (equivalent to) 2400 metres in light drizzle and mist and cloud overcast at 400 feet with a TEMPO (temporary) of visibility (equivalent to) 4,800 metres in light rain and mist with cloud overcast at 800 feet.

However, the actual weather was not as good as had been forecast. The METAR issued half an hour prior to the event gave the wind as 320°/19 knots, visibility (equivalent to ) 400 metres and a RVR for runway 23 (equivalent to) 1067 metres in light drizzle and fog with a vertical visibility of just 100 feet. The SPECI issued nine minutes later then gave the wind as 320° 24-29 knots, the visibility (equivalent to) 2,000 metres and a runway 23 RVR in the range (equivalent to) 900 -1,800 metres in light freezing drizzle and mist with the cloud overcast at 200 feet. Just before the 767 touched down, another SPECI gave the wind as 330° 24-31knots, visibility 3,200 metres with the overcast now at 400 feet agl. This second SPECI also recorded a drop in the surface temperature and dew point from the earlier -1°C to -2°C and a third SPECI five minutes later recorded a further drop of both to -3°C.

The standard phraseology for the communication of runway braking action was noted as being ‘good’, ‘medium’ or ‘poor’ whereas after their landing on runway 32, the Embraer crew advised ATC of “very poor” braking action and further stressed this in plain language. It was noted that although NAV Canada permits its controllers to use plain language to relay information, the sense of the message must not be altered and in this case, subsequent relays to the 767 crew had not mentioned that “very” poor braking action had been reported or included any reference to the “skating rink" analogy used by the reporting crew.

It was noted that the responsibilities of the airfield maintenance crew on shift at Halifax included the removal of frozen deposits from runways as required and these crews are managed by an Airfield Maintenance Supervisor (AMS). Shift change time was scheduled for the same time as the 767 landed. It was found that “approaching the end of each shift, there is a period of time when the departing crew is preparing the equipment for use by the next crew (during which) the airfield may be unattended for up to 30 minutes”.

On the day of the investigated event, snow in the morning had changed to freezing rain and then rain in the afternoon and since the temperature was expected to drop below freezing in the evening, a second airfield maintenance crew was called in to assist. By early afternoon, the two crews had cleared most of the width of runway 32 to “70% bare and damp” and had begun removing snow from Runway 23 in anticipation that the forecast weather for later in the day would favour it for landing. An hour prior to the 767 landing, the duty AMS issued an RSC report which included that there were windrows of snow on either edge of runway 23 and was told by the Airport Duty Manager (ADM) that these would have to be removed before the runway could be reopened to aircraft. This was achieved after a further half hour and was communicated in another RSC report at 1808, removing the windrows comment and increasing the available width of the 61 metre-wide runway by 6 metres to 48 metres and it was then re-opened. At about this time, airfield maintenance crew day shift “was returning to the maintenance building to prepare the vehicles for the night shift”.

The Runway Weather Information System in use at the time of the investigated event consisted of 6 sensors, 3 embedded in the centreline of each runway which detected atmospheric conditions and relayed them in real time to computer screens in the offices of the AMS and the ADM and made them accessible on the AMS’s PED as long as it was refreshed manually to ensure that the most current conditions were shown.

A little under half an hour before the time of the airfield maintenance crew shift change (and the 767 landing), the runway weather information system’s status changed from ‘wet’, which indicates the presence of a continuous film of moisture on the surface of the sensor with temperature above 0°, to ‘ice warning’ which indicates that there is a continuous film of ice and water mixture at or below 0°C with insufficient chemical present to keep the mixture from freezing.

During this time, it was found that “the ADM had not been available to monitor the conditions” and that “the AMS was returning from the airfield, issuing his revised RSC and preparing for shift change”. As a result, this important change in system status “went unnoticed”.

Three Safety Messages were formally documented upon completion of the Investigation as follows:

Safety Action taken as a result of the occurrence by the Halifax International Airport Authority was noted as having included the following:

The Final Report of the Investigation was authorised for release on 2 October 2019 and it was officially released on 9 October 2019. No Safety Recommendations were made.