On 3 November 2020, a Boeing 767-300 departing Madrid had an explosive main gear tyre deflation just after passing V1 and tyre debris ingested by the adjacent engine led to its failure. After completing the take off on one engine and burning off excess fuel, the aircraft landed back four hours later without further event. The Investigation found that the cause of the deflation was a piece of unidentified debris of a size unlikely to be detected by normal visual runway inspection methods. It also found that there was scope for improvement in related airport and ATC emergency response procedures.

On 3 November 2020, a Boeing 767-300 (C-GHOZ) being operated by Air Canada on a scheduled international passenger flight from Madrid Barajas to Toronto as ACA837was just about to rotate when one of the left main gear tyres failed and debris was ingested into the left engine resulting in its failure. The takeoff was completed in day VMC whilst the failed engine was shut down and a MAYDAY declared. After just over four hours airborne to the southeast of the airport at up to 8000 feet in order to burn off excess fuel, the aircraft landed back at Barajas but awaiting sufficient brake temperature reduction to proceed to a gate then delayed passenger disembarkation by over an hour. None of the 138 occupants were injured.

The Spanish Commission for the Investigation of Accidents and Incidents (CIAIAC) carried out an Investigation. Relevant data was downloaded from both the FDR and CVR and combined with recorded ATC data.

After uneventful flight preparations and taxi out to runway to runway 36L, a flap 5 takeoff commenced and was normal until three seconds after passing V1 (158 KIAS) which was one second after VR (160 KIAS) and at a ground speed of 176 knots. Footage from the airport surveillance cameras showed that a tyre on the left rear wheel of the left main landing gear (tyre number 5) had exploded resulting in the adjacent engine ingesting several shredded tyre tread fragments. A flame was immediately evident from the engine and as rotation then began, a second flame from the engine was seen (see the illustration below).

Passing V1+5, rotation begins with a second flame from the left engine  after tyre debris had been ingested. [Reproduced from the Official Report]

The takeoff was continued and once safely airborne at 171 KIAS (V2 being 166 KIAS), the crew began the shutdown of the malfunctioning left engine by first disconnecting the A/T. A MAYDAY call for engine failure was made and shortly after this, the engine shutdown was completed.

The aircraft remained on runway heading until it climbed above the prescribed acceleration altitude of 2,850 feet QNH and then, having levelled off at 3,000 feet QFE (1,000 feet agl) turned southeast towards the NVS VOR as per their company single engine emergency procedure (see the first illustration below) which was designed to ensure that high terrain on the SID track being followed was avoided by requiring a straight ahead climb out to 5nm followed by a left turn to track to the NVS VOR (see the second illustration below). The crew advised ATC that they were flying on one engine and were unable to retract the landing gear or climb any further and ATC responded by instructing the flight to turn south onto a radar heading of 160° which then took them directly over the Madrid city centre (see the track on the second illustration below). 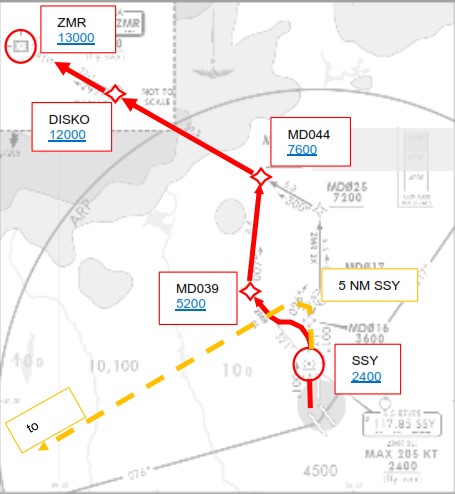 The company prescribed ‘engine failure on take-off’ procedure (broken orange line  and the SID (a solid red line towards high ground). [Reproduced from the Official Report]

On this track, nine minutes after takeoff, the crew managed to retract the landing gear using the QRH procedure “Gear Lever will not move up” which overrides the gear lock which the tilt sensor damaged by tyre debris impact had not allowed. Retraction of the flaps then followed and it became possible to increase the speed to 230 KIAS. 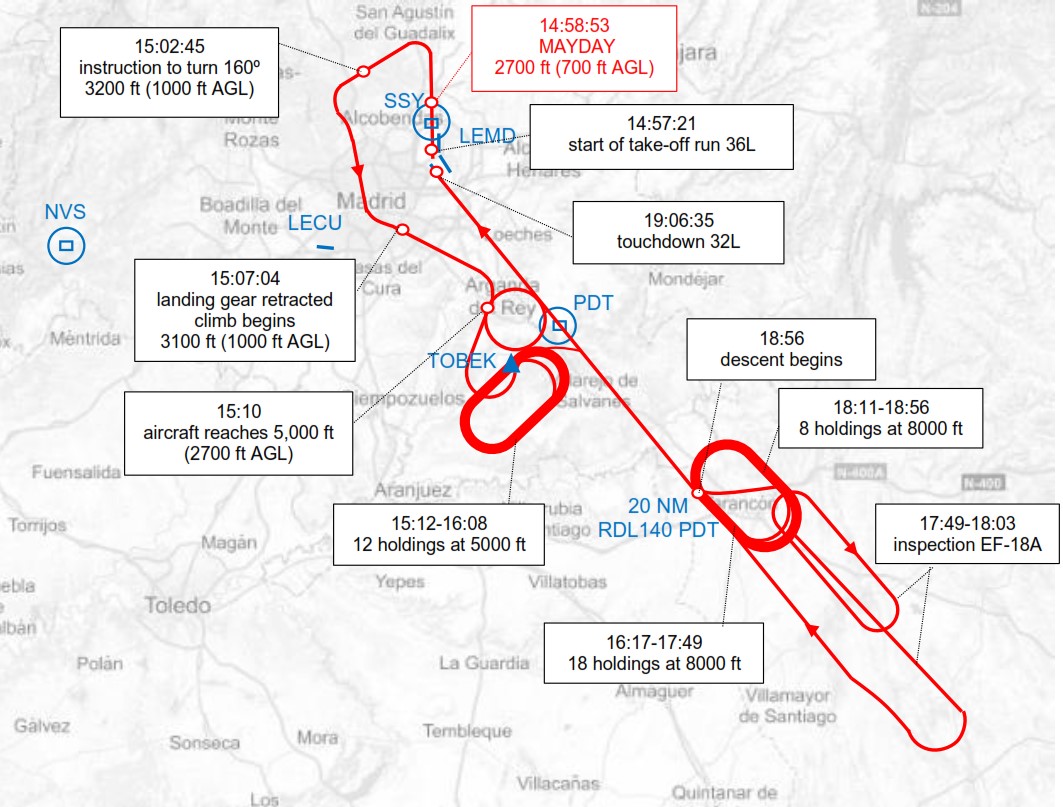 The track followed from takeoff on runway 35L to landing on runway 32L. [Reproduced from the Official Report]

Twelve minutes after getting airborne, the aircraft reached 5,000 feet QNH and was instructed to head towards TOBEK, where it then flew 12 extended holding patterns over the next hour. The crew then advised that they would need 3 more hours airborne to get down to an acceptable landing weight (the aircraft had no fuel jettison facility) and would now be able to climb further and continue holding as required at any navigation point. Accordingly, the aircraft then flew to d20 on 140° radial from the PDT VOR (36 nm from the airport) and flew 18 further extended holding patterns at an altitude of 8,000 feet for 90 minutes.

The aircraft then positioned so that the flaps and landing gear could be extended for inspection by a Spanish Air Force aircraft to confirm the extent and location of any visible damage after which both were retracted again and the aircraft returned to the PDT-based hold and completed a further 8 extended holding patterns. The aircraft then began an uneventful approach to runway 32L from 8,000 feet QNH and made a 20 flap landing ten minutes later. Once it had come to a stop on the runway, airport RFFS began cooling the brakes with fans. This was necessary for almost an hour after which the aircraft was able to taxi under its own power to its allocated parking stand where normal passenger disembarkation followed.

The aircraft was confirmed to have sustained significant damage to the left main landing gear (specifically to the outer rear wheel of the four-wheel two-axle bogie) and the left engine (both internally and to its external fairings) with superficial impact damage to the fairing of flap number 3, to various panels located above the left main gear and to the landing gear tilt proximity sensor which had been moved outside its normal limits by debris impact. The failed tyre (see below) was confirmed to have been correctly inflated to 220 psi and fully serviceable prior to departure. It was still attached to the landing gear but about 60% of its total surface material (casing and tread) had disappeared entirely, with the bead visible in some places. The casing of the remaining 40% was intact but the tread had disappeared.

It was noted that after a routine inspection of runway 36L had been completed shortly before the 767 took off, there had been three uneventful departures of narrow body aircraft from the runway, all with longer takeoff rolls than the 767 (to be expected since they could be expected to have used reduced thrust rather than the full thrust used by the 767). A runway inspection after the takeoff then found “multiple pieces of wheel and debris” scattered over approximately 1,400 metres of the runway used by the 767 for departure which was then removed by a sweeper. The observed FOD included “wheel fragments of different sizes, the smallest measuring a few centimetres in thickness and length and the largest being over a metre in length” as well as honeycomb material which was subsequently identified as part of the left engine inlet cowling. Detached tyre fragments were also subsequently recovered from the interior of the left engine and an inspection of runway 32L after the 767 landed also found several pieces of tyre debris.

A comprehensive examination of the recovered tyre fragments confirmed, with certainty, that the No 5 wheel tyre failed as a result of being punctured by a sharp object, which penetrated from the outside in and managed to pierce through the tread and almost the whole of the tyre casing. It was demonstrated that “at the moment it punctured the tyre, the object was at an inclined angle (and) was approximately 1½ mm wide and 7cm long”.

It was noted that the fact that the FOD involved had affected one of the rear rather than one of the front wheels of a two axle bogie was not unusual with the most feasible explanation for this being that the item involved is initially lying flat on the runway but is then lifted by the wheel on the front axle of the bogie which is   immediately ahead and projected backwards resulting in an inclination from the horizontal sufficient to result in penetration of the wheel immediately behind.

The Investigation was not able to establish whether the causal FOD was on the runway and had gone undetected during the routine runway inspection conducted shortly before the takeoff or whether it had originated from one of the three aircraft which had taken off after it but before the 767 and it was considered that either was “equally possible”.

All aspects of the crew’s handling of the emergency were considered exemplary.

The limitations of routine visual runway inspections as carried out at the airport in detecting small items of FOD were acknowledged, given that they are “visual and performed by one person from a moving car that can travel up to 60kph/37mph and covers areas up to 30 metres wide”. It was considered that whilst this does not completely prevent the detection of smaller objects which are sometimes detected, “the general conclusion is that visual inspection methods are not entirely effective because of the limited human capacity to spot them”. Having said that, it was recognised that whilst the most common type of hazardous FOD is small metallic objects with dimensions similar to the one that caused the investigated event it appeared to be generally accepted that “hazardous FOD only accounts for a small percentage of all FOD found on runways and that in 80% of cases it does not affect aircraft operations”. It was considered that this was why visual inspection is still the primary method used at most airports, including Madrid.

The Investigation adopted a position on various aspects of the Airport and ATC emergency response to the event including the following:

The Cause of the Serious Incident was determined as “the presence of a sharp foreign object (FOD) on runway 36L which punctured the aircraft’s number 5 tyre on the left main landing gear and resulted in an explosion of the tyre and other secondary failures including the left engine".

The Final Report of the Investigation was approved on 30 June 2021 and then released online simultaneously in both the definitive Spanish version and in English translation on 10 December 2021.