On 3 August 2006, a Qantas Boeing 767-300 encountered a large flock of birds during rotation and sustained multiple strikes on many parts of the aircraft. Left engine vibration immediately increased but as reducing thrust also reduced the vibration, it was decided following consultation with maintenance to continue to the planned destination, Sydney.

On 3 August 2006, a Boeing 767-300 being operated by Qantas on a scheduled domestic passenger flight from Melbourne to Sydney encountered a large flock of birds during rotation for a dusk but still daylight normal visibility take off and sustained multiple bird strikes. Abnormal function of the left engine followed and was attributed to bird ingestion but the situation was sufficiently contained for the crew to decide to continue to Sydney rather than turn back and the remainder of the flight was, given some precautionary engine handling decisions, uneventful.

An Investigation was carried out by the Australian Transport Safety Bureau (ATSB). It was established that the birds had numbered between 20 and 50 and had all been a small species of cockatoo called a Corella. It was considered by the airport operator and by wildlife experts consulted that, as these birds had not been feeding within the aerodrome boundary and the species was not usually locally evident, they had probably arrived in search of food because of a drought which was known to be prevailing in their normally resident area.

It was found that after immediately after the bird encounter, the left hand engine vibration indication had risen to 4.5 units and been accompanied by a change in the sound of the engine and a slight vibration through the airframe. However, the corresponding EGT value for this engine had not changed from the pre-strike value and there had been no changes to any of the engine indications for the right hand engine.

In the absence of clear operational guidance as to acceptable vibration limits for continued flight, Company maintenance were contacted and advised that provided vibration could be kept below 2.0 “they were not concerned”. A reduction in climb thrust by about 10% produced a vibration reading of about 1.3 units. The approximately one hour flight was uneventful thereafter and was as a precaution conducted at a lower than normal cruise altitude of 29,000 feet so as to remain below the AFM single engine operating ceiling. For the descent to destination, the crew operated the left engine to flight idle as a further precaution and conducted an uneventful asymmetric thrust approach and landing.

It was noted that the context for this crew response had been that following a bird strike “the procedures to be carried out by flight crews were based upon the indications of any damage noted on the aircraft’s instrumentation and warning systems, and good airmanship”.

In respect of resilience of the engine as installed to the circumstances encountered, it was noted that bird ingestion should “not cause more than a sustained 25 percent power or thrust loss or require the engine to be shut down”. However, subsequent enhancements to the requirement, which were not applicable to the incident aircraft engines, were noted to have added a specified minimum ‘run-on’ period of 5 minutes after bird ingestion damage on the basis that this time period was “representative of the time required for an aircraft to return for landing following bird ingestion during takeoff or climbout”.

A subsequent examination of the aircraft by maintenance showed that the birds had struck the nose of the fuselage, the nose and right main landing gear, the wing leading edges, the engine pylons and both left and right engines. The damage to the aircraft was determined to have been minor, except for damage to the leading edges of 4 to 5 blades on both engines and blockage of the pre-cooler on the left engine. The extent of leading edge fan blade damage - see the picture of that to the right hand engine below - was found to have been similar for both engines. 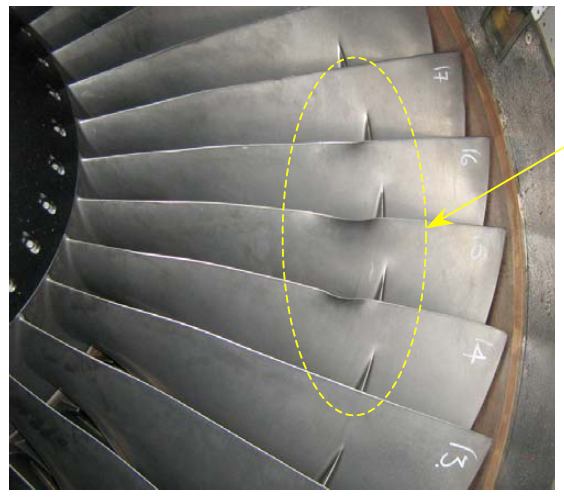 The Investigation identified two issues in respect of the decision to continue with the flight to Sydney, firstly the “durability” of the affected (left hand) engine and secondly “the unknown performance of the aircraft if the right engine had failed during the remainder of the flight”. It was noted that the decision to continue the flight was based on a tacit assumption that the only development en route was likely to be a further deterioration in the thrust available from the left hand engine. However, since subsequent examination of the right hand engine had found that it had also sustained damage due to the bird strike, there was, albeit unknown to the crew, a theoretically increased risk of failure of that engine during the continued flight.

It was recognised that the tactical decision in respect of the continued safe operation of the aircraft was based upon a limited amount of information and had been made in a limited amount of time. It could be seen to have been made without a full appreciation of the extent of potentially significant damage and therefore also of the potential risks to the safe completion of the flight. It was considered that had Qantas provided appropriate operational guidance, the crew would probably have returned the aircraft to Melbourne.

In respect of the failure of airport bird watch strategies to detect the flock of birds involved and warn ATC accordingly, the Investigation noted that monitoring was not continuous and that the solution to better risk management probably lay in the real-time bird detection technologies currently being developed.

Safety Action taken by Qantas by introducing a new flight operations policy for all twin engine aircraft types was noted as follows:

“Any time a bird strike to an engine (or engines) is known to have occurred AND there is obvious sign of engine damage, then a landing at the nearest suitable Airport should be accomplished. It noted that obvious signs of engine damage may include: increased vibration (either indicated or felt), a change in engine parameters that is not normal for the phase of flight, or significant difference in the parameters between engines.”

The 'Final Report Aviation Occurrence – 200605807 of the Investigation was released on 29 June 2007. No Safety Recommendations were made