On 4 November 2013, smoke began to appear in the passenger cabin of a Boeing 767 which had just begun disembarking its 243 passengers via an airbridge after arriving at Montreal. The source was found to be a belt loader in position at the rear of the aircraft which had caught fire. Emergency evacuation using the airbridge only was ordered by the aircraft commander but cabin conditions led to other exits being used too. The fire was caused by a fuel leak and absence of an emergency stop button had prevented it being extinguished until the airport fire service arrived.

On 4 November 2013, a Boeing 767-300 (CN-RNT) being operated by Royal Air Maroc on a scheduled passenger flight (RAM 206) from Casablanca to Montreal had just begun disembarking its 243 passengers after arriving at Montreal in daylight when a burning smell became evident in the passenger cabin. After the crew had established that the origin of the smoke was a fire in ground equipment close to the aircraft, an emergency evacuation was ordered. Seven passengers sustained minor injuries or were overcome by smoke of whom five were taken to hospital. Subsequent inspection of the aircraft found that it was undamaged.

An Investigation was carried out by the Canadian Transportation Safety Board. It was established that the aircraft arrived at Gate 61, the engines were shut down, the APU remained running and passengers began leaving the aircraft using the airbridge which had been attached to door 1L.

A belt loader was positioned at the aircraft aft left cargo door (which was close to cabin door 4L) and the driver raised the ramp to sill level before applying the handbrake and stepping down from the driver's seat. At this point, he noticed a fuel leak from the loader engine compartment. He informed a colleague who, after inspecting the situation, called a supervisor. The driver then climbed back into his seat and lowered the ramp so that the loader could be moved away from the aircraft, but the fuel that had accumulated on the ground underneath the loader then ignited and the driver left his seat so as to avoid the flames.

Shortly afterwards, a burning smell became apparent in the aircraft cabin and a member of the ground staff began banging on the outside access door of the airbridge to warn the cabin crew of the fire. The senior member of cabin crew then went onto the boarding bridge from where they could see the fire. He immediately informed the Captain, who having verified the situation for himself, made a PA ordering an evacuation using door 1L which was already being used for normal disembarkation but leaving all baggage behind.

Since the aft cargo door was already open, "thick and acrid" black smoke from the fire had entered the underfloor hold and spread into the passenger cabin above via the air recirculation fans which had an air intake between the cargo compartment liner and the outer skin of the fuselage. When smoke began entering the cabin, there were still over 100 passengers in the middle section of the cabin and around 90 more in the rear section. The prevailing wind was very light but its direction was such as to drift the smoke directly towards the aircraft. It was suspected that some smoke also entered the cabin after being taken in through the air intake of the APU which was providing cabin air conditoning.

Passengers became "agitated" when they saw that their access to the only exit in use was delayed and some "began pushing and shoving" which led to some falling down in the aisles and others stepping over them. Some passengers took their baggage with them despite the instruction given which further hampered the evacuation. Some passengers opened doors 3L and 3R and since the slides at these exits are always armed, were able to leave the aircraft using the automatically deployed evacuation slides. Soon after this, passengers at the rear of the cabin began insisting that the cabin crew open doors 4L and 4R, the slides for which had been routinely disarmed on arrival. The crew blocked access to door 4L due to its proximity to the fire but given "the clear and present danger" decided to arm and open door 4R. It was estimated that between 100 and 150 passengers evacuated via the exit slides at doors 3L, 3R and 4R.

Some passengers who used the exit slides found themselves on the apron without anybody to help them and "wandered around looking for instructions and direction". The Investigation concluded that "ground crew working around the aircraft at the time of the evacuation had clearly not been trained on how to deal with such an influx of passengers from the evacuation slides" but noted that there was nevertheless some spontaneous response.

Whilst the evacuation was in progress, attempts to put out the fire were made by ground crew using a wheeled dry chemical fire extinguisher brought from under the boarding bridge but after exhausting its contents in 70 seconds, the fire was still burning. A second wheeled extinguisher failed to work due to a kink in the application hose which was unseen at the time and the flames spread to the loader's rubber belt. Fire Service vehicles were then seen to be approaching and the area was cleared so as not to interfere with their intervention. Having reached the fire the fire crew applied fire suppressant foam and the fire was fully extinguished in 43 seconds. 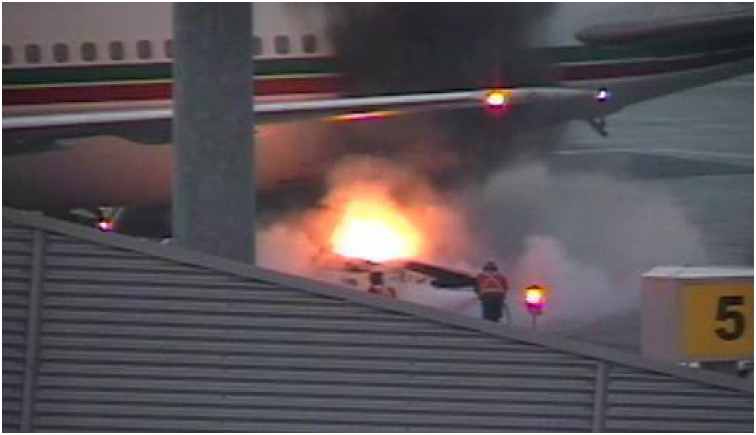 The Investigation noted that Servisair, the operator of the belt loader involved was an airport-based contractor to the aircraft operator. It was found that the provision of such contractor services is not subject to direct regulation by Transport Canada (TC) and that their oversight is the responsibility of the airport operator, Aéroports de Montréal (ADM) which has an SMS which is approved by TC. Under this arrangement, ADM is required to ensure that all its service providers "conduct their activities in a manner that complies with ADM's quality assurance program". However, it was found that at the time of the incident, although ADM had implemented an SMS which had been approved by TC, no post-implementation assessment of it had been carried out by TC. In any case, it was also found that Servisair, along with a number of other airport service providers "had not yet been integrated into the SMS and consequently were not monitored by ADM's quality assurance program".

It was found that Servisair's own staff training programme for its airside workers involved new recruits "normally" receiving one week of classroom training followed by some practical training on the apron. However, it was noted that classroom training provided on the use of fire extinguishers did not include instruction on the types of extinguisher in use at the airport and the practical training "did not include instruction on how to use fire extinguishers nor what to do in emergency situations when passengers are evacuated onto the apron." It was additionally found that two employees of a major airline who were providing turn-around maintenance on the occurrence aircraft and who had participated in the response had been provided with adequate training on the handling of ramp fire extinguishers and basic response in emergency situations. 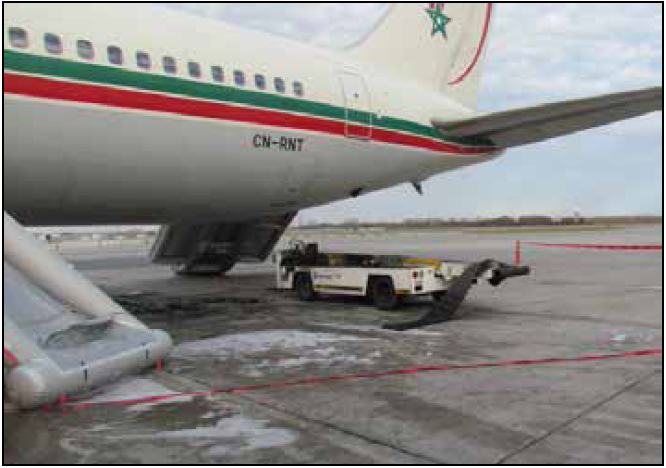 It was found that the petrol-engined belt loader, a TUG Technologies model 660-42, had been supplied new to Servisair in 2005. It did not have, and was not required to have, emergency stop buttons which would have made it possible to shut down the engine and cut all electrical power to the fuel pump. The portable fire extinguisher mounted on the left side platform just in front of the rear wheel was not used during the fire.

The loader was severely damaged by the fire which was found to have started in the rear part of the engine when a fuel line failed where an exhaust pipe crosses underneath the gear box located immediately below the fuel filter regulator. The fire was then fuel fed until the fuel was exhausted. No evidence of any incorrect installation of components was found and it was noted that a 500 hour/120 day inspection required under the established maintenance programme recommended by the equipment manufacturer did not include any special verification of the integrity of the fuel system. The most recent of these periodic inspections was found to have taken place 12 operating hours prior to the fire. Prior to this, it was found that the previous required inspection had been delayed beyond the specified interval so that it had take place only 69 hours/35 days earlier.

The Investigation noted that the Airport Fire Service had no record of when they received the first call alerting them to the fire, which started at just over four minutes after the aircraft had come to a stop at the gate. The first of six Fire Service vehicles arrived at the scene of the fire 4.5 minutes after it had started having taken just under 2 minutes to drive from their base along a route of just over 1 mile.

The formally stated Findings of the Investigation as to Causes and Contributory Factors' were as follows:

Safety Action taken as a result of the occurrence was recorded as including the following:

The Final Report was authorised for release on 28 January 2015 and officially released on 3 February 2015. No Safety Recommendations were made as a result of the Investigation.