On 15 August 2019, a Boeing 767-300 made a high speed rejected takeoff because of increasing noise from an unsecured flight deck sliding window. Whilst subsequently taxiing during the calculated brake cooling time, fire broke out in the left main gear bay and the aircraft was stopped and an emergency evacuation was carried out whilst the fire was being successfully extinguished. The Investigation did not identify any specific cause for the brake unit fires but noted that the reject had been called when 3 knots above V1 and that the maximum speed subsequently reached had been 14 knots above it.

On 15 August 2019, a Boeing 767-300 (N378AX) being operated by Omni Air International with an augmented flight crew on an international passenger transport flight carrying US military personnel from the USA to Kuwait via Shannon was accelerating for takeoff from runway 24 in normal night visibility when an unusual noise was heard and the Captain decided to reject the takeoff at high speed. The reject was uneventful but almost half an hour later whilst the aircraft was taxiing from its initial post-reject holding position via the runway to return to the gate for inspections, fire broke out in the left main gear bay. A precautionary emergency evacuation was carried out and the AFRS attended and extinguished the fire. One of the 143 passengers sustained a minor injury and the two forward wheels of the left main gear bogie and their associated brake units and tyre sustained substantial damage.

A Field Investigation was carried out by the Irish AAIU. The 2 hour CVR and the FDR were removed from the aircraft and their respective data were successfully downloaded. ATC recorded data was also available.

It was established that during the takeoff roll on the 3,199 metre-long runway 24, the Captain heard an unusual noise which, as it was increasing in volume, led him to take control from the First Officer and reject the takeoff from a high speed. Both operating crew stated that they believed the maximum speed had been around 100 knots which was well below the applicable V1 of 146 KIAS. On instructions from the TWR controller, the aircraft was taxied onto taxiway ‘A’ to carry out checks and calculate the required brake cooling time before another takeoff could be attempted. They subsequently advised ATC that they would need to wait 35-40 minutes and were then directed to taxi to hold on Taxiway C. Whilst there, the IRO contacted the company Maintenance Department, who advised that the aircraft should return to stand so that inspections could be carried out and permission for this was requested and received from ATC.

As this relocation began the Captain remarked that the aircraft was “pulling to the left” and as a result intended to taxi slowly. A rumbling noise was audible on the CVR at this time and prompted a brief crew discussion about the possibility of a deflated tyre. Due to extensive taxiway closures, the route back to the stand involved re-entering and routing along the runway and whilst this was in progress, the controller advised that smoke could be seen coming from the aircraft left main landing gear. The flight crew requested a service vehicle to assist and on arriving at the aircraft, the airport duty officer driving it informed ATC that the left main landing gear was on fire. The TWR controller immediately informed the crew and requested that they initiate an emergency evacuation from the right hand side of the aircraft and dispatched the AFRS to the scene. The 152 passengers and cabin crew were quickly evacuated using escape slides and ATC were advised that the fire had been extinguished and that the flight crew were also about to leave. 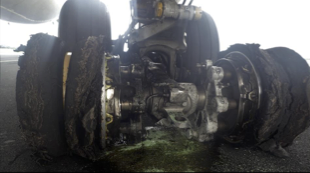 A review of the CVR data found that there had been no V1 call prior to a reject call three knots above it at 149 KCAS. FDR data showed that the actual maximum speed had been 160 KCAS after the thrust levers had been retarded and maximum auto brake selected at 152 KCAS. An increasingly loud wind noise can be heard on the CVR following the 80 knot call and 10 seconds after that call, the First Officer says “window OK?” but, although this is not acknowledged by the Captain, after a further 7 seconds, the Captain calls “reject”. Conversation between the pilots after the rejected takeoff included their combined suspicion that the most likely cause of the noise would have been a window not closed, although the IRO appeared to say that he had observed a ‘locked’ (i.e. ‘closed’) indication.

Boeing were invited to review the FDR data and provide an analysis of the wheel and brake system performance and concluded that brake pressure had in general been symmetrical with the peak pressures less than half the maximum and in all respects normal. They considered that the longitudinal deceleration during the reject had been consistent with that expected for the aircraft weight, configuration and device use. No evidence was found during the post-reject taxiing of the left yaw that would have been expected had a brake unit been dragging or a brake locked.

The wheel and brake units were remove from the left main bogie and sent to the USA-based OEM where they were examined in the presence of an FAA representative but no specific source of the brake fire could be identified. The associated hydraulic lines were similarly inspected at the corresponding OEM and no ignition source could be identified there either.

It was noted that the Boeing FCTM advises that an open flight deck window does not in itself warrant a high speed rejected takeoff but also notes that the noise from an open window may interfere with crew communications. The Omni Air FCOM was found to state that a rejected take-off should only be performed above 80 knots and prior to V1 if the aircraft is “unsafe or unable to fly’" In this instance, the Captain decided to reject the takeoff because of the unidentified and (significantly) the increasing level of noise. As alluded to in the Boeing FCTM, the noise itself prevented effective communications between the First Officer and the Captain and it was therefore considered likely that the Captain did not hear the First Officer querying the status of the left sliding window.

On the same subject, it was found that the Boeing FCOM ‘Before Start Procedure’ specifies that two checks should be made to confirm that a flight deck sliding window is closed and locked - the lock lever must be in the forward position and the ‘window not closed’ decal located under the window must not be visible. In addition to this normal procedure, the Captain stated the window indicators above each window were checked. However, Boeing advised that this window indicator only identifies the position of the window latch cam and is a secondary method of verifying that the window is latched after the two FCOM checks have been completed.

Finally, it was noted that FAA 14 CFR 25.109 states that “a satisfactory after-stop condition is defined as one in which fires are confined to tyres, wheels and brakes, such that progressive engulfment of the rest of the aircraft would not occur during the time of passenger and crew evacuation (and that) the application of firefighting means or artificial coolants should not be required for a period of 5 minutes following the stop”.

The documented Findings of the Investigation included, but were not limited to the following:

The Probable Cause of the Serious Incident was determined as “fire in the brake assembly during taxi following a high-speed rejected take-off which occurred 28 minutes earlier”.

The Final Report of the Investigation was published on 22 November 2021. No Safety Recommendations were made.