On 12 July 2015, a Japanese-operated Boeing 767-300 deviated from its acknowledged clearance and lit-centreline taxi routing and began take-off from a parallel taxiway in good night visibility, crossing a lit red stop bar in the process. When ATC observed this, the aircraft was instructed to stop which was achieved without further event. A subsequent take-off was uneventful. The crew did not report the event to their airline or their State authorities because the Captain determined that this case did not need to be reported and these organisations only became aware when subsequently contacted by the Investigating Agency.

On 12 July 2015, a Boeing 767-300ER (JA-606J) being operated by Japan Airlines on a scheduled passenger flight from Singapore Changi to Tokyo Haneda failed to follow its taxi clearance at night in normal ground visibility and attempted to take-off from a taxiway parallel to the departure runway. When ATC observed this, the controller instructed the aircraft to stop which was achieved without further event. After verifying with the flight crew that they could continue with the flight, it was re-cleared to taxi to the departure runway 20C via a new lit-centreline routing and the aircraft subsequently took off without further event.

It was established that the First Officer had been acting as PF and that both pilots had been in and out of Singapore four times. The Investigation did not note the overall or aircraft type flying experience of the two pilots involved or the Captain's time in command.

In accordance with standard ATC operating procedures at night or in low visibility with a fully serviceable lit centreline control system available, the clearance was given as usual by switching on the lit centreline for the required route and instructing the aircraft to "taxi on the greens" - as three other departing aircraft had earlier done.

On transfer to the TWR controller, the crew confirmed that they were ready for take-off and were requested to expedite taxiing. As the aircraft continued taxiing on NC2 and passed taxiway A7, clearance to line up and take off on Runway 20C was given. The aircraft completed the right turn onto taxiway EP and the First Officer was reported to have called "runway heading check" which the Captain subsequently stated he had assumed meant that the First Officer "had verified that the aircraft was lined up on the runway in accordance with the take-off procedure in the Operator’s Aircraft Operating Manual". What this Manual actually required was found to be "before entering the departure runway, verify that the runway and runway entry point are correct”, and “verify that the airplane heading agrees with the assigned runway heading”.

Take-off was then commenced and the aircraft crossed the lit red stop bar on taxiway EP. The TWR controller observed what was happening and instructed the aircraft to stop which it did before reaching taxiway A3. This instruction was found to have been given prior to the commencement of a rejected take-off. The maximum speed reached was not published. 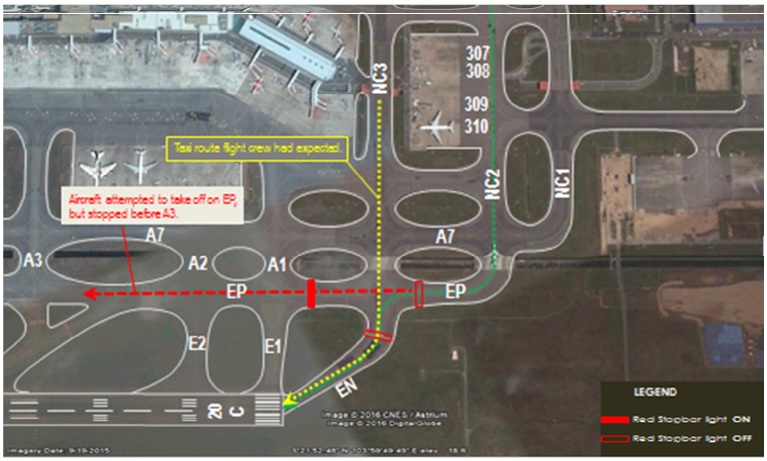 Taxiway centreline lights (in green), deviation of aircraft (in red), and taxi route anticipated during briefing by the flight crew (in yellow) [reproduced from the Official Report]

During the course of a review of the sequence of events, the Investigation concluded in respect of the performance of the flight crew that:

It was noted that the airline involved used the LOSA process to monitor the day-to day performance of its flight crew.

The Investigation also considered ways in which the resilience of the current departure taxi procedures might be enhanced and concluded that:

Safety Action taken as a result of the Serious Incident and notified to the Investigation included the following:

The Final Report of the Investigation was published on 29 July 2016.