On 5 December 2010 a Boeing 767-300 being operated by Qantas and departing Melbourne for Sydney in day VMC was following a Boeing 737-800 being operated by Virgin Australia which had also just departed Melbourne for Brisbane on the same SID and a loss of prescribed separation occurred. ATC became aware that the 767 was catching up with the 737 but were aware that it was in visual contact and therefore took no action to ensure separation was maintained. No TCAS activation occurred.

On 5 December 2010 a Boeing 767-300 being operated by Qantas and departing Melbourne for Sydney in day Visual Meteorological Conditions (VMC) was following a Boeing 737-800 being operated by Virgin Australia which had also just departed Melbourne for Brisbane on the same SID and a loss of prescribed separation occurred. ATC became aware that the 767 was catching up with the 737 but were aware that it was in visual contact and therefore took no action to ensure separation was maintained. No Airborne Collision Avoidance System (ACAS) activation occurred.

An Investigation by the Australian Transport Safety Bureau (ATSB) established that 737 had reduced speed in order to meet a height requirement of the SID being flown which had led to the 767 climbing at a significantly faster speed. It was noted that on transfer from TWR to radar departures, there was 3.4 nm separation between the two aircraft. However, the departures controller expected them to climb at a similar speed and “did not recognise the loss of separation assurance”. Once the problem was identified, the controller’s response was judged to have been “not fully effective” and separation reduced to 1.9 nm horizontally when 500 feet apart vertically. However, as the closing speed was relatively low, it was considered that there had been “a significant period for the problem to be detected and rectified”.

The Investigation reviewed recorded ATC communications and found that the 767 was not formally given the responsibility of maintaining visual separation with the 737. The controller was unable to explain why the visual separation standard had not been applied appropriately.

The relevant element of required speed control procedures was reviewed and the following information was found in the Manual of Air Traffic Services:

It was also noted that a standard procedure known as ‘Auto Release’ had been in use at Melbourne at the time of the event to facilitate handover of departing traffic so as to minimise voice coordination between Tower and Departures. This procedure was found to have been based on a similar arrangement at Sydney but the associated ‘Safety Assessment’ carried out by the ANSP for Melbourne had not included a detailed comparison of the two procedures and related risk controls and had failed to explain why the speed restrictions in use at Sydney were not part of the Melbourne procedure.

Short Term Conflict Alert (STCA) activation that indicated “a system-detected critical event requiring immediate controller intervention” was found to have occurred during the conflict and had been acknowledged by the Departures controller involved. It was noted that MATS-defined parameters for STCA activation in the Melbourne TMA were specified as 2.1 nm or a controller warning time of 60 seconds. 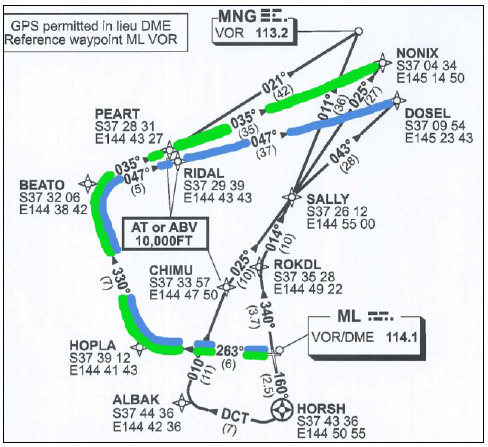 During the course of the Investigation into the 2010 event, a similar loss of separation occurred at Melbourne on 12 October 2011 between an Airbus A320-232 being operated by JetStar Airways on a scheduled passenger flight from Melbourne to Auckland, New Zealand and a Boeing 737 800 being operated by Virgin Blue on a scheduled passenger flight from Melbourne to Gold Coast. In this case, a slow speed climb by the A320 was also attributed to the need to make a SID height restriction. ATC procedures for this second conflict were unchanged from those in place the previous year and Auto Release procedures were again in use. Loss of prescribed separation occurred just as the lead aircraft was making a left turn which the following aircraft was not required to make. Again, neither aircraft TCAS had been activated. It was found that this incident had involved different controllers to those involved in the 5 December 2010 event.

The Investigation considered that the two events had both independently demonstrated limitations in risk management which “had the potential to lead to higher-risk situations, particularly during high-workload periods”. A series of Findings relating to the 2010 event were documented as follows but it was noted that similar findings also applied to the 2011 event.

Safety Action was noted to have taken by ANSP Airservices Australia - interim local action at Melbourne to deal with the issue raised - and by Safety Regulator CASA to proceed with a new generic requirement applicable to all radar terminal area aerodromes in Australia for jet aircraft pilots notify ATC when operating at a significantly lower speed than stipulated in any standard profile being flown.

The Final Report was issued on 2 May 2012. In the light of the achieved and intended Safety Action, no Safety Recommendations were made.