On 27 July 2007, a British Airways Boeing 777-200ER collided, during pushback, with a stationary Airbus A321-200. The A321 was awaiting activation of the electronic Stand Entry Guidance (SEG) and expecting entry to its designated gate.

On 26 February 2007, a Boeing 777-222 operated by United Airlines, after pushback from the stand at London Heathrow Airport, experienced internal failure of an electrical component which subsequently led to under-floor fire. The aircraft returned to a stand where was attended by the Airfield Fire Service and the passengers were evacuated.

This is an extract from the aircraft accident Report (2/2009) published by the Aircraft Accident Investigation Branch (AAIB), UK:

The accident occurred during engine start after pushback from the stand. After the right generator came online an electrical failure occurred in the right main bus. The failure resulted in severe internal arcing and short circuits inside the two main power cont actors of the right main bus. The heat generated during the failure resulted in the contactor casings becoming compromised, causing molten metal droplets to fall down onto the insulation blankets below. The insulation blankets ignited and a fire spread underneath a floor panel to the opposite electrical panel (P205) (see Figure 1), causing heat and fire damage to structure, cooling ducts and wiring. 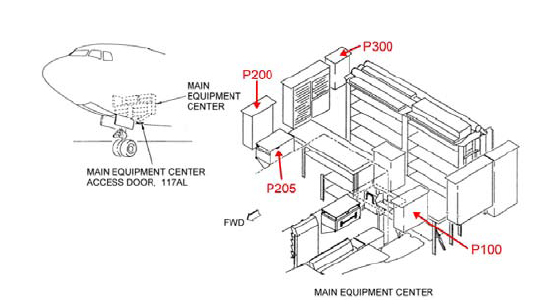 The flight crew responded to the bus failure and a burning smell by shutting down the right engine and taxiing to a nearby stand. The Airfield Fire Service attended the aircraft when it arrived on stand and entered the Main Equipment Centre where they discovered significant smoke but no fire. The passengers were evacuated uneventfully via steps.