On 29 July 2011 an oxygen-fed fire started in the flight deck of an Egypt Air Boeing 777-200 about to depart from Cairo with most passengers boarded. The fire rapidly took hold despite attempts at extinguishing it but all passengers were safely evacuated via the still-attached air bridge access to doors 1L and 2L. The flight deck and adjacent structure was severely damaged. The Investigation could not conclusively determine the cause of the fire but suspected that wiring damage attributable to inadequately secured cabling may have provided a source of ignition for an oxygen leak from the crew emergency supply

On 29 July 2011, a Boeing 777-200 being operated by EgyptAir on a scheduled passenger flight to Jeddah was parked on the departure gate whilst awaiting the last few passengers and completion of hold loading when a fire suddenly began at the lower right hand side of the flight deck. Despite prompt attempts to extinguish the fire, it continued to burn out of control causing major structural damage to the front of the aircraft. However, all 317 occupants were safely evacuated using the still-attached air bridge access at doors 1L and 2L.

An Investigation was carried out by the Egyptian CAA Air Accident Investigation Central Directorate (AAICD). Flight Data Recorder (FDR), Cockpit Voice Recorder (CVR) and QAR downloads were available to assist the Investigation but as the engines were not running, there was no useful data on the FDR and the QAR contained only data relating to the operation of the APU and to electrical power supplied by it. An initial “Investigation Progress Statement” was released on 18 October 2011 which detailed the initially established factual information and some response actions by Boeing in respect of the integrity of aircraft systems which it appeared may have been involved in the fire.

It was established that the crew were waiting for the last few passengers to board the aircraft parked at Gate F7 Terminal 3, with all fight deck pre-flight preparations complete, the APU running and the GPU disconnected. The pilots had heard a loud “pop” followed by a hissing sound coming from the right side of his seat with fire and smoke almost began to come from the right side console area below the side flight deck window. The Captain had immediately instructed the First Officer to leave the flight deck and “notify a flight deck fire”, which he did and told the cabin crew to deplane all the passengers and crew from the aircraft, based on the Captain’s order and using the two still-attached airbridges. He then left the aircraft via the door 1L airbridge stairs in an attempt to find anyone with a radio but he could not and so he returned to the service road in front of the aircraft and stopped a car and asked the person in the car to notify the fire department by radio that the aircraft is on fire. The first airport fire tender arrive after three minutes.

Meanwhile, the Captain had used the flight deck fire extinguisher bottle located behind his seat in attempt to fight and extinguish the fire but the attempt was unsuccessful and the fire continued. No attempt was made to use the aircraft radios to advise of the fire and evacuation and the first communication by radio to report the fire was by the Captain of the aircraft that was parked at the adjacent gate F8. Evacuation of all occupants was reported by the Captain, who was the last to leave the aircraft via door 2L, to have taken “about 4 to 5 minutes”.

Completion of successful fire extinguishing was protracted and it was 90 minutes before the fire was out and subsequent cooling action had been completed. It was reported that “7 persons (Egypt Air employees, passengers and fire fighting personnel) suffered from mild asphyxia caused by smoke inhalation during the attempt to extinguish the fire”.

Damage to the aircraft was mainly obvious internally where the flight deck was completely burned out by the intense fire - see the picture below - but also included two holes burned through the aircraft external skin just below the First Officer’s window, - see the second picture below - as well as smoke damage throughout the aircraft and heat damage on overhead structures well aft of the cockpit. 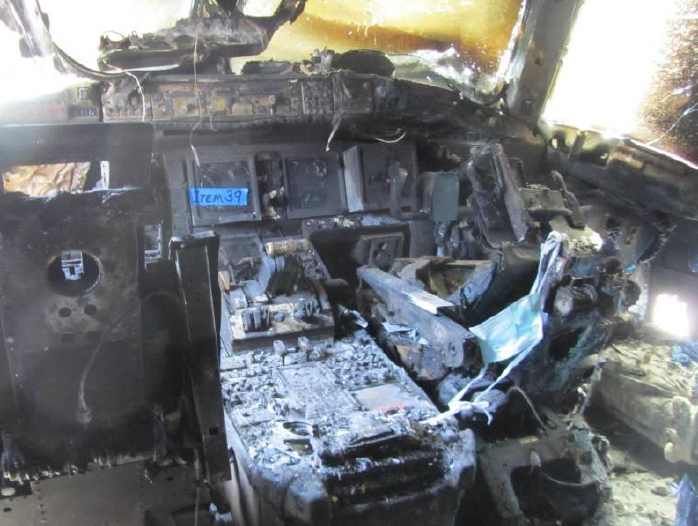 Fire damage to the flight deck (reproduced from the Official Report) 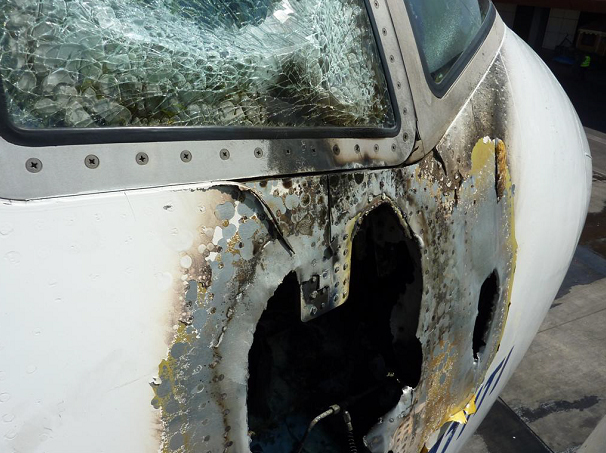 Holes burned through the aircraft external skin during the fire, the larger one measuring approximately 75cm x 40cm (reproduced from the Official Report)

Examination of the aircraft established that the fire had originated near to the First Officer's oxygen mask supply tubing, which is located beneath the side console below the No. 3 right hand flight deck window. This position was described by the First Officer as being “at the level of the hinge between the top parts of the right window, the fixed and moveable parts, in the plastic at the console itself”. It was concluded that a continuing supply of oxygen from the First Officer’s oxygen system must have contributed to the intensity of the fire and the speed at which it spread. However, it proved impossible to conclusively determine the root cause of ignition and it was also not possible to be sure whether the breach of the oxygen system occurred first thus providing a flammable environment or whether the oxygen system breach occurred as a result of the fire.

It was noted that the First Officer had reported to the Investigation that his routine function testing of the oxygen supply to the right hand side emergency oxygen mask completed as part of his pre flight checks had been made approximately 35 minutes prior to the start of the fire.

Examination of other aircraft in Egypt Air’s Boeing 777-200 and -300 fleet found that all 777-200 aircraft had 5 volt AC wiring to the First Officer’s oxygen mask light plate which was different to Boeing’s delivery specification in that a required wire clamp was missing, the wiring was not sleeved and a large loop of unsupported wire was found. On the Captain’s side, the wiring was similar except that sleeving was present on all the aircraft inspected. On one of the -200 aircraft, the outer layer of wiring insulation was found to be damaged, although the inner layer was intact and the conductor was not exposed.

It was acknowledged as a result of the fire, Boeing had “conducted an extensive test program to determine if the oxygen system hoses were electrically conductive and if they could have ignited if an electrical fault was present that involved these components”. As a result of this work, Boeing had determined that it was appropriate to install sleeving on these wires and released Service Bulletin 777-33-0042 dated 25 October 2011 - subsequently revised on 9 January 2012 and again on 4 April 2012 - which recommended that 777 operators inspect and if necessary repair the oxygen light plate wiring at both pilot positions.

The formal statement of Probable Cause was as follows:

The Final Report of the Investigation was published in September 2012.