On 24 July 2018, a Boeing 777-200 making its second attempt to land at Dhaka in moderate to heavy rain partly left the runway during its landing roll and its right main landing gear sustained serious impact damage before the whole aircraft returned to the runway with its damaged gear assembly then causing runway damage. The Investigation attributed the excursion to the flight crew s inadequate coordination during manual handling of the aircraft and noted both the immediate further approach in unchanged weather conditions and the decision to continue to a landing despite poor visibility instead of going around again.

On 24 July 2018, a Boeing 777-200 (HS-TJD) being operated by Thai Airways on a scheduled international passenger flight from Bangkok to Dhaka as TG 321 encountered adverse weather at its destination and after an unsuccessful first approach, the landing off the second one was followed by the right hand main landing gear being off the paved surface for part of the landing roll during which obstructions were encountered that severely damaged it. After finally leaving the runway onto an RET and stopping on it, aware that significant tyre damage must have occurred, the flight crew had not called TWR, who were unaware of the excursion due to restricted visibility until the next landing aircraft reported debris on the runway. There were no injuries to the 170 occupants but substantial damage was caused to the aircraft, the runway and installations in the vicinity of the right hand runway edge.

An Investigation was carried out by the Bangladesh Aircraft Accident Investigation Group (AAIG). Relevant recorded flight data was available from the FDR and the CVR which were both removed from the aircraft. A Preliminary Report detailing initial progress with the Investigation was published on 23 August 2018.

It was established that an initial ILS Cat 1 approach to runway 14 at Dhaka had been flown with the First Officer as PF. On 6½ nm final, the aircraft had been transferred to TWR and on checking in had been cleared to land and advised that the surface wind was 230°/11 knots and that the runway surface was wet. The actual weather conditions at the time included a visibility of 2000 metres in “moderate to heavy rain” with a 900 foot cloud base and FEW CB at 2,500 feet. Neither pilot obtained visual contact with the runway and they subsequently stated that they had commenced a go around “from the MAP”. FDR data showed that the aircraft had descended to 79 feet agl before beginning the go around.

The crew requested and received radar vectors towards a second ILS approach and three minutes after reporting a go around from the first approach, the aircraft was reporting established on the 14 ILS LLZ at 10 nm, this time with the Captain having taken over as PF. After reporting fully established on the ILS, the aircraft was transferred to TWR and cleared to land with the surface wind at 250°/10 knots onto the wet runway. At this time, unknown to the crew, a SPECI was issued which materially differed from one issued ten minutes earlier only by the change of present weather from RA (rain) to TSRA (thunderstorm rain).

The crew subsequently reported having sighted the approach lights with “the Captain then sighting the runway followed by the First Officer just prior to minima at 135-145 feet agl” during what was stated by the Investigation to have been “moderate to heavy rain”. The AP was disconnected at 135 feet agl and the aircraft was then de-crabbed and the right wing banked into wind to compensate for what was estimated as having been an 8 knot crosswind component with left rudder applied to counteract the resultant drift. Touchdown with the right main gear first then occurred ahead of the TDZ (touchdown zone) just 175 metres past the threshold with an estimated 15° right bank and to the right of the runway centreline. A drift right on the 45 metre wide runway continued for approximately 230 metres until the right main gear wheels departed the paved surface onto the adjacent “grassy-mud” surface. The aircraft then turned left to track “almost parallel” to the runway with the right main gear around 2 metres from its edge for a further 470 metres during which time the right main gear assembly ran over a series of nine concrete cable-laying pits, each about 1.5 metres by 0.6 metre in size, covered with iron sheets and protruding above the ground by 10/15 cm which resulted in significant impact damage to all six tyres and their wheels.

The aircraft then fully regained the runway surface and continued on it for about 1500 metres whilst gradually tracking back to the centreline before turning onto the RET which began 830 metres from the end of the 3,200 metre long runway and subsequently stopping near its junction with the parallel (southern) taxiway. Runway and taxiway surface damage caused by right main gear wheel rims was found from the point where that gear assembly returned to the runway until the final stopping position, a total distance of 1980 metres.

The excursion was not visible to the TWR controller because of the poor visibility and they therefore gave the usual frequency change to GND after seeing the aircraft clear the runway. In the absence of any report from the 777 crew, it was only after another aircraft, a Jet Airways Boeing 737-800, had landed two minutes later and reported “scattered debris on the right edge of the runway” that the controller became aware of anything untoward having occurred. They then immediately suspended further use of the runway and ordered a runway inspection. This then confirmed that the 777 had been involved in a runway excursion and so the controller then despatched the emergency services to the stationary 777.

Damage to the right main landing gear was found to include all six tyres “partially and/or completely torn and damaged with wheel hubs broken and exposed with the entire wheel-well having grass-mud deposition”. The brake assemblies of some wheels were also damaged with a number of cables detached from the wheel assembly and minor damage was found to the right inner flap and the right engine exhaust area had ingested “grassy mud”. 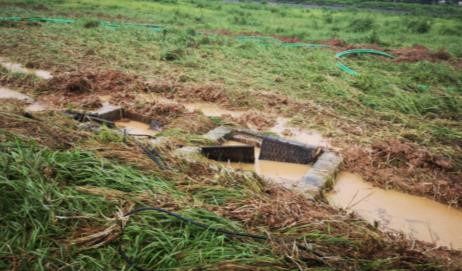 One of the nine identical obstructions showing the wheel track directly over them. [Reproduced from the Official Report]

It was noted that the runway had centreline lighting which, like all the other runway and approach lighting, had been working normally. The flight crew stated they had been aware that the aircraft had touched down near the right hand edge of the runway but that they had not been aware of the excursion which followed despite the right main gear impact with significant obstructions. They stated that only when the aircraft began “juddering mildly” as they slowly regained the runway centreline had they recognised that right main gear tyre failure must have occurred. The Investigation noted that retread tyres were fitted to the aircraft.

The Cause of the excursion was formally documented as ‘Flight Crew Human Factors’ as follows: