On 2 May 2015, a Boeing 777-200 deviating very significantly north of its normal route from Malabo to Douala at night because of convective weather had just turned towards Douala very close to 13,202 feet high Mount Cameroon whilst descending through 5000 feet, when an EGPWS TERRAIN AHEAD alert and ‘PULL UP’ warning prompted an 8,000 foot climb which passed within 2,100 feet of terrain when close to and still below the summit. The Investigation attributed the dangerous event primarily to a gross absence of the augmented crew’s situational awareness and the operator’s failure to risk-assess the route involved.

On 2 May 2015, a Boeing 777-200 (F-GSPG) being operated by Air France on a scheduled 40 minute international passenger flight from Malabo Equatorial Guinea to Douala Cameroon in night IMC by an augmented crew was taken significantly off the flight planned FL090 route to avoid convective weather. An EGPWS PULL UP Warning subsequently occurred when close to 13,202 feet high Mount Cameroon shortly after beginning descent towards destination when 8000 feet below its summit. The 8000 feet emergency climb response resulted in terrain clearance of 2,100 feet. The flight was thereafter completed without further event.

After Air France had informed the French Civil Aviation Accident Investigation Agency (the BEA) of the event, the Cameroonian authorities were notified and delegated the Investigation to the BEA. Despite the fact that Air France in Paris was informed by the crew of the event on arriving at the transit stop in Douala before they proceeded to Paris as scheduled, continued flight crew duty was approved and CVR data from this Serious Incident was not protected. The Investigation was based mainly on FDR/QAR data and crew statements subsequently submitted.

Prior to taxiing out at Malabo with the First Officer designated as PF, it was reported that a “departure and arrival briefing” was completed by the crew. This was stated to have included a request by the Captain for the Relief First Officer to act as a vigilant general observer and monitor compliance with safety altitudes in particular. The presence of high terrain on the left side of the Malabo runway 22 climb out was also mentioned because documented company procedures required that a right turn must be made to take up the flight planned track to Douala rather than the FMS-specified left turn. Although the crew were generally aware of the presence of convective activity in the area, all the company Operation Control Centre could advise on was the expected arrival weather at Douala which was “considered acceptable” and the crew were “unaware of the precise meteorological conditions along the route prior to takeoff”.

After an on-time departure, the planned right turn to take up the easterly track to Douala was made and the AP engaged. Having then observed numerous storm cells ahead on radar, although these were “not touching”, it was decided to turn left and head northeast away from the flight plan route. Both NDs were set to weather mode with the scale on the PM’s ND initially set to 20 nm before being progressively increased to 80 nm as the climb to cruise at FL090 continued and that of PF being initially set to 80 nm and then, as the top of climb neared, to 40nm. The crew reported having used the Douala STAR plate for their expected runway 30 arrival at Douala for en route navigation purposes (see the illustration below) which shows Malabo as an insert rather than in its actual position much further west. 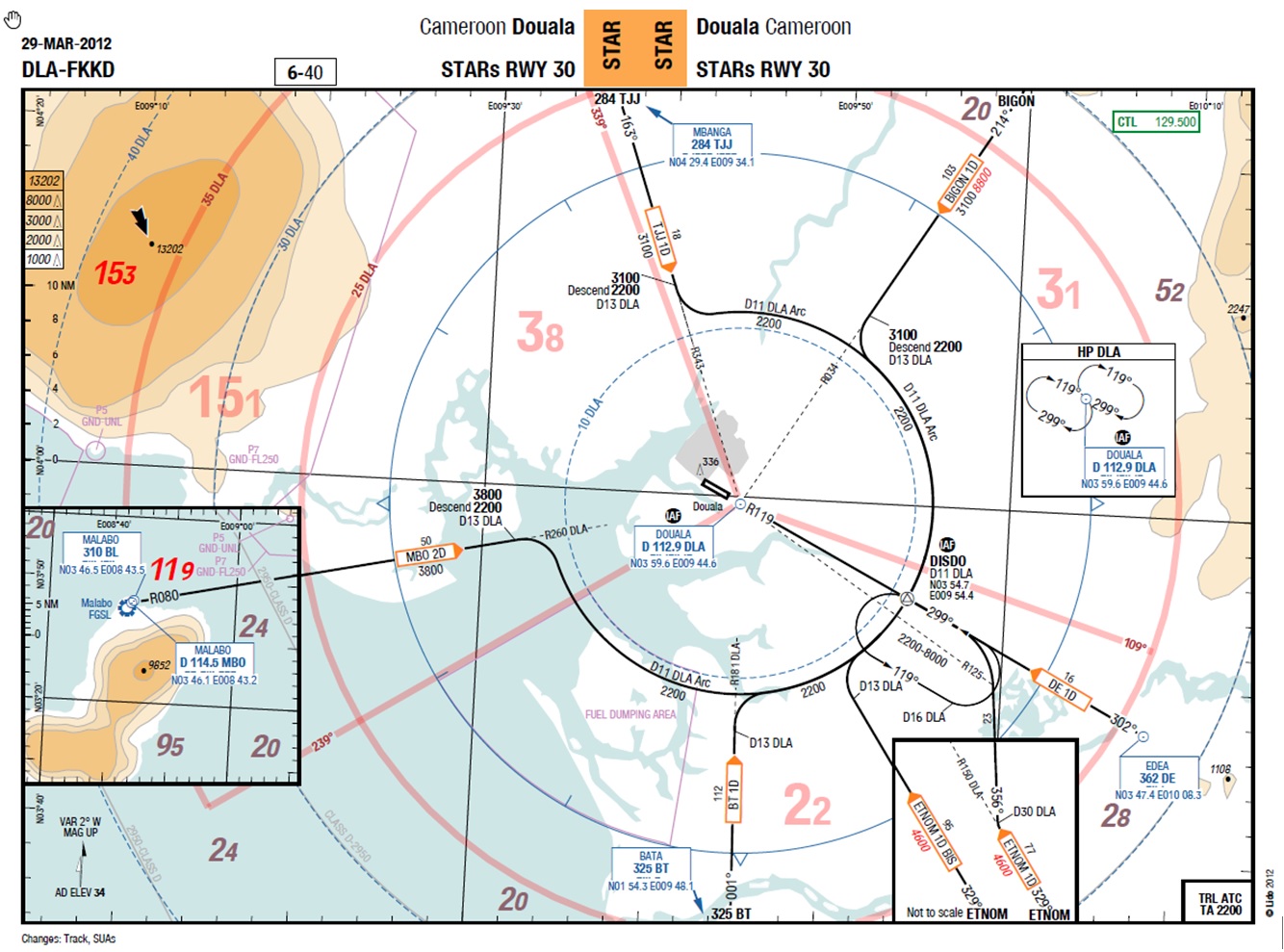 The chart used for en-route navigation. [Reproduced from the Official Report]

The PF stated that when he saw a large red return on his ND ahead of the aircraft and another oblong red return to the right, both of which “seemed to be moving forward with the aircraft”, he had not understood what was causing it and so he had changed his radar to terrain mode which automatically changed the scale to 80 nm. After “six seconds”, he stated that he had then reset weather mode having concluded that “the return ahead of the aircraft was a ground return from Mount Cameroon" and that the oblong red return on the right of the route was a “false return”.

Approximately ten minutes after takeoff with the aircraft 6nm north-west of Mount Cameroon, the Captain suggested making a right turn to pick up the ILS DME arc to runway 30 at Douala and the PF then changed the selected heading from 061° to 120° (see the ground track illustration below).

Half a minute later at approximately 5000 feet agl, a four second EGPWS “TERRAIN AHEAD” caution was activated and both NDs automatically changed to terrain mode. The PF responded to the caution by increasing the selected heading to from 120° to 134° and 10 seconds after the EGPWS caution had started, with the height above terrain having decreased to a recorded 4,150 feet, a “TERRAIN AHEAD PULL UP” Warning was annunciated. The crew reported that their NDs had “turned red” and both the PF and the Observing Cabin Crew mentioned in their subsequent statements that they had “made out trees to the right of the aircraft” - the observing cabin crew subsequently noting that the trees had been visible because at that point the aircraft was clear of cloud and there was a full moon. 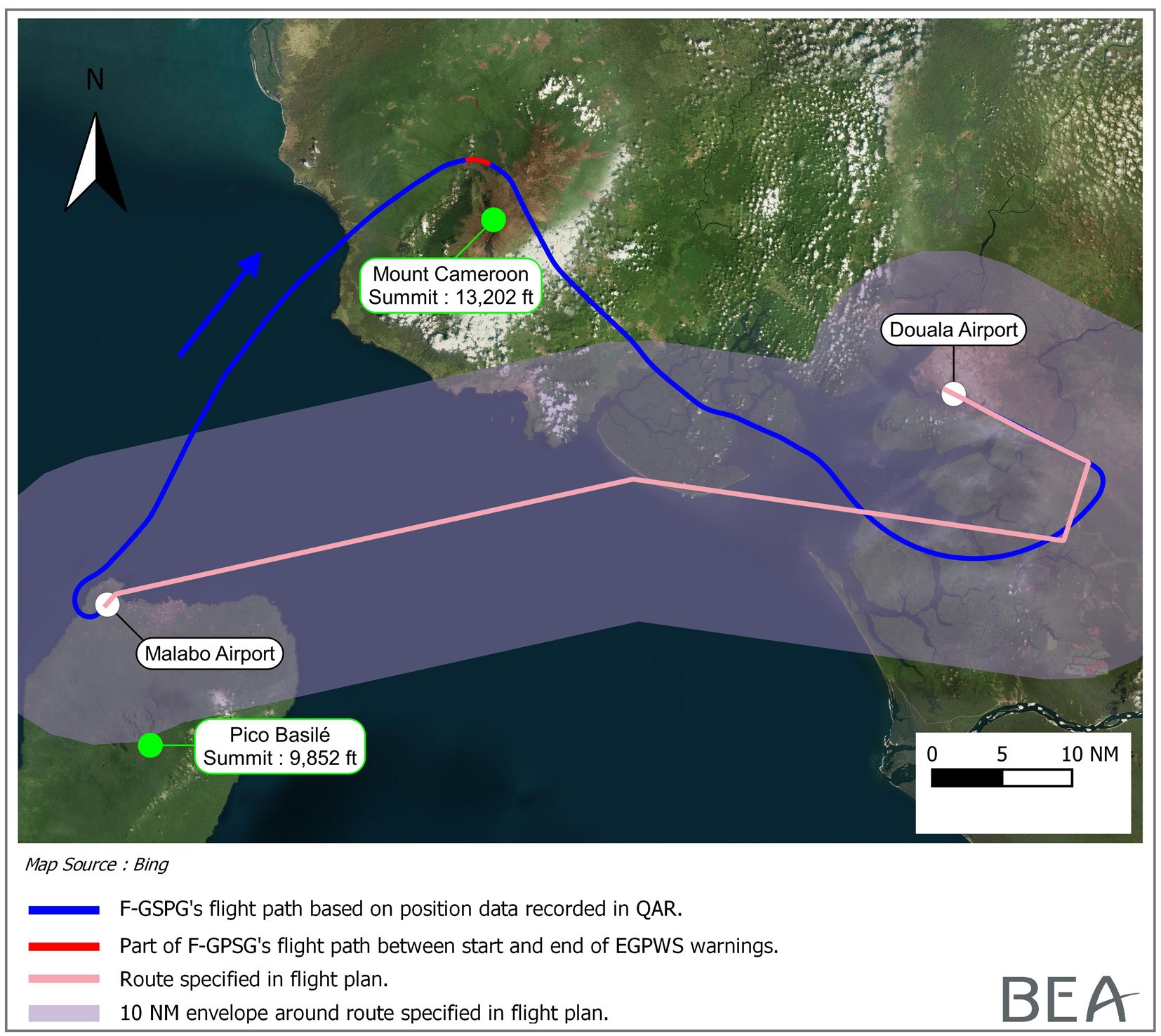 The flight plan and actual ground tracks showing the EGPWS location in red. [Reproduced from the Official Report]

The PF disconnected the AP, made a nose-up input and set maximum thrust. The A/T was disengaged five seconds after the climb commenced. During the eight seconds of the PULL UP Warning, the pitch attitude was only increased to a maximum of 15° rather than - as a required memory action - “until the stick shaker or buffet appears”. It was observed that both this and the continuation of the right turn had reduced the rate of climb which could have made the difference between a successful escape manoeuvre and terrain impact. The Relief First Officer “asked the PF to level the wings” but this was only done momentarily and the right turn was resumed and a new heading of 150° was selected. When the EGPWS Warning ceased as the aircraft approached FL 110, the Captain told the PF to “stop climbing” which, as the radio altimeter height continued to reduce, was ignored. When still close to the summit of Mount Cameroon, the clearance above terrain reduced to its minimum recorded value of 2,100 feet agl. The Captain repeated his instruction to the PF to stop climbing as FL 120 was passed and the aircraft was eventually levelled at FL 130. Tracking to join the Douala runway 30 ILS DME arc was continued, descent was subsequently commenced and the rest of the flight was uneventful. At no time was Douala ATC, who the flight had been working with since shortly after departing Malabo, informed of the emergency climb or the consequential failure to maintain their cleared flight level. 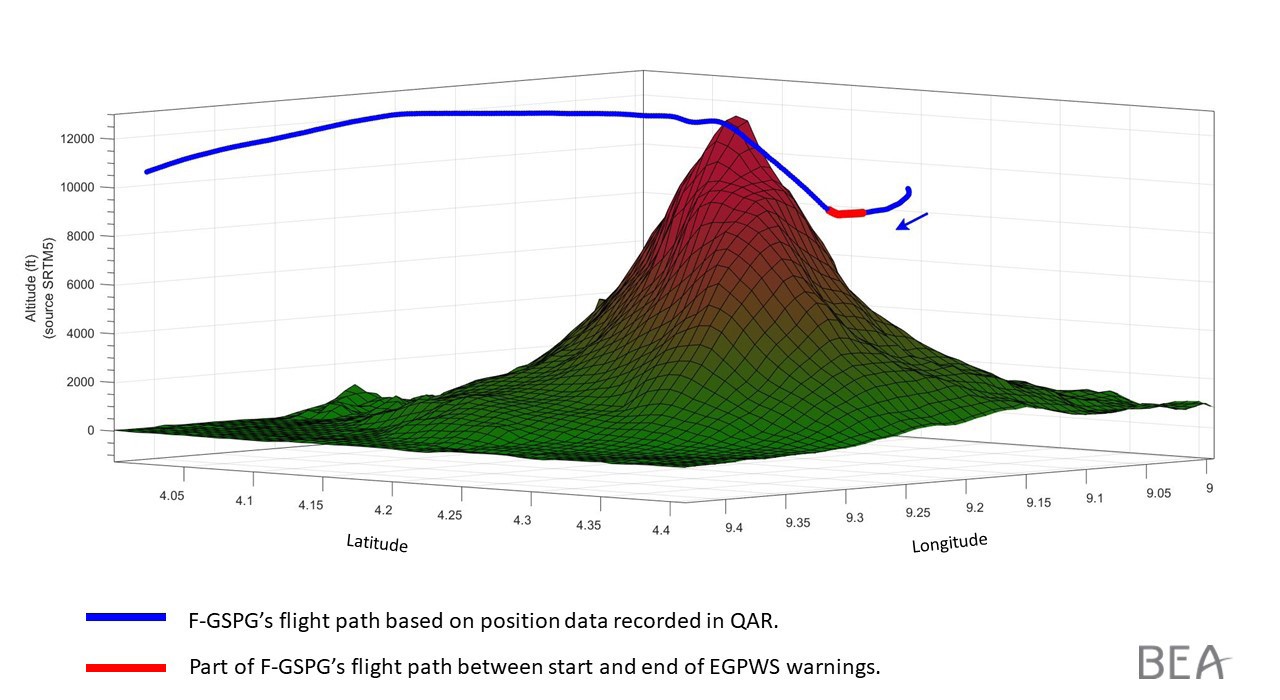 A 3D depiction of the flight path near Mount Cameroon in the absence of situational awareness. [Reproduced from the Official Report] 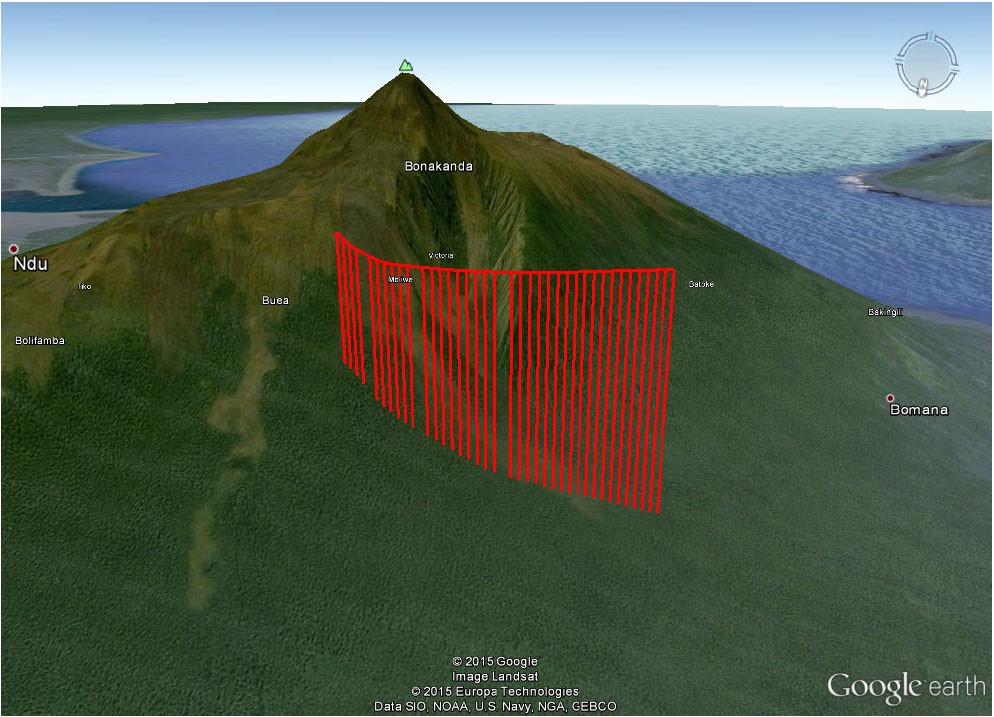 The flight path during the EGPWS activation. [Reproduced from the Official Report] 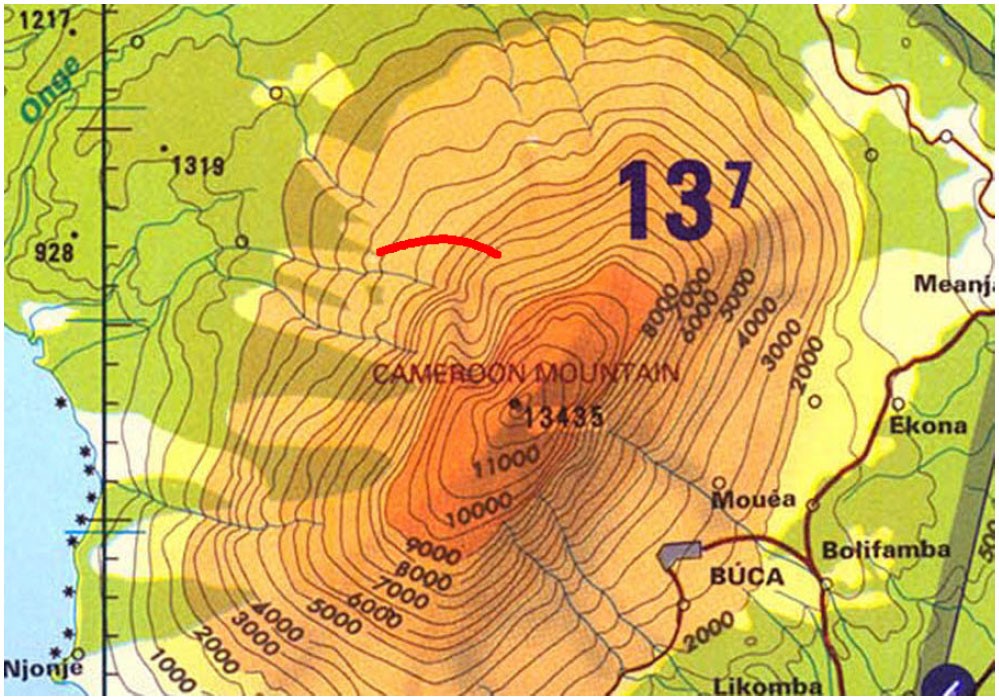 The track during the EGPWS activation. [Reproduced from the Official Report]

The subsequent statements of the flight crew indicated that although prior to departure, it had been agreed that the Captain would set his ND to terrain mode, he stated that during the climb to FL090, he had soon changed it to weather mode. He commented that during the pre-flight briefing, “little mention was made of Mount Cameroon, probably, according to him, because its presence was obvious for everyone”. He also stated that the presentation of this terrain on the STAR chart used for navigation “suggested that it was not a threat to the flight”.

He added that his suggestion that the PF should make a right turn in order to join the DME arc for the approach to Douala had been based on his assumption that they were south of Mount Cameroon and added that “both co-pilots had had doubts before the turn was started”. When the EGPWS was activated, he had been “surprised” and once the climb was under way he had then become “afraid that there might be other conflicting traffic” which was what prompted him to ask the PF to “stop climbing”. He “attributed this fear to a recent simulator training session in which there had been an in-flight collision with another aircraft”.

The PF First Officer stated that his initial refusal to turn right when the Captain suggested it was because of the presence of the red return to the right of track on his ND. He had subsequently commenced it “in order to avoid getting close to the red return ahead” which he had assumed was Mount Cameroon. He stated that this turn had been “started with caution due to doubts as to the exact nature of the return on their right” and shortly afterwards he “had heard the EGPWS annunciations and saw trees on the mountain while they were in the turn”. His (incorrect) recollection was that he had pitched up to 20°. He thought that the ND displayed red blocks up to around 13,000 feet and heard the Captain’s calls to stop climbing at 11,000 feet and then at 12,000 feet before they stabilised at 13,000 feet. The Relief First Officer stated that he too had been “surprised” by the EGPWS annunciations.

Other relevant information documented during the Investigation included the following:

However, the root cause of this near CFIT event was the crew’s tactical decision to base off-route navigation on an arrival (STAR) chart which only showed part of the route.

The Investigation did also note as context that when Air France commenced flying the Malabo-Douala route in 2008, their operational risk assessment covered only the two airports involved and observed that “a risk assessment of the en-route phase of the given route does not exist”. In this latter respect, it was also observed that this particularly short sector was being carried out at unusually low altitudes relative to the terrain in the area and that the whole region was known for “intense meteorological phenomena” capable of significantly affecting aircraft flight paths. It was concluded that “the absence of a study of the en-route phase when carrying out the route study prior to starting flight operations meant that the threat represented by this terrain was not identified” which led to no risk management being implemented.

Five potential Contributory Factors to the complete absence of situational awareness in relation to the proximity of the aircraft to significant terrain in the immediate vicinity of Mount Cameroon were identified as follows:

Safety Action taken by Air France was noted as having included improved flight crew access to weather information at Malabo and modification of Douala STAR plate to show the position of Malabo airport without use of an insert and at the correct scale distance from Mount Cameroon.

The Final Report was initially published in the definitive French language on 3 August 2021 and this was followed on 20 April 2022 by an English Language translation. No Safety Recommendations were made.