On 27 September 2017, a Boeing 777-200LRF Captain left the flight deck to retrieve their crew meal about 40 minutes after departing Abu Dhabi but whilst doing so he collapsed unconscious in the galley and despite assistance subsequently died. A MAYDAY was declared and a diversion to Kuwait successfully completed by the remaining pilot. The Investigation determined that the cause of death was cardiopulmonary system collapse due to a stenosis in the coronary artery. It was noted that the Captain’s medical condition had been partially concealed from detection because of his unapproved use of potentially significant self-medication.

On 27 September 2017, a Boeing 777-200LRF (A6-DDE) being operated by Etihad Airways on an international cargo flight from Abu Dhabi to Amsterdam as ETD927 was in the cruise over international airspace controlled from Bahrain in day VMC when the Captain, who had just left the flight deck to get his crew meal from the galley collapsed and died despite immediate assistance being rendered by the Security Officer and Loadmaster on board and nearby. On being informed, the remaining pilot declared a MAYDAY and diverted the flight to Kuwait without further event.

A comprehensive Investigation was carried out by the UAE GCAA Air Accident Investigation Sector. Relevant data in respect of the operation of the aircraft were obtained from downloaded data from both the CVR and FDR.

The flight was operated by two pilots and with the Captain as PF for the sector and although such freighter flights do not always have any other personnel on board, on this occasion, a loadmaster and a “corporate security officer”. Some 42 minutes into the flight which had reached its initial cruise level of FL320, the Captain handed control to the other pilot and left the flight deck in order to retrieve his crew meal from the galley. On arriving there, as he was removing his meal tray from its stowage, he lost consciousness and collapsed. The corporate security officer was close by and immediately began providing cardiopulmonary resuscitation (CPR). The loadmaster communicated with the other pilot and an immediate decision was made to divert to Kuwait, the nearest available airport. Despite the continuing attempts by the security officer to revive the Captain, his medical condition was severe and the efforts to resuscitate him were not successful. The annotated ground track of the flight is shown on the illustration below. 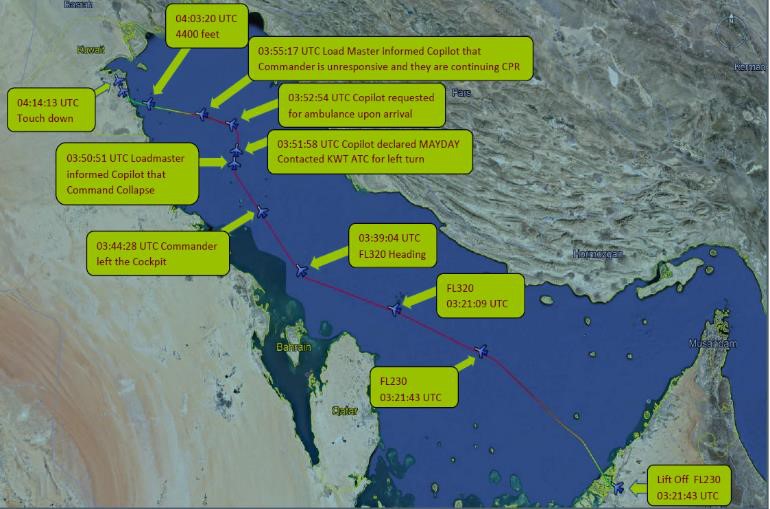 The annotated trajectory of the complete flight. [Reproduced from the Official Report]

The Causes of the Captains incapacitation and subsequent death were recorded as a cardiopulmonary system collapse, caused by a stenosis in the coronary artery. His high cholesterol level caused the coronary artery disease and contributed to the stenosis in the coronary artery. His undeclared use of “over the counter” medication probably contributed to a reduction in his lipid levels.This treatment was not managed by (or known to) the aeromedical examiners involved and it was therefore determined that it was not possible for the aeromedical examiner seen the day before to predict the imminent incapacitation of the Captain.

Safety Action taken as a result of the findings of the Investigation were noted as including the following:

▪    The GCAA Medical Section provided an update to aeromedical examiners on the latest international findings on lipid management and amended the guidelines for lipid management to provide examiners with additional information when high lipid levels are encountered.

▪    Etihad Airways arranged for all additional onboard crewmembers, particularly but not only all Loadmasters, to receive the training needed to be able to assist in a situation where a pilot or other crewmember is incapacitated with corresponding changes to the OM made.

The Final Report was issued on 25 September 2019. Based on the recorded Safety Action taken, no Safety Recommendations were considered necessary.