On 16 April 2014, a pre-flight concern about whether a Boeing 777-200ER about to depart Singapore had been overfuelled was resolved by a manual check but an en-route fuel system alert led to close monitoring of the fuel system. When a divergent discrepancy between the two independent fuel remaining sources became apparent, an uneventful precautionary air turnback was made and overfuelling subsequently confirmed. The Investigation found that a system fault had caused overfuelling and that the manual check carried out to confirm the actual fuel load had failed to detect it because it had been not been performed correctly.

On 16 April 2014, the crew of a Boeing 777-200ER (9V-SWC) being operated by Singapore Airlines on a flight from Singapore to Johannesburg at night and level at FL320 were presented with an EICAS fuel system annunciation which highlighted a discrepancy between the fuel remaining figure derived from fuel used assuming the departure fuel had been as indicated and the figure derived by directly measuring the fuel remaining in tanks. The crew had been assured prior to departure that despite evidence of an excessive fuel uplift, the required fuel load was onboard. When the difference in flight was observed to be increasing, a precautionary and uneventful return to Singapore was made and a manual check of fuel on board revealed that there had been a 41 tonne overload.

Since the CT had noted prior to the commencement of refuelling that the flight deck fuel quantity indicator reading had been around 5.5 tonnes, the dispenser-measured uplift of 121.5 tonnes of fuel would have resulted in a total fuel on board of about 127 tonnes, some 41 tonnes above the required figure of 86 tonnes. Having informed the flight crew about the fuel discrepancy, he consulted his supervisor and was instructed to carry out a manual fuel quantity check using the fuel measuring sticks, commonly referred to as ‘magnasticks’. He delegated the check to the Lead Technician (LT) who was also present and asked him to check only the centre fuel tank on the assumption that the wing tanks would be full anyway. The LT then performed the check using only the two magnasticks located on the left and right sides of the centre fuel tank which, when these readings were added to the content of the (correctly) presumed full wing tanks, the total corresponded to the required 86 tonnes. It was therefore presumed by the flight crew that fuel quantity figure based on the amount of uplifted fuel recorded by the refuelling dispenser was inaccurate and the flight departed.

One hour into the subsequent flight, an EICAS ‘FUEL DISAGREE’ message was annunciated indicating that the threshold (in this case calculated as having been 1.786 tonnes) for alerting the crew to a discrepancy between the fuel remaining calculated by the FMC based on fuel used deducted from the initial fuel load input and that derived from the direct measurement of the amount of fuel remaining in tanks had been reached. As the FMC calculated fuel figure was less than the figure measured by the Fuel Quantity Indicating System (FQIS) and both were sufficient to complete the intended flight, no immediate action was deemed necessary. However, when the difference between the two fuel remaining figures was observed to be increasing, suggesting that fuel use was greater than expected, it was decided after consulting Company Maintenance, to return to Singapore. This was achieved uneventfully and with no abnormal aircraft handling issues.

The Investigation considered the difference between the centre fuel tank of a 777-200 and that of a 777-200ER and noted that the former was much smaller, having a substantial dry bay volume within the confines of the centre tank which reduced its capacity by about 40.5 tonnes. It was noted that the FQIS computation of fuel remaining relies on sensors in the wing and centre tanks with 8 less sensors being required for the smaller 777-200 centre tank than for the larger 777-200ER tank. The aircraft fuel management system included a Program Switch Module (PSM) which consisted of a series of pin switches that would be preset at manufacture to correspond to the correct aircraft type variant and thereafter, the only periodic maintenance action was to confirm the correct switch pattern was set. The PSM pin switch pattern for the 777-200ER was different to that for the 777-200 because the Fuel Quantity Processing Unit (FQPU) needed to accept the inputs from the eight additional sensors in the 777-200ER centre tank.

A review by Boeing of the FQPU data after the event under investigation showed that it was operating in 777-200 mode instead of 777-200ER mode so that the readings from the eight extra centre tank sensors on the aircraft involved were not included in the fuel remaining figures computed by the FQIS which thus registered only 86 tonnes when the actual fuel quantity was 127 tonnes. However, when the PSM was inspected by Boeing, they found that it had the correct pin switch pattern for a B777-200ER and also noted that the FQIS had been operating normally prior to the incident flight and that no recent maintenance work had been carried out on the FQIS or the PSM. A detailed inspection and testing of the PSM did not find any electrical or mechanical fault and although there had been reports of previous FQIS faults attributable to problems with the FQPU, the PSM or poor connection between components, no such finding applied to the FQIS components on the incident aircraft.

The way in which the manual fuel load check had been carried out was reviewed. It was noted that the process involved allowing each ‘magnastick’ to free fall from its normally constrained position to its equilibrium position, which would result in it protruding below the external surface of the airframe, thus providing an indication of the fuel level at that location in a tank (see the first illustration below). The correct way to manually derive the centre fuel tank contents of a 777-200ER when its load was likely to be significant was to take readings from all four of its ‘magnasticks’, whereas the CT had instructed the LT to drop only the outer stick on each side of the tank. Somce the actual centre tank on the 777-200ER made use of all three sub compartments - the left, right and centre compartments - but the smaller centre tank on the 777-200 variant was achieved by making the centre compartment a dry bay, the level of a given amount of a 777-200ER would be lower than that for the same amount of fuel in a 777-200. Given that the FQIS had been found to have been operating as if it was computing fuel in a 777-200 with a dry bay, it had not included readings from the 8 sensors in the centre tank centre compartment thus under-recording the actual fuel load. The second illustration below shows this as an annotated graphic. 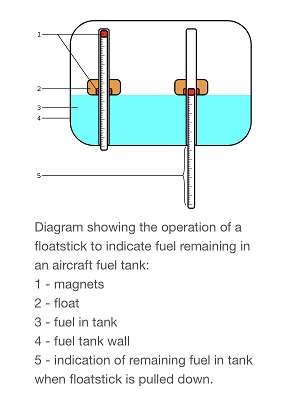 The operation of fuel measurement sticks. [Reproduced from the Official Report]

An explanation for the FQIS under-reading for a 777-200ER when the 8 centre tank sensors are not included in the fuel remaining computation because the 777-200 variant is ‘seen’. [Reproduced from the Official Report]

Finally, it was noted that the fact that the overfuelled aircraft was 41 tonnes heavier than the crew believed it was would have created a higher in-flight drag effect and thus the higher fuel consumption rate observed by the flight crew. The incorrect 86 tonne FQIS base reference, coupled with the higher fuel burn by the engines, would have caused the FMC to show a faster than expected reduction of the ‘calculated' fuel quantity remaining and thereby generated the increasing discrepancy between the FMC quantity remaining.

The overall Conclusions of the Investigation were as follows:

Safety Action taken during the conduct of and known to the Investigation included the following:

The Final Report of the Investigation was issued on 12 June 2018.