On 16 December 2014, a US-operated Boeing 777-200 encountered a significant period of severe clear air turbulence (CAT) which was unexpected by the flight crew when travelling eastbound over northern Japan at night between FL 270 and FL290. The decision to turn back to Tokyo to allow the nine seriously injured passengers and crew to be treated was made 90 minutes later. The Investigation concluded that the CAT encountered had been correctly forecasted but the Operator's dispatcher-based system for ensuring crew weather awareness was flawed in respect of international operations out of 'non hub' airports.

On 16 December 2014, a Boeing 777-200 (N751AN) being operated by American Airlines on a scheduled international passenger flight from Incheon, South Korea to Dallas Fort Worth as AA 280 was over Northern Japan at night when unexpected severe turbulence occurred. Serious injuries were sustained by one of the cabin crew and nine of the 240 passengers and two other members of the cabin crew and 8 passengers sustained minor injuries. Ninety minutes after the turbulence episode, the aircraft advised ATC that a turnback diversion to Tokyo Narita would be made and this was accomplished without further event.

An Investigation was carried out by the Japan Transport Safety Board. Data from the FDR were successfully downloaded in support of the Investigation but CVR data had been overwritten by the time the aircraft had completed its diversion.

It was noted that the 60 year-old Captain had accumulated 28,935 total flying hours including 4,408 on type and had recently completed his command training on type (approximately three months earlier). The First Officer had accumulated 6,173 flying total hours of which just 399 were on the B777 having completed his type conversion a little over an year earlier after flying in the same rank on the A320. An augmented flight crew was on board but they were not acting as either PF or PM at the time of the turbulence episode and their location on board at that time was not reported.

It was established that the flight had departed Incheon without the Captain giving the Cabin Crew any indication that there could be turbulence in the initial stages of the flight. On reaching the initial cruise altitude of FL 270, the Captain had made a PA advising that "there was no problem regarding the weather" along the intended flight and turned off the seatbelt signs. The cabin crew then began the usual in-flight service.

Then, just over an hour after take-off with the aircraft over northern Japan, the Captain reported having observed (with the AP and A/T engaged) a slight rearward movement of the thrust levers which he recognised as indicative of the potential onset of turbulence - see note 1 in the first illustration. He therefore turned the seat belt signs back on. At this time, it was reported that although thin cloud could be intermittently seen, the weather radar did not show any significant returns as set and so the Captain did not give instructions such as calling for attention in respect of the seat belt signs or instructing the cabin crew to take their seats. The cabin crew reported having confirmed the wearing of seatbelts and then continued with their in-flight service. Flight at FL 270 continued in stable conditions and with no significant returns on the weather radar for a further 15 minutes until the sudden onset of severe turbulence - see note 2 in the first illustration. The Captain reported immediately making a further PA to the cabin crew to be seated secured and reminded all passengers to remain seated with their seat belts on.

In an attempt to get clear of the turbulence, ATC were asked for clearance to climb and this was given to FL 340 and commenced immediately - note 3 in the first illustration. However, a second severe episode of turbulence occurred 2 minutes after the first - note 4 in the first illustration - and the severe turbulence then continued for a further 20 minutes. About an hour after the initial turbulence encounter, having climbed to FL350 (note 6), all abnormal turbulence ceased. The relationship between the positions marked by notes 1, 2 and 4 on the FDR extract above and the ground weather radar recording is shown below: 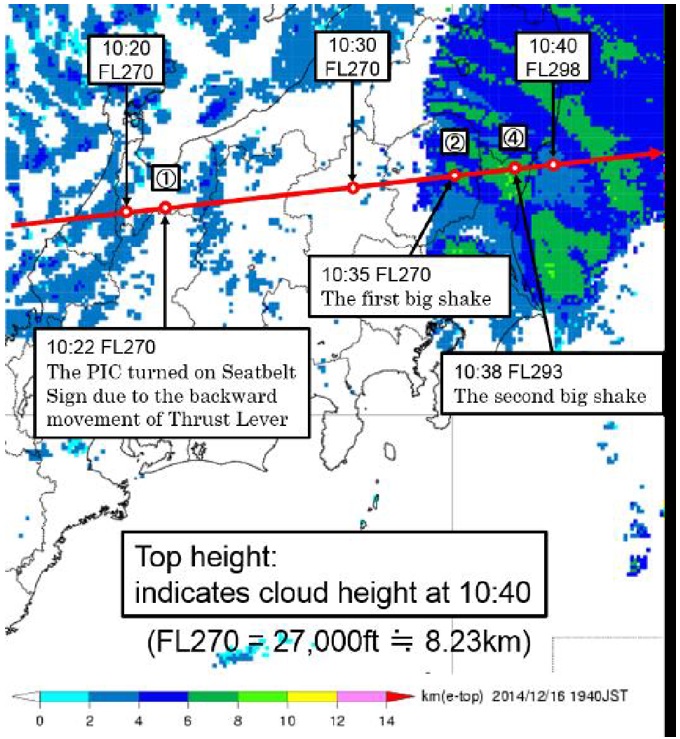 Cloud top heights in the area were noted to be "almost equivalent to the actual flight profile" and given the location of the aircraft in relation to two divergent Jetstreams during the period of severe turbulence (see the annotated SIG WX Chart below), it was considered that it was Jetstream-related CAT rather than of turbulence of convective origin.

The Captain contacted the airline head office about the possibility of airframe damage and a little over 90 minutes after the first episode of severe turbulence, it was decided to turn back to Tokyo, which was accomplished without further event. Despite recorded exposure to prolonged periods of severe turbulence in which recorded vertical accelerations varying rapidly within the range +1.8g and -0.88g, the aircraft was found to be undamaged.

The Investigation focussed on what relevant meteorological forecast information had been available and the extent to which this had been made available to the flight crew prior to departure from Incheon. This information was provided to American Airlines by a contracted supplier (Company A) and the part of the forecast provided to the crew at the pre-flight planning stage in relation to turbulence during the climb showed that conditions were expected to be smooth at an initial cruise level of FL270 with moderate turbulence likely during a climb to FL350 (where conditions were again expected to be smooth again) once past waypoint KMC (Komatsu). This recommended climb profile contained no indication of any relevant areas of severe turbulence at any time during the climb. However, 90 minutes before the take-off from Incheon, a SIGMET with immediate validity had been issued by the Japanese Meteorological Agency (JMA) for Severe Turbulence between FL280 and FL340 after waypoint GOC (Daigo) and 20 minutes after the aircraft got airborne, another JMA SIGMET with immediate validity was issued for Severe Turbulence between FL200 and FL 270 in the area where the flight was going to be level at FL270. The Flight Crew were not informed of either of these SIGMETs or another one issued by Company 'A' just after take-off which forecasted Moderate Turbulence in an area similar to that forecast for Severe Turbulence by the second JMA SIGMET which had already been issued. In the absence of this updated information, the Captain had no reason to commence climb from FL270 at the first indication of turbulence and after continuing at the same level until the first severe turbulence episode had begun, he then completed the whole climb to FL350 within airspace which was the subject of the first of the two JMA SIGMETs referred to above.

The way in which Dispatchers presented en-route forecast information to American Airlines flight crews prior to flight and flight crews’ ability to access additional information was found to differ between departures from Company 'hub' airports and all others in a way that made crew awareness less effective. The absence of any update to the in-flight aircraft by data communication was also noted. This situation was considered to have contributed considerably to the risk of exposure to the severe turbulence encountered.

Safety Action was taken by American Airlines as a result of the investigated event to "strengthen the Internet environment in order to enable the flight crew members to acquire necessary weather information with portable terminals in all airports which the Company flies into in the same manner as (at) hub airports”.

The Investigation determined that the Probable Cause of the Accident was that "the aircraft was fiercely shaken because it unexpectedly penetrated airspace with CAT, causing serious injury to a passenger and one of the cabin crew". It was also concluded that "the unexpected penetration into airspace with CAT (occurred) because the Captain and the Dispatcher did not predict the occurrence of the CAT which could interfere with the flight, on account of the method for acquisition of weather information used by American Airlines".

The Final Report was completed on 31 March 2016. No Safety Recommendations were made.