On 23 September 2017, a large wing-to-body fairing panel confirmed to have dropped from a Boeing 777-200 passing over the centre of Osaka after takeoff off from Kansai hit and significantly damaged a moving vehicle. The Investigation found that the panel involved had a sufficient history of attachment bracket failures for Boeing to have developed an improved thicker bracket for new-build aircraft which had then been advised as available as a replacement for in-service 777-200 aircraft in a Service Letter which KLM had decided not to follow. Although some incorrect bracket attachment bolts were found, this was not considered contributory.

On 23 September 2017, the crew of a Boeing 777-200 (PH-BQC) being operated by KLM on a scheduled international passenger flight from Kansai to Amsterdam as KL868 which had earlier passed over the city of Osaka in day VMC was advised that a large panel bearing evidence of a KLM paint scheme had fallen from the sky and hit a car being driven along a city street there. The panel was subsequently confirmed as likely to be from the aircraft and its crew were advised accordingly, but after checks showed no system abnormalities, they decided to complete the flight and subsequently did so without further event. Although the vehicle which had been hit sustained significant impact damage from the metre square panel, no occupant injury occurred.

The damaged vehicle after recovery from the impact site. [Reproduced from the Official Report]

It was established that after the aircraft had flown over the central part of the city of Osaka just under 20 minutes after taking off from Kansai, reports were received that a large panel in KLM colours had fallen from the sky and hit a vehicle being driven along a city street. The location of this collision was about 1½ nm south east of the aircraft track. Examination of the recovered panel established that despite its size - it was approximately 1.07 metres x 1.08 metres - it only weighed 4.3 kg because it had a honeycomb sandwich structure made of glass reinforced plastic (GRP).

A map of Osaka and surrounds showing the aircraft ground track after takeoff from Kansai and the location (in red) where the panel hit the vehicle. [Reproduced from the Official Report]

Later in the day, KLM in Amsterdam were sent a photograph of the detached panel and their Operations Control Centre contacted flight KL867 to advise its crew that it had probably come from their aircraft. After running some system checks which showed nothing was malfunctioning, the flight was completed uneventfully as planned. The panel, identified as 198AR, the right aft wing-to-body fairing, was found to be missing from the aircraft when it arrived in Amsterdam.

It was noted that the detached panel was supposed to have been secured to the aircraft with seven screws and thirty bolts and, in and the panel’s forward upper corner where limited space between the fuselage precluded the use of fasteners, by attachment to a supporting bracket. This bracket also allowed that corner of the panel to be mounted under a preload so that when fitted, it would lay fully flush with the adjacent panels. It was evident that this supporting bracket had failed under stress but it was stated that no sign of anything untoward in its vicinity had been noted during the pre flight external inspection carried out by a qualified ground engineer. It was found that routine maintenance procedures required the 198R panel to be periodically removed to allow visual inspection of the aircraft structure and that this had last been done in 2015. The collective findings led to the conclusion that the released panel had not been re-fitted flush with the fuselage because the bracket had become distorted creating a gap between the forward upper corner of the panel and the fuselage which had allowed air to flow in behind the panel. The fact that a protective film had begun to peel off the inboard side of the forward upper corner of the support panel was considered to be evidence for such an airflow. Marks indicating fatigue fracture were left on the broken bracket’s fracture surfaces and it was considered probable that this fracture had been initiated by airflow inside the panel that was in addition to the load caused by ordinary aerodynamic force from outside. This airflow would then have placed an excessive load on both the bracket and the bolts and eventually created a repetitive bending stress on the support bracket flanges and finally to the observed fatigue fracture. Once the bracket had failed, an even larger gap would have formed between the forward upper corner of the support panel and the fuselage allowing the pressure of inflowing air and increasing vibration to liberate the panel.

Examination disclosed that all seven of the securing screws were still attached to the aircraft side of the panel (the heads of two of them were broken) and all but one of the bolts were also still attached, 26 on the aircraft side and 3 on the panel side. A cross check of the bolt part numbers with the IPC found that five of the 29 recovered bolts were slightly longer than the specified ones and had been wrongly used, three in positions close to the support bracket in the forward upper corner of the panel. The effect of using a longer bolt was observed to be that when torqued, its grip length relative to thread length is reduced so that the panel may be less securely attached to the surrounding structure. This issue was carefully considered to assess whether it had been contributory to the detachment of the panel. However, it was concluded that, in view of the limited number of incorrect bolts involved, the absence of any signs of airflow behind the panel assembly in their immediate vicinity and the knowledge that similarly incorrect bolts had not been used to secure other support brackets which had been found to be cracked, it was unlikely to have been a factor in the release of the panel in the event under investigation. It was nevertheless observed that their use would be capable of contributing to panel release in different circumstances so it was considered “desirable that the Operator review its maintenance procedures for procedural compliance and parts management” and takes steps to ensure that the installation of incorrect panel bolts does not occur.

It was discovered that the aircraft type had a sufficient history of failed support brackets to have caused Boeing to redesign the original part to create a more robust alternative (see the illustration below). This much thicker “enhanced” bracket design had been introduced on the new aircraft production line but only offered in optional SB form to some of the potentially affected in-service aircraft, all -300 variants. In the case of KLMs 16-strong -200 fleet, the only communication from Boeing on the subject which did apply was in the form of a Service Letter issued in 2009 which, under KLM practices then prevalent did not, in the absence of any bracket failures on their aircraft, trigger any action. 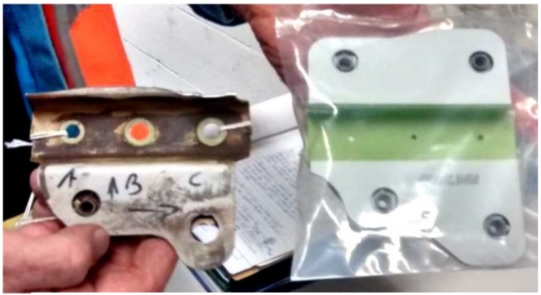 The Cause of the investigated Serious Incident was formally determined to have been that “it occurred when the departed right aft wing-to-body fairing panel struck and damaged a moving vehicle while the aircraft was climbing and passing over the city of Osaka after takeoff”. It was additionally determined in respect of the separation of the panel from the aircraft that it was “highly probable that the bracket that secured the panel’s forward upper corner by holding it to the airframe structure broke, a gap was created between the panel’s forward upper corner and the fuselage allowing the panel to separate due to the pressure of inflowing air and vibration”.

Safety Action taken as a result of this event and known to the Investigation was noted as having included but not been limited to the following:

The Final Report was adopted by the JTSB on 26 October 2018 and published on 29 November 2018. No Safety Recommendations were made.