On 19 December 2013, the left engine of a Boeing 777-200 taxiing onto its assigned parking gate after arrival at Singapore ingested an empty cargo container resulting in damage to the engine which was serious enough to require its subsequent removal and replacement. The Investigation found that the aircraft docking guidance system had been in use despite the presence of the ingested container and other obstructions within the clearly marked 'equipment restraint area' of the gate involved. The corresponding ground handling procedures were found to be deficient as were those for ensuring general ramp awareness of a 'live' gate.

On 19 December 2013, a Boeing 777-200 (9V-SRP) being operated by Singapore Airlines in a scheduled passenger flight from Mumbai to Singapore ingested an empty cargo container into the left engine as it taxied onto the designated arrival gate at Terminal 2 at Singapore with normal daylight visibility. The engine sustained serious damage and had to be replaced. No persons on the aircraft or on the ground were injured.

It was established that the ingested container and two attached baggage trailers had been wholly within the designated Equipment Restraint Area (ERA) of the designated arrival gate F37 at the time the gate entry guidance system had been switched on by the ground service provider personnel covering the arrival of the accident aircraft. They were located just clear of the red hatched area marking the extent of the Passenger Loading Bridge (PLB) safety zone. 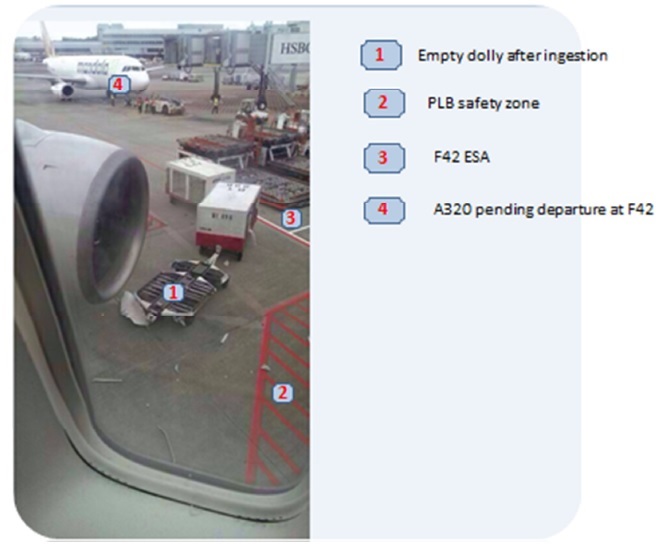 It was also noted that the commander of the arriving aircraft had observed that the aircraft docking guidance system was not switched on as the gate area was approached and had stopped the aircraft prior to gate entry for approximately 20 seconds until it was.

It was found that the Ground Service Provider's arrival crew - two technicians - had arrived at the gate about 25 minutes prior to the expected arrival of the aircraft. The technician in charge of the crew was a 'Certifying Technician' (CT) and the other technician was a 'Lead Technician' (LT) under training to himself qualify as a CT. Whilst the CT checked the correct function of the PLB, the LT "inspected the ERA to ensure that it was clear of obstructions and equipment" They then waited below the PLB for the aircraft to arrive and no further inspection of the area was carried out as it was not required by procedures. About 15 minutes prior to the actual arrival of the aircraft, another CT joined the arrival crew and was assigned to act as the chock bearer.

Meanwhile, an A330 was due to arrive at the adjacent gate F42 shortly after the 777 had arrived on F37. An Equipment Operator (EO) from different Ground Service Provider arrived driving a tractor towing two baggage containers which, on seeing that the ESA for gate F42 was already full, he then left just within the ESA of gate F37, returning few minutes later to attach an empty cargo container on a dolly to the two baggage trailers so that all three trailers were within the F37 ESA. The EO then waited for an A320 to depart from gate F42, expecting that when it did, some of the handling equipment serving the A320 would be moved which would release some ESA space. However, with the A320 still on the gate after about 10 minutes, he decided to try and rearrange equipment in the gate F36 ESA to make room for his trailers in the gate F42 ESA. Just as the aircraft docking guidance system had been activated and the 777 was proceeding into gate F37, he left the area, leaving the baggage trailers and the cargo container behind.

The LT acting as chock bearer walked slowly towards the approaching aircraft and "only then … noticed the cargo container and baggage trailers". He reported having called out to the technician in charge who was operating the PLB to try to get him to stop the aircraft using the guidance system but the noise of the engine drowned out his voice and the cargo container had been sucked into the left engine before the aircraft reached the stop line.

The Investigation noted that the aircraft commander, although he had not announced verbally that the left side of the gate area was clear, reported that "he had done a visual sweep of the area from his position and did not notice any obstructions". In order to understand what the chances of pilots detecting obstructions on a gate area which they would not expect if the aircraft docking guidance system was 'live', the Investigation team set up a simulation on the gate concerned using a towed 777 aircraft. This exercise (see the picture below) led to the conclusion that "it was not easy to judge" whether the cargo container and the two baggage trailers would have been in the ERA or not, although "one could infer, from the fact that the PLB safety zone could not be seen", that the cargo container and the baggage trailers were in the ERA because they were partially obscuring the marked PLB safety zone and the wheels of the airbridge. 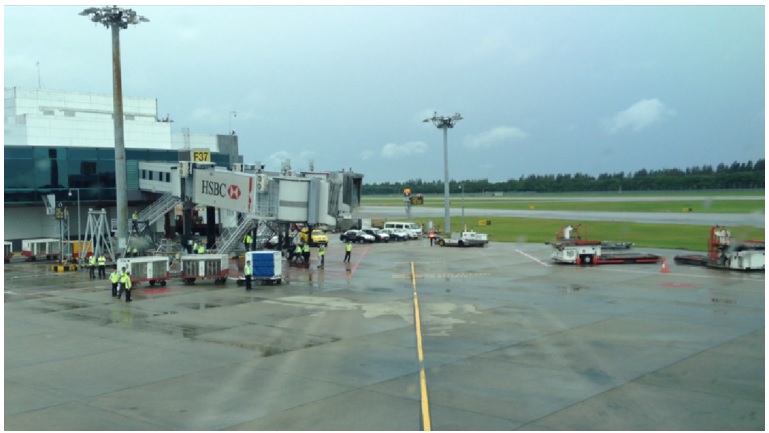 The Conclusion of the Investigation was that the ingestion incident was the result of the incorrect positioning of the cargo container/dolly and the baggage trailers in the ERA and:

It was noted that in the light of the findings of the Investigation, "it may be useful for flight crews to check for tell-tale signs that might suggest an abnormal situation in the ERA, for example, when the hatched lines of the PLB safety zone or the wheels of the aerobridge are not visible".

Safety Action taken by the Aerodrome Operator whilst the Investigation was in progress was recorded as including the following:

Also, the Aviation Regulatory Authority found that "there was no one organisation or person who was overall in-charge and responsible for the various ground handling activities conducted by multiple parties at the bay" and has since required that the aerodrome operator "to ensure that there is an overall person-in-charge of the operations at the bay for each arrival flight so as to ensure that the operations are carried out safely at the bay".

The Final Report of the Investigation was published on 30 July 2015.