On 26 September 2009, the crew of a British Airways Boeing 777-200 unintentionally began and completed their take off in good daylight visibility from the wrong intermediate runway position with less than the required take off distance available. Due to the abnormally low weight of the aircraft compared to almost all other departures by this fleet, the aircraft nevertheless became airborne just before the end if the runway. The investigation attributed the error to a poorly marked taxiway and the failure of the crew to include the expected taxi routing in their pre flight briefing.

On 26 September 2009, a Boeing 777-200 being operated by British Airways on a scheduled day passenger flight from St Kitts to Antigua unintentionally began and completed take off from a different intermediate position on the departure runway than the one intended in normal ground visibility and just succeeded in becoming airborne before the end of the paved surface was reached. There was no damage to the aircraft and no injury to the 101 occupants.

The UK AAIB was informed of the Incident by the Operator on 29 September 2009 and subsequently notified the Eastern Caribbean CAA, which is the designated Regulator for aviation in States and Territories which belong to the Organisation of Eastern Caribbean States (OECS). The conduct of the Investigation was then delegated to the UK AAIB.

It was noted that the Operator had begun a new service to St Kitts in January 2009 and that this was the first time either of the incident flight crew had operated to or from there. The Operator’s New Destination Assessment was found to have been completed by reference to the AIP, commercially available charts and NOTAMS and had led to the production of a flight crew Route Brief which did not contain a warning about the lack of taxiway and holding point signage because the Operator was unaware of this having made no site visit prior to the service commencing.

The Investigation established the sequence of actions leading up to the take off. The flight crew had obtained Runway 07 takeoff performance data for both the full length and from Intersection Alpha and subsequently agreed that Intersection Alpha would be acceptable and would avoid the need to backtrack. After ATC clearance to “taxi via Alpha and backtrack Runway 07, taxiway Alpha is parallel the active” the aircraft, with the First Officer as PF left the ramp, where there were no taxi guidance markings, and upon sighting a taxiway centreline at the edge of the ramp ahead the First Officer “assumed”, in the absence of signage, that it was leading onto taxiway Alpha”. The aircraft continued on this taxiway to Holding Point Bravo and after a short delay waiting for the ‘cabin secure’ report, ATC were advised that the aircraft was ready for departure and gave line up and departure clearance. 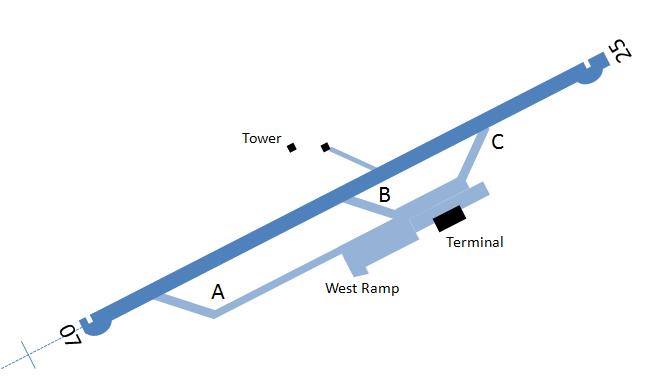 Schematic of runway and taxiway layout at St Kitts

Once the aircraft had entered the Runway and begun to turn towards the direction of take off, ATC inquired slightly hesitantly whether a backtrack was required and the response was “err negative Speedbird 2156 we are happy to go from position Alpha” after which take off clearance was given. With the aircraft stopped, the Commander stated that the runway looked very short and advised the First Officer to “stand on the brakes” and apply 55% N1 before brake release, which he did.

The Operator’s Station Engineer and Airport Duty Manager were passengers and realised that the aircraft was going to attempt take off from the wrong intersection. One of them ran up to the Cabin Manager seated by Door 1L and asked if she had contacted the flight crew. She assumed he was referring to the cabin secure notification and said yes. He then said he needed to contact the flight crew immediately as “we are in the wrong position” but on hearing the engine power increase towards takeoff thrust and realising that the takeoff run was starting, he then sat down in the nearest available seat.

As the aircraft accelerated, the flight crew noticed that the end of the runway was approaching. V1 was achieved as the aircraft reached the TDZ aiming point markers for the opposite direction and rotation was commenced with the aircraft lifting off shortly afterwards. QAR data which had been routinely downloaded by the Operator broadly confirmed this airborne position and showed that the aircraft had passed over the end of the paved surface at a recorded radio height of 80 feet.

It was noted that the Operator did not authorise Intersection Bravo departures for Boeing 777 takeoffs on from Runway 07 at St Kitts and that the aircraft had taken off with a TORA of 1220 m whereas the performance calculations had been based on a TORA of 1915 m.

It was established that there was no taxiway or holding point signage anywhere on the aerodrome, this fact was not published in AIPs and that St Kitts and Nevis, an ICAO Contracting State, had not filed any differences to Annex 14 with ICAO. It was also found that after an aerodrome inspection at St Kitts in 2006, which had been carried out on behalf of the Eastern Caribbean CAA by a specialist contractor, the Authority had not taken appropriate action to ensure that the findings were acted upon in a timely manner and that the Aircraft Operator was unaware of the existence of the Report.

ATC service during the departure of the incident aircraft was found to have been provided by a trainee controller under supervision. It was noted that neither the trainee Controller nor his supervisor had advised the flight crew that they were at Intersection Bravo rather than Intersection Alpha, to which they had been cleared. It was also noted that there was no formal means of incident reporting at St Kitts ATC.

The Investigation concluded that the flight crew had misidentified Taxiway Bravo for Taxiway Alpha and departed from Intersection Bravo after failing to include the expected taxi routing in their briefing.

The Final Report of the Investigation was published on 2 September 2010.