On 5 July 2015, as a Boeing 777-300ER was departing Melbourne, two Boeing 737-800s which were initially on short final for intersecting runways with their ground separation dependent on one receiving a LAHSO clearance, went around. When both approaching aircraft did so, there was a loss of safe terrain clearance, safe separation and wake vortex separation between the three aircraft. The Investigation attributed the event to the actions of an inadequately supervised trainee controller and inappropriate intervention by a supervisory controller. It also identified a systemic safety issue generated by permitting LAHSO at night and a further flaw affecting the risk of all LAHSO at Melbourne.

An Investigation was carried out by the Australian Transport Safety Bureau (ATSB). It was established that the TWR position was being occupied by a trainee controller accompanied by an OJTI who had held a Melbourne Aerodrome Control Rating for 6½ years. A ‘Tower Coordinator’ was also present - he had held a Melbourne Aerodrome Control Rating since 1996 - as was another controller tasked with Ground Movement Control and Clearance Delivery.

The trainee controller instructed the 777 to line up on runway 34 following discussion with her OJTI. At this time, the two 737s were on approach, one for runway 34 and one for the shorter runway 27. Both were about 5 nm from the threshold of their respective runways with Land and Hold Short Operations in use. About 30 seconds later, as the 777 continued to taxi towards the runway, it was cleared for an immediate take-off and, after making a 90° turn to line up on the full length of the runway, commenced its take-off.

This manoeuvre took longer than the trainee controller and her OJTI had expected and as the 777 began its take-off roll, the 737 on approach to land on the intersecting runway 27 had about 2½ nm to go and the 737 on approach to land on runway 34 had less than 2 nm. The trainee tower controller requested the flight crew of the 737 approaching runway 27 to reduce to minimum speed and its crew responded that they already were at that speed. Her OJTI then told the trainee to tell the crew that in the event of a missed approach, they should expedite climb to 4,000 ft as there was traffic departing runway 34. In response the 737 crew, descending through approximately 900 feet, announced that they were going around. Meanwhile, the other 737 was passing 800 feet on approach to runway 34.

At this point the Tower Coordinator “expressed concern” that the departing 777 was still on runway 34 and that the required runway separation standard would not be maintained against the approaching 737. After he had “received what he deemed an unsatisfactory response from the tower OJTI” he then instructed the trainee controller to instruct the 737 on final to runway 34 to go around. As she did this, a runway 34 occupancy caution activated because the 737 was less than 15 seconds from the threshold. This caution almost immediately changed to a warning which is triggered when an aircraft is less than 10 seconds from the threshold. The 777 was still less than half way along the runway and the 737 going around from runway 27 was less than 1 nm from the 27 threshold and climbing through 1,100 feet. The trainee controller, intending to advise the flight crew of the 737 she had just instructed to go around from runway 34 that another 737 was currently going around from runway 27, transmitted instead traffic information that another 737 was going around from runway 34. 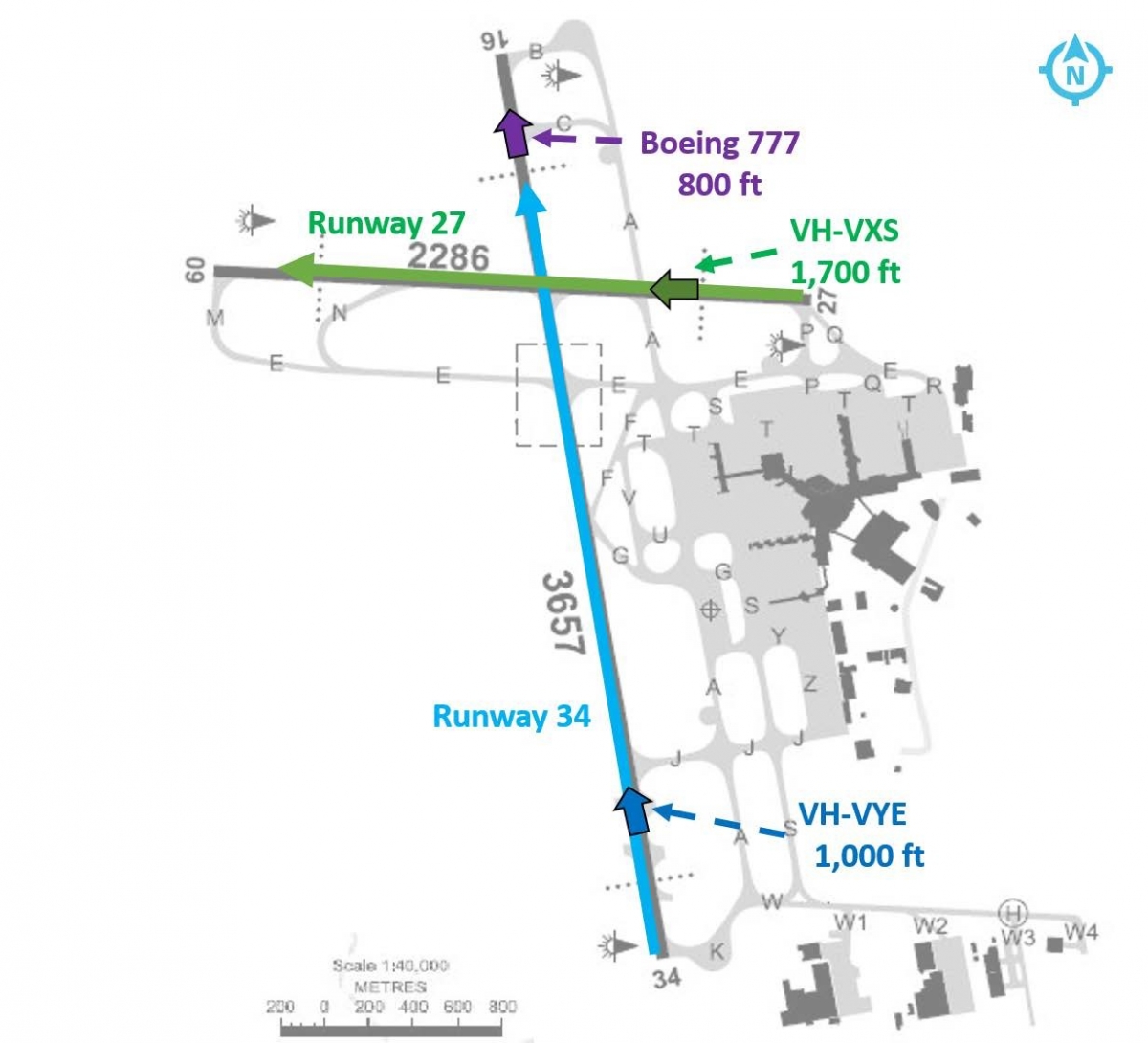 The relative positions of the three aircraft as the 737 ground tracks were about to cross. [Reproduced from the Official Report]

Subsequently, all aircraft were “tracking well clear of each other” on divergent flight paths. The 777 continued en-route and the two 737s were then re-sequenced to land at Melbourne without further event. It was noted that at no time had traffic information been provided to the 777 in respect of either of the 737s. Surveillance data was subsequently examined and showed that separation between the two 737s had reduced to about 0.9 nm and 900 feet as the one going around from runway 27 had crossed runway 34 in front of the one going around from that runway. It was noted that responsibility for maintaining separation lay with the TWR controller and the only available standard was visual separation which, because of “the limitations of human vision at night and the disposition and trajectory of traffic at the time” could not be assured. It was also found that although the 737 sent around from its approach to runway 34 did not fly through the flight path of the departing 777, it was only 1½ nm behind it instead of the applicable wake turbulence separation minimum of 5 nm.

A number of aspects of the event and its context were examined during the Investigation, including the following: The runway 34 threshold area. [Reproduced from the Official Report]

Two Other Factors that increased risk were also identified:

Safety Action taken by ANSP Airservices Australia as a result of the investigated occurrence whilst the Investigation was in progress was recorded as having included the following:

The Final Report was released on 6 August 2018. No Safety Recommendations were made.