On 24 June 2018, a Boeing 777-300 was briefly subjected to unexpected and severe Clear Air Turbulence (CAT) whilst level at FL300 which resulted in a serious injury to one of the cabin crew as they cleared up after in-flight service. The Investigation concluded that the turbulence had occurred because of the proximity of the aircraft to a strong jet stream and that the forecast available at pre-flight briefing had underestimated the strength of the associated vertical wind shear.

On 24 June 2018, the crew of a Boeing 777-300 (JA8944) being operated by Japan Airlines on a scheduled domestic passenger flight from New Chitose to Tokyo International as JAL 514 in day VMC encountered unexpected severe turbulence without warning when cruising at FL 300 and one of the cabin attendants fell and sustained a serious injury. A descent to a lower level was made after the event and there was no recurrence as the flight was completed as planned.

The event was classified as a Serious Incident and an Investigation was carried out by the Japan Transport Safety Board (JTSB). It was noted that the 47 year-old Captain of the aircraft, who was PF for the flight, had a total of 10,475 flying hours all but 438 hours of this being on type. The 48 year-old First Officer had a total of 9,373 flying hours which included 2,769 hours on type.

It was established that during the pre-flight briefing, the flight crew had reviewed the meteorological situation and forecast (see below) in relation to the flight planned route and noted that at one point, vertical wind shear was forecast with a change in wind speed of six to nine knots over a 1000 feet altitude difference close to the intended FL300 cruising level and that there was expected to be a southward-moving jet stream centred at FL370 of up to 150 knots in the same area. Because PIREP turbulence reports along the FPL route in the previous hour had mentioned only “light” turbulence, the flight crew presumed that although turbulence might occur when the flight reached the VWS area, it would, at least initially, be weak which would allow them to descend to a lower level to continue en route. They also advised the cabin crew of the probability of light turbulence as well as the possibility of the sudden onset of more significant turbulence beginning around 50 minutes after takeoff. 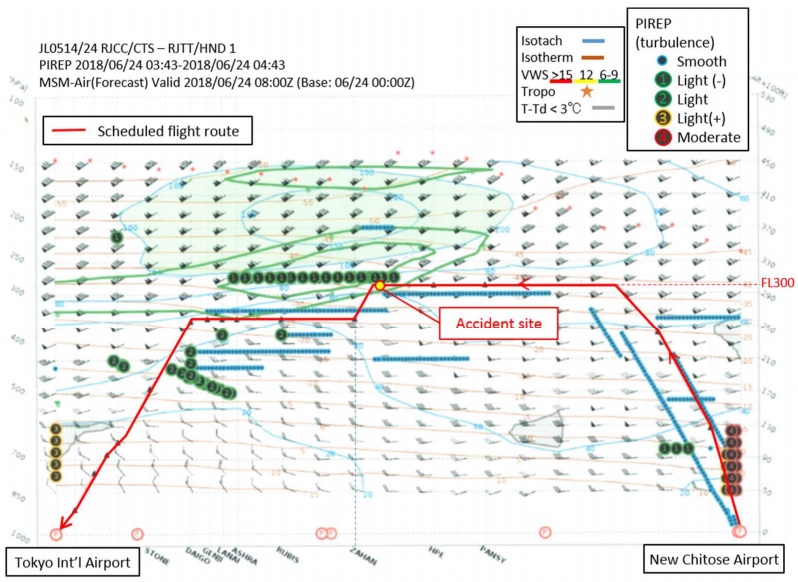 During the climb after take-off, the seat belt sign was turned off and the cabin crew began the in-flight service. Soon after reaching the planned cruise level of FL330, the Captain temporarily transferred PF duties to the First Officer in order to prepare for his landing briefing. Soon after this, around 35 minutes after takeoff and about half way through the flight, came the sudden occurrence of a few seconds of “relatively fierce” turbulence and a request for descent was made to ATC. When this initial turbulence occurred, one of the cabin crew who was carrying a tray in the right hand aisle close to the aft galley was about to grasp the armrest of the nearest passenger seat as recommended but when a second much worse turbulence of a few seconds occurred about 15 seconds after the first, they were unable to do so and after being lifted off the floor, fell down and sustained what was subsequently found to be a fractured ankle.

FDR data showed that the recorded vertical acceleration during this second turbulent episode, which lasted approximately three seconds, had increased very quickly from +0.82g to +1.50g and then decreased to 0.31g before increasing again to 1.71g. In the absence of any visible or weather radar indications of turbulence, the seat belt signs had been off although they were then immediately turned on. After descending as cleared to FL260 to resume the cruise, the remainder of the flight was completed without further event.

A review of the actual weather conditions in the area where the turbulence which led to the injury had occurred showed that a cold front was approaching from the northwest and a vertical cross section of the flight track at the time of the occurrence (see below) indicated that there had been a jet stream with a maximum speed of around 150 knots centred at FL370. 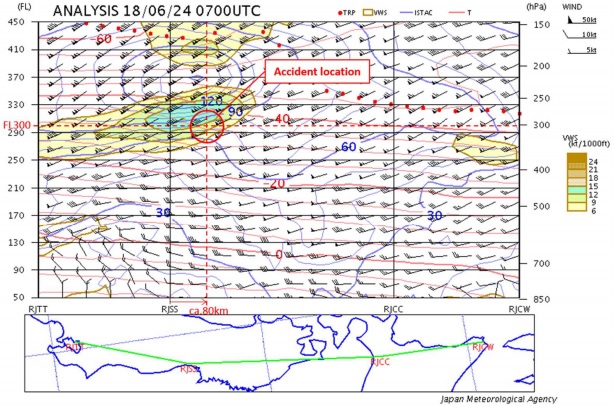 A vertical cross section along the flight track at the time of the turbulence encounter showing wind velocity and isopleths of vertical wind shear per 1000 feet (turquoise = 12-15 knots). [Reproduced from the Official Report]

It was concluded on the available evidence that the clear air turbulence encountered had occurred whilst the aircraft “was passing through the side edge of the jet stream” and that the associated vertical wind shear had increased in strength compared to that forecast in the pre-flight briefing.

The Probable Cause of the investigated Serious Incident was formally determined as the encounter by the aircraft with clear air turbulence while it was passing through the side edge of a jet stream which led to such sudden and severe flight path disturbance that a cabin attendant who was in the aisle towards the rear of the aircraft fell and was injured. The precise origin of the clear air turbulence was probably the existence of a region of vertical wind shear on the flight route of the aircraft which was stronger than that contained in the forecast consulted prior to commencing the flight.

Safety Action taken by Japan Airlines as a result of this event and known to the Investigation was noted as having included but not been limited to the following:

The Final Report was adopted by the JTSB on 30 August 2019 and published on 26 September 2019. No Safety Recommendations were made.