On 13 January 2016 ice was found on the upper and lower wing surfaces of a Boeing 777-300ER about to depart in the late morning from Lisbon in CAVOK conditions and 10°C. As Lisbon had no de-ice facilities, it was towed to a location where the sun would melt the ice more quickly but during poorly-planned manoeuvring, one of the wingtips was damaged by contact with an obstruction. The Investigation attributed the ice which led to the problematic re-positioning to the operator’s policy of tankering most of the return fuel on the overnight inbound flight where it had become cold-soaked.

On 13 January 2016, a Boeing 777-300ER (D2-TEI) being operated by TAAG (Angolan Airlines) on a scheduled international passenger flight from Lisbon to Luanda was fully boarded and ready to depart when an external inspection by the Captain found ice on both the upper and lower wing surfaces which rendered the aircraft unable to depart so the aircraft was towed to a ramp where there was greater exposure to the sun during which manoeuvre the underside of the right side wingtip hit a jet blast deflector. None of the 278 occupants were injured. 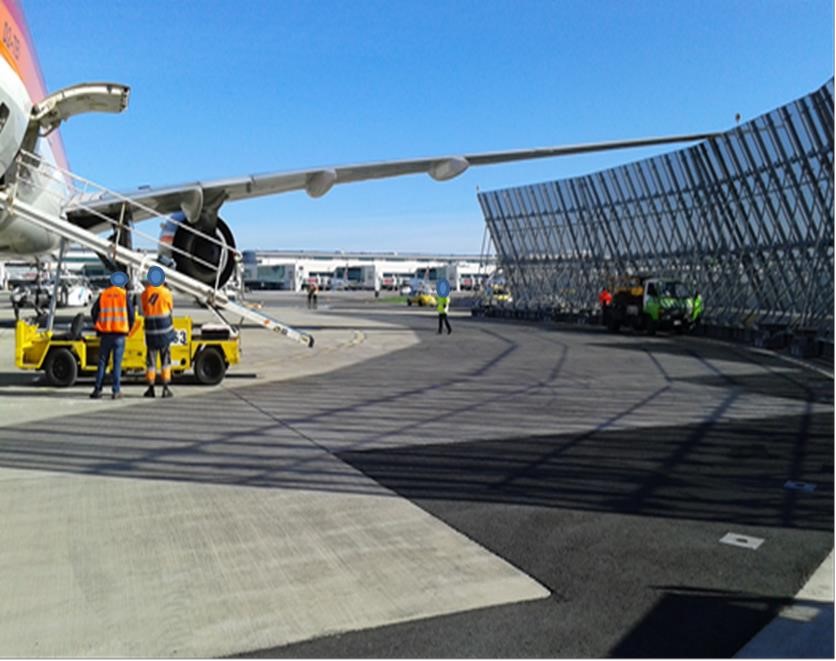 The aircraft wing in contact with the blast deflector at the edge of the Multi Purpose Ramp. [Reproduced from the Official Report]

The event was notified to the Portuguese Accident Investigation Agency (the GPIAA) which carried out an Investigation. It was noted that the aircraft was a Class E type for which ICAO Annex 14 prescribes a minimum of 3.75 metres between an aircraft on any part of a designated stand and any object as long as all obstacles are clear of the engine ingestion danger area. The ramp where the collision occurred was approved for engine ground running or the parking of aircraft up to Class E and was equipped with a perimeter blast deflector.

It was established that the decision to tow the aircraft to the Multi Purpose Ramp (MPR) was taken to minimise the delay to the departure following the Captain’s finding of ice on the upper and lower surfaces of both wings during his pre flight external inspection. It was also a consequence of the fact that the airport had only 8 parking stands which could accommodate class E aircraft and all were either already occupied or were required for inbound aircraft of this class so that the potential difficulty of moving the loaded in-service aircraft to the MPR was accepted - although the risk of doing so was not fully recognised.

The tug performing the task was preceded by an airport operator ‘Follow Me’ vehicle and the allocated aircraft dispatcher and the route followed is indicated below. A wing walker was neither required nor requested. On arrival at the MPR, the aircraft was towed in nose first and then a 180° turn was performed during which the outer part of the right wing was observed to be over, but clear of, the blast deflector at the perimeter of the ramp. It was determined that towing equipment with greater manoeuvrability was required and it was decided to change to a towbarless tractor instead of the one which had initially been used. However, during this changeover, the nose gear was raised and the weight supported by the main landing gear consequentially increased which compressed its shock absorbers and thereby reduced the clearance of the outer wing over the blast deflector and as the manoeuvre re-commenced using the towbarless tractor, the wing came into contact with it and marked the lower wing with a 22 cm scratch and the operation was stopped. To raise the damaged wing clear of the blast deflector, all passengers were disembarked and all cargo offloaded but it was still necessary to also add additional nitrogen to the right main gear shock absorber to move the wing clear. It was considered that “the exchange of towing equipment proved to be not the right decision” since not only was the overhanging wing clearance reduced, the front axis of the towbarless tractor was in very close proximity to the rail on which the jet blast deflector ‘halves’ can be moved and by moving in this direction it passed over them which caused “an oscillation of the aircraft” during which the lower wing surface contacted the blast deflector. It was also observed that the initial offloading of passengers and the holds after the collision was considered to have been inappropriate because the effect was that the wing dropped further onto the blast deflector. The damage caused was minor and was subsequently assessed as being within SRM limits. 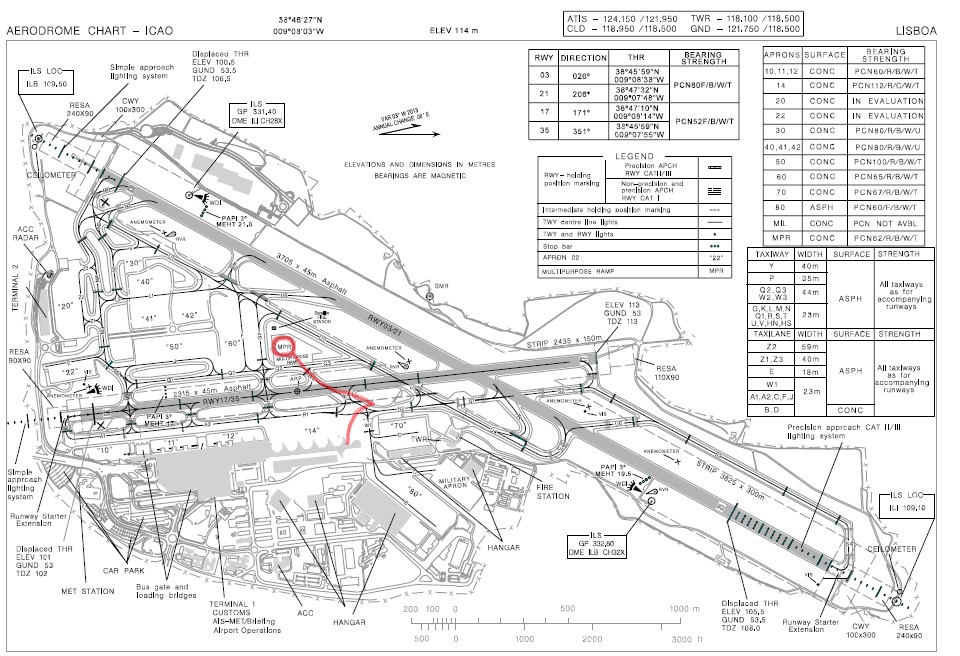 The taxi route from the boarding stand 146 to the Multipurpose Ramp (MPR). [Reproduced from the Official Report]

The initial mis-positioning of the aircraft on the MPR was found to have occurred in the presence of inadequate instructions given by the Airport Operations Service to the driver of the ‘Follow-Me’ vehicle which led the tug into the MPR. This had resulted in the driver using his discretion to effectively direct the manoeuvre there on arrival. During the 180° turn of the aircraft, the driver had to abandon his vehicle in order to coordinate the operation with no contact with either ATC or Airport Operations in the absence of a portable radio. It was also found that the surface of the MPR was uneven and that this had “contributed to the vertical distance between the lower wing surface and the blast deflector not being uniform”.

Given that Lisbon Airport did not provide aircraft de/anti icing, the Investigation examined the circumstances which led to airframe ice being present at the time of departure. It was found that the aircraft had arrived earlier in the morning from Luanda after a 7 hour overnight flight for a scheduled four hour turnround and a return departure at 1000 hours local time. The TAAG Airlines policy was to tanker fuel into Lisbon to the extent operationally practicable and since a return flight from Luanda to Lisbon typically required around 65,000 kg of fuel against a total tank capacity of 145,500 kg and even if the traffic load northbound was high, most of this fuel could be carried from Luanda without any risk of exceeding the MLW. The effect of this was that after a relatively small fuel uplift in Lisbon - 9,600 kg on this occasion and typically in the range 6000 - 15000 kg - the majority of fuel in the wings was always ‘cold-soaked’ from the northbound flight and received little conductive heating from mixing with the uploaded fuel. At the time of the aircraft’s arrival, it was found that there was 69,100 Litres (55,500 kg) of fuel in the two wing tanks with an approximate temperature of - 16°C and with mist present at the airport and fog in the vicinity, the temperature and dew point were both 7°C. By the time the Captain found frozen deposits on the wings five hours later, the mist and fog had cleared but the temperature had only risen to 10°C just 1° above the dew point. It was concluded that the formation of ice on the aircraft’s wings during the turnround had been a direct consequence of TAAG Airlines’ fuel tankering policy and the relatively low surface temperature, high humidity and the low level of solar radiation.

The formally-documented Findings of the Investigation included the following:

The combination of Causes which led to the event were determined to have been as follows:

The Final Report of the Investigation was published on 24 June 2016.