On 3 November 2011, a Boeing 777-300ER crew lost directional control of their aircraft soon after touchdown and after veering off one side of runway 08R, it then crossed to the other side of it before stopping. The Investigation found that during the final stages of an intended autoland in CAT 1 conditions, an ILS LLZ signal disturbance caused by a departing aircraft had led a flight path deviation just before touchdown and, after delaying a pre-briefed automatic go-around until this was inhibited by main gear runway contact, the crew failed to either set thrust manually or disconnect the autopilot.

On 3 November 2011, a Boeing 777-300ER (9V-SWQ) being operated by Singapore Airlines on a scheduled international passenger flight from Manchester to Munich veered off destination runway 08R shortly after touchdown and had then, after crossing back over the runway and off the other side, eventually stopped on the adjacent grass. The aircraft was undamaged apart from some grass and soil on the exterior of the right engine and the landing gear and the 162 uninjured occupants were able to disembark from the aircraft to buses using mobile steps brought to the aircraft. 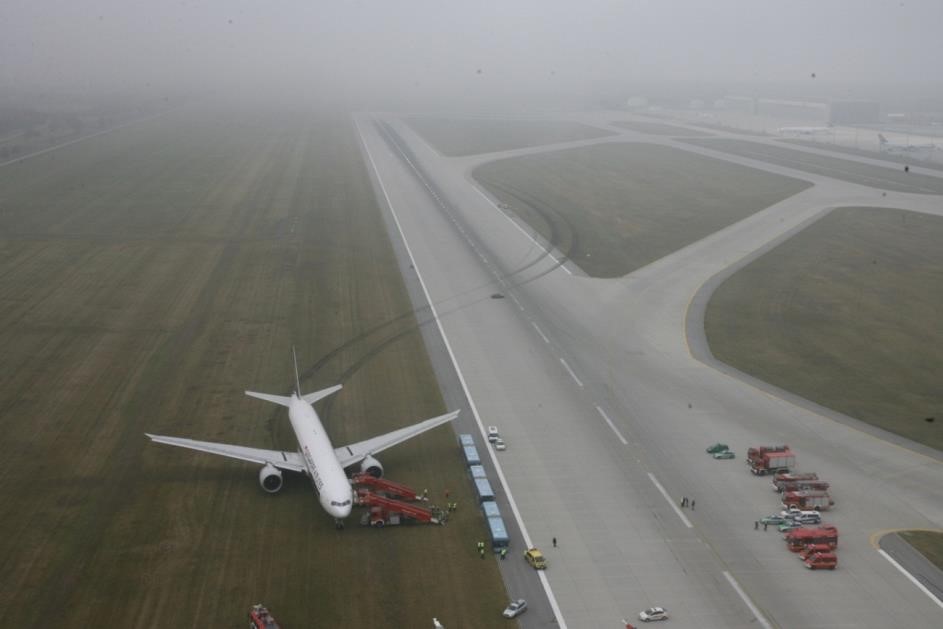 The aircraft in its finally stopped position south of the runway. [Reproduced from the Official Report]

The excursion occurred on the second sector of a two sector flight duty for the crew who had earlier operated from Munich to Manchester after a 48 hour rest period following their operation of a flight from Singapore to Munich. The flight to Manchester occurred without incident. On the subsequent return flight to Munich, the First Officer initially acted as PF but on hearing the latest Munich weather which included a 300 feet cloud base and 2,000 metres visibility, the Captain decided to take over as PF in accordance with Company SOPs.

Earlier, Munich had been in fog with visibilities between 600 and 900 metres with LVPs in force to protect ILS CAT 3 approaches which were available on all runways, but with the lifting of the fog, ATC had ceased LVP and returned to Cat 1 traffic separation in an effort to catch up. The crew were aware of this but the Captain briefed for an ILS CAT 3 automatic approach to runway 08R followed by an autoland. After working Munich APP, the flight was transferred to Munich Director where they received clearance for an ILS approach to runway 08R. Transfer to Munich TWR was accompanied by an instruction to reduce speed to 170 knots. Munich TWR cleared the flight to land and gave the spot wind as from 130° at 7 knots.

With the aircraft 50 feet agl and in the flare to land, it slowly began to bank left up to 3.5°. Touchdown on the left MLG first occurred approximately 420 metres past the threshold at 132 KCAS and was followed by the right MLG three seconds later. At the point the first MLG runway contact occurred, the Auto Flight System (AFS) switched, as per design, to rollout mode. The AP remained engaged as the aircraft moved towards the north side of the runway and continued onto the grass near the taxiway B4 intersection after which it followed a slightly curved right hand turn for about 400 metres and reaching a maximum deviation from the runway when it was about 1,240 metres beyond the threshold and at a recorded speed of 109 KCAS.

The AP disconnected as a result of crew inputs to the rudder pedals to achieve the continuation of the right turn back towards the runway and the aircraft completed a turn though about 40° before re-entering the runway just before the taxiway B6 intersection about 1,566 metres beyond the threshold. It continued across the runway on a heading of about 120° with the airspeed still around 70 KCAS before departing from the southern runway edge onto grass before then turning left about 40° and coming to a stop parallel to the runway about 35 seconds after touchdown. The Captain decided that there was no need to evacuate and after about two minutes, airport RFFS vehicles arrived at the scene.

Although FDR data showed no indication that a go around had been initiated, as the aircraft had touched down, the CVR recorded the Captain as saying “okay flaps 20” and several concurrent sounds which indicated the clicking of the TO/GA buttons on the thrust levers and movement of the speed brake handle. This corresponded to the time when the Captain reported trying to command a go around using the TO/GA buttons and retracting the speed brakes which had been automatically deployed on touchdown.

The ground track of the aircraft once it began to deviate from the runway centreline. [Reproduced from the Official Report]

It was quickly noted that an automatic go around initiated by pressing the thrust lever TO/GA buttons is no longer possible once at least one of the aircraft MLGs has touched down because the automatic go around mode is deactivated at that point. A rejected landing after touchdown on the 777 requires the thrust levers to be manually advanced to the TO/GA position in order to set the thrust. However, deactivation of the go around mode does not also disconnect the AP since for a CAT 3 approach the cues it receives from the LLZ signal in rollout mode are used to ensure that rudder and nosewheel inputs keep the aircraft on the centreline once it has landed. It required rudder inputs at the pressure which would accompany a runway exit at taxi speed once the automatically-controlled landing roll was complete.

These two features of the aircraft automation explained why the intended go around could not be attempted and why directional control once on the ground was problematic. The cause of the unexpected left bank during the flare which had begun the sequence was found by examination of surface movement radar to have been a transient obstruction of the LLZ signal by a departing Avro RJ85 which became airborne near to the end of the same runway just as the 777 was in the flare. This aircraft had begun its takeoff from an intermediate intersection and having just become airborne was climbing at a relatively slow rate.

Exclusively CAT 2/3 operations had been maintained until about 70 minutes prior to the 777 touching down but, at the time of the approach and for at least the previous 45 minutes, both the cloud base and the prevailing visibility for 08R met the criteria for CAT 1 operations. This meant that special procedures to prevent transient LLZ signal interference were no longer required and ATC had therefore returned to CAT 1 traffic separation procedures in order to recover the backlog in movements which had resulted from the earlier period of LVP.

The airline’s FCTM was found to include reference to the risk of ILS LLZ signal interference if automatic approaches and landings were conducted under CAT 1 conditions. It also included the following text:

“Flight crews must remember that the ILS critical areas are not protected when the weather is above 800 foot ceiling and /or 2 mile visibility. As a result, ILS beam bends may occur because of vehicle or aircraft interference. Sudden and unexpected flight control movements may occur at a very low altitude or during the landing and rollout when the autopilot attempts to follow the beam bends. At ILS facilities where critical areas are not protected, flight crews should be alert for this possibility and guard the flight controls (control wheel, rudder pedals and thrust levers) throughout automatic approaches and landings. Be prepared to disengage the autopilot and manually land or go-around".

In addition the airline’s FCOM was found to “recommend an autoland where the cloud base is 500 feet aal or less, or visibility is 2000 metres or less, or at any time RVRs are being given”.

Since the FDR and CVR sonogram data indicated that the thrust lever TO/GA button had been pressed at the same time as initial main gear ground contact had occurred, it was concluded that the crew had expected that this action would cause the go-around mode to initiate an automatic go around. Such an expectation was contrary to the system logic since the go around mode was no longer active. Had the Captain, as required, pushed the thrust levers forward to set TO/GA thrust, automatically deployed ground spoilers would have been automatically retracted and the autobrake function would have been de-activated. It was noted that the Captain had realised that the ground spoilers had already been deployed automatically and had retracted them manually which would not have been necessary had the initially intended go-around been correctly initiated.

The Investigation considered that both pilots, the Captain as a Training Captain and the First Officer having significant flying experience on type, had been “sufficiently familiar with the (correct) go-around procedure” which was in any case “sufficiently described in the FCTM and had been sufficiently trained in the simulator in accordance with regulatory requirements”.

It was found that the airline made use of two different manufacturer’s full flight simulators for training. Both of these simulator types were found to meet all Boeing requirements and both used the same system logic to activate on-ground sensing as in the aircraft, although there was a very slight difference in exactly when ‘on-ground’ was sensed after either of the main gear assemblies made ground contact.

Although LVPs were no longer in force and traffic separation had reverted to CAT 1 requirements, at the time of the approach and landing under investigation, other CAT 2/3 provisions had not yet been suspended. It was observed that had the crew advised the controller about their planned autoland, it would have been possible to return to CAT 3 traffic separation “with relatively little effort” since it would only have involved keeping the departing RJ85 at the intermediate CAT 2/3 holding point where it was waiting for takeoff clearance.

The TWR controller involved stated that as the attempt was made to get flight operations back on schedule after the delays which had built up in the earlier period of CAT 2/3 LVP, he “had been under a high workload” due to mixed mode use of the runway which had involved him accommodating an increased departure rate achieved at times by making full use of CAT 1 SOPs which allowed the separation between departing and approaching aircraft to be not less than “one runway length”.

The fact that there were no international regulations covering what was accepted as the routine conduct of autoland in conditions less than those required for the implementation of LVPs (particularly the lack of protection of the ILS LLZ signal) was highlighted as a matter of concern. In this respect, the Investigation came to the conclusion that “if an airport does not operate on LVP, it should become a global standard to inform air traffic control in good time about an intended autoland landing”.

The Causes of the Serious Incident were formally documented as follows:

Safety Action taken by Singapore Airlines in response to the occurrence and known to the Investigation was recorded as having included:

The Final Report of the Investigation was published on 17 December 2018. No Safety Recommendations were made.