On 28 July 2013, with passengers still boarding an Air France Boeing 777-300, an abnormal 'burnt' smell was detected by the crew and then thin smoke appeared in the cabin. A MAYDAY was declared and the Captain made a PA telling the cabin crew to evacuate the passengers via the doors, only via the doors. The resulting evacuation process was confused but eventually completed. The Investigation attributed the confused evacuation to the way it had been ordered and established that a fault in the APU had caused the smoke and fumes which had the potential to be toxic.

On 28 July 2013, a Boeing 777-300 (F-GSQA) being operated by Air France and nearing departure on a scheduled passenger flight from Paris CDG to Shanghai at night was evacuated following a MAYDAY declaration due to smoke and fumes in the cabin whilst boarding was largely complete at the time with two air bridges still attached. One of the 298 passengers on board sustained a serious injury.

An Investigation was carried out by the French BEA.

It was established that passenger boarding had commenced via air bridges connected to doors 1G and 2G (see diagram below) approximately 20 minutes after the crew had arrived at the aircraft. In line with normal procedures, the emergency evacuation slides at the doors not being used for passenger boarding were not armed and at least one member of the cabin crew was present at each of pair of opposite doors. Approximately 15 minutes after boarding had commenced, the three pilots in the flight deck (Captain, operating Co-pilot and relief Co-pilot) reported detecting a ‘‘burnt’’ smell and the Captain and the relief Co-pilot left the flight deck to look for the source of the smell. Soon afterwards, the cabin crew member at door 3D/G contacted the flight deck and reported to the remaining pilot that there was "a smell of sulphur in the area of door 5", adding that passengers at the rear of the cabin seemed worried and were asking questions about the origin of the smell. An Engine Indicating and Crew Alerting System (EICAS) annunciation of SMOKE in the forward crew rest quarters appeared and this message also appeared on the Cabin Management System Control Panel.

The Captain had noted that the smell and a thin smoke haze was present in the passenger cabin and asked for the ovens in the galleys to be checked. At the request of the Captain, the cabin crew at the front of the aeroplane donned protective breathing equipment and entered the forward crew rest quarters with a fire extinguisher, however he found thick smoke but no signs of fire. On return to the flight deck, the Captain decided to order an evacuation of the aircraft and in preparation made a PA instructing the cabin crew to go to their stations whilst the Co-pilot made a MAYDAY call to ATC requesting AFS attendance.

Detecting "the onset of panic" the Chief Flight Attendant made a PA asking passengers to remain in their seats. Cabin crew at doors 3 and 4 armed the evacuation slides and those at doors 3G, 4 and 5 explained to relevant passengers their role as facilitators in the event of an evacuation. The Ramp Area Manager then contacted the crew and reported that smoke seemed to be coming from the APU which prompted the crew to shut it down. Then, forty-five seconds after his initial PA, the Captain made a further PA "Cabin crew this is the cockpit, evacuate the passengers via the doors, only via the doors". 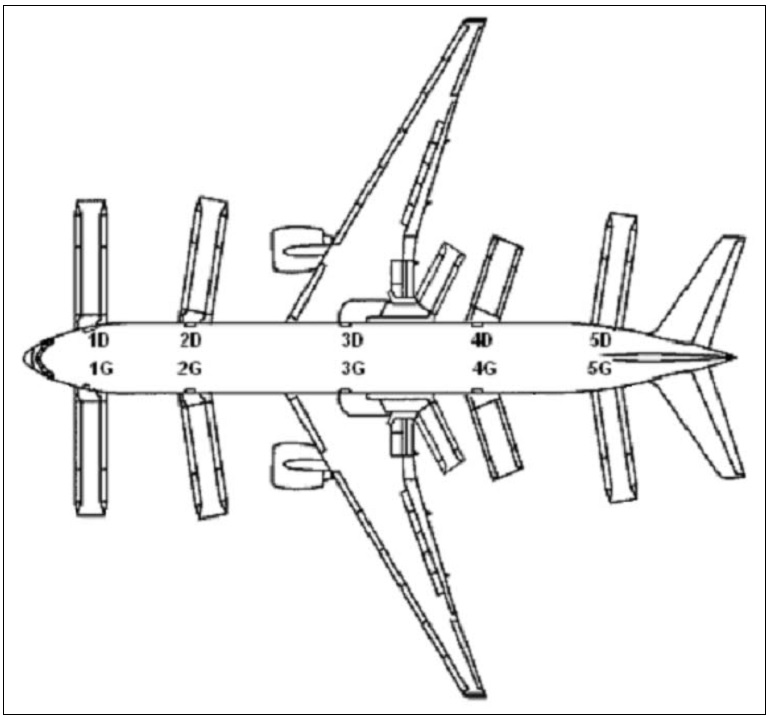 In the cabin, a cloud of thick smoke had formed under the cabin ceiling and was moving from the rear of the cabin towards the front. The evacuation began with the cabin crew ordering the passengers to leave quickly. The interpretation of the Captain's PA reference to "doors" led to confusion which was exacerbated by passengers' concerns. A number of doors which had not been used for boarding were opened and slides deployed, including doors 3G/D from which passengers exited onto the wings. The relief Co-pilot noted the opening of doors 3G/D and the Captain entered the cabin and asked those passengers who were still on the wings to return inside the cabin. Passengers who had evacuated via slides were assisted by ground personnel and taken to the terminal; one of the passengers sustained a major injury during the evacuation.

Once all the passengers were off the aircraft, and with the smoke having dissipated, the Chief Flight Attendant went to the flight deck and a review of the evacuation was held with the flight crew.

In respect of the Captain's use of the PA to communicate with all his cabin crew in order to prepare for and commence the evacuation, the Investigation noted that the crew interphone on the Boeing 773 allows a general emergency call to be made to all cabin crew.

The Investigation concluded that lessons could be learned in respect of the following areas:

The fact that the Captain and one of the two Co-pilots left the flight deck to investigate the origin of the suspicious smell was not conducive to effective management of the developing situation by the Captain. Had the investigated event occurred when airborne, it was considered that the Captain would have probably remained on the flight deck. "Nevertheless this single event does not make it possible to reach a conclusion on the strategy to adopt in all the emergency situations which may arise on the ground and in flight".

The Air France Operations Manual did not provide for an evacuation of the aircraft by the boarding doors only. The PA made by the Captain was open to various interpretations. Other Operators do have such a procedure, which removes doubt as to what process will be followed.

On the basis of "technical considerations and human factors relating to the activity of mechanics", Air France had decided to use an oil for APU lubrication which might generate toxic gases if heated to an abnormal temperature. It might be reasonable to also consider the potential consequences for aircraft occupants "in the framework of a safety study".

Crew members were "exposed to smoke that may have been toxic" yet most did not make use of the protective equipment they had available. It was considered that "when in doubt, the crew members must wear suitable protection to ensure their duty of safety".

The origin of the fumes and smoke was found to be the failure, for undetermined reasons, of a bearing in the APU which resulted in the loss of integrity of an oil seal associated with it and allowing its lubricating oil to pass into the compressor. Since the APU was, as usual, providing cabin air conditioning prior to engine start the fumes/haze were distributed around both the flight deck and passenger cabin. It was noted that the Mobil Jet Oil II used for lubrication in the APU was the same as that used for the engines and that whilst this oil is capable of releasing toxic substances if a higher than normal temperature is reached, no evidence that this had occurred was found. However, it was further noted that an alternative lubricating oil to the one used is available which, when heated above normal temperatures, does not release the predominant toxin found in the oil in use. "However the Operator had decided not to use this oil, to ensure that it was not erroneously put into the engines, for which it is not certified".

Safety Action taken by Air France was noted to have 'defined' six 'corrective actions' in the following matters:

The Causes of the event were formally documented as follows:

The Final Report of the Investigation was published in English in July 2015. No Safety Recommendations were issued.