On 27 May 2016, a Boeing 777-300 crew made a high speed rejected take off when departing from Tokyo after a number one engine failure warning was quickly followed by a fire warning for the same engine and ATC advice of fire visible. As the fire warning continued with the aircraft stopped, an emergency evacuation was ordered. The Investigation found that the engine failure and fire had occurred when the 1st stage disc of the High Pressure Turbine had suddenly failed as result of undetected fatigue cracking which had propagated from an undetected disc manufacturing fault.

On 27 May 2016, the crew of a PW4090-engined Boeing 777-300 (HL7534) being operated by Korean Air Lines on a scheduled international passenger flight from Tokyo to Seoul as HL 2708 rejected takeoff on runway 34R because of a left engine fire warning and an emergency evacuation followed. Of the 319 occupants, 40 sustained minor injuries during the evacuation. Debris was ejected from the failed engine but none of it penetrated the fuselage.

An Investigation was carried out by the Japan Transport Safety Board (JTSB). Relevant data was recovered from the FDR, the 2 hour CVR and the QAR and useful airport video footage was also available.

It was established that the aircraft had begun its takeoff after entering runway 34R from taxiway C1 and after 30 seconds of normal acceleration, number one engine NI had begun to drop and an engine malfunction warning was annunciated. A rejected takeoff was immediately commenced by the Captain at 119 KCAS in accordance with Company Standard Operating Procedures (SOPs) for operation of the thrust levers during takeoff and two seconds later, as TWR reported an engine fire visible, a fire warning for the same engine followed. The aircraft came to a stop sixteen seconds after the thrust levers had been retarded. The Captain made a PA instructing “crew at stations” and when the First Officer could not immediately locate his copy of the QRH, the Captain commenced the memory actions for the number one engine fire by shutting it down and activated the first extinguisher shot. Although the fire warning went out, it reappeared 2 minutes and 20 seconds after the first shot had been used and the second shot was activated.

Soon after this, and almost three minutes after the aircraft had come to a stop, the first two of five fire engines arrived at the aircraft. The fire warning again ceased after the second shot had been used but this time it reappeared after just over a minute and the Captain advised ATC that an emergency evacuation would be made on the right hand side and after a further 1 minute and 37 seconds confirmed that it was in progress. Video evidence showed that the first exits - L1 and R1 - had been opened a full half minute before the number two engine had been shut down and that exits R2, R3, R4 and R5 had also been opened prior to this engine being shut down. However, the first passengers did not leave the aircraft until just after this engine had been shut down. Since the engine fire was clearly visible on the left side, the L1 exit was not used.

Normal slide deployment occurred at 4 of the 6 exits opened but at R4 and R5, deployment to a useable position did not occur and only in the case of R4 did it subsequently reposition and become useable. With four exits in use, it was 3 minutes and 47 seconds from the time the L1 door had been opened before the last of the 302 passengers left the aircraft and the remaining crew members followed. The cabin crew reported that despite clear and repeated instructions to the contrary, “many passengers evacuated with their carry-on baggage”. In the absence of any persons assisting at the bottom of the deployed slides, fire-fighters moved to assist at the R1, R2 and R4 slides but there were none to assist at the R3 slide. It was reported that “after the evacuation, the passengers were shooting pictures near the aircraft and making telephone calls and did not respond to the guidance or instructions given by the fire-fighters” and many were carrying their baggage, some of it described as “large suitcases”. 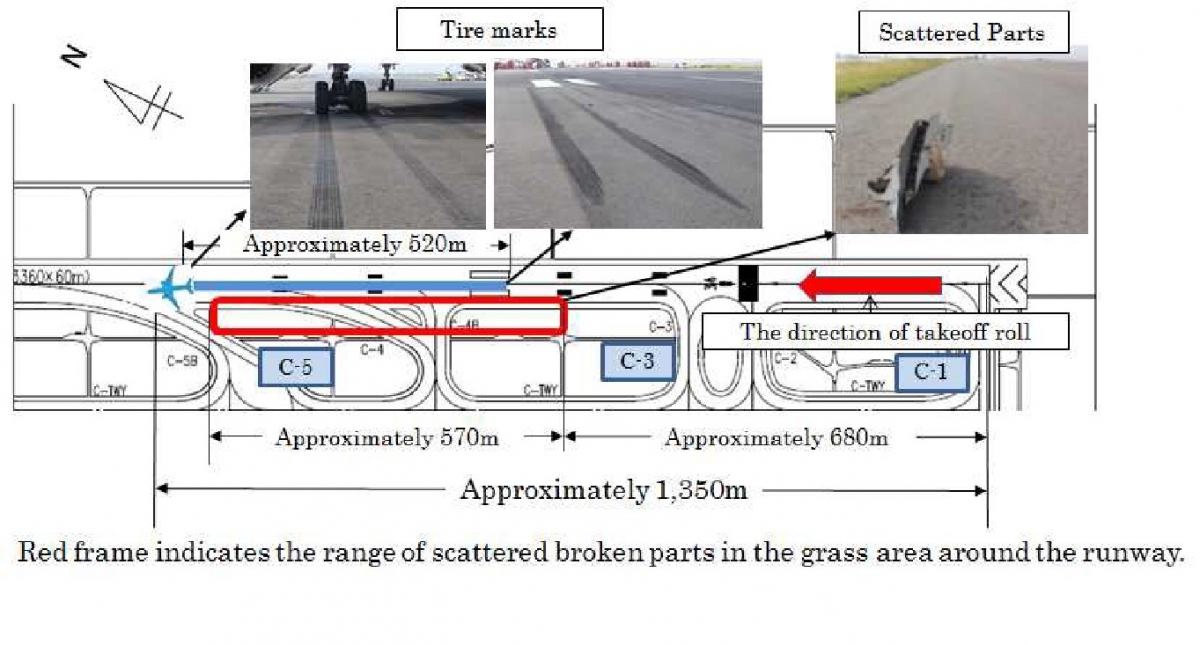 The stopping position of the aircraft showing the area in which engine debris was found and deceleration tyre marks on the runway. [Reproduced from the Official Report]

The failure of the R5 slide to deploy useably (see the illustration below) was attributed to a combination of the effects of the prevailing northerly wind averaging almost 40 knots and the 20 knot airflow created by the efflux from the number 2 engine which was still running at ground idle when the slide was deployed. However, as the tip of the slide had caught fast on the runway surface, the subsequent removal of the engine efflux component of the overall airflow was not enough to enable it to return to a normally-deployed position. 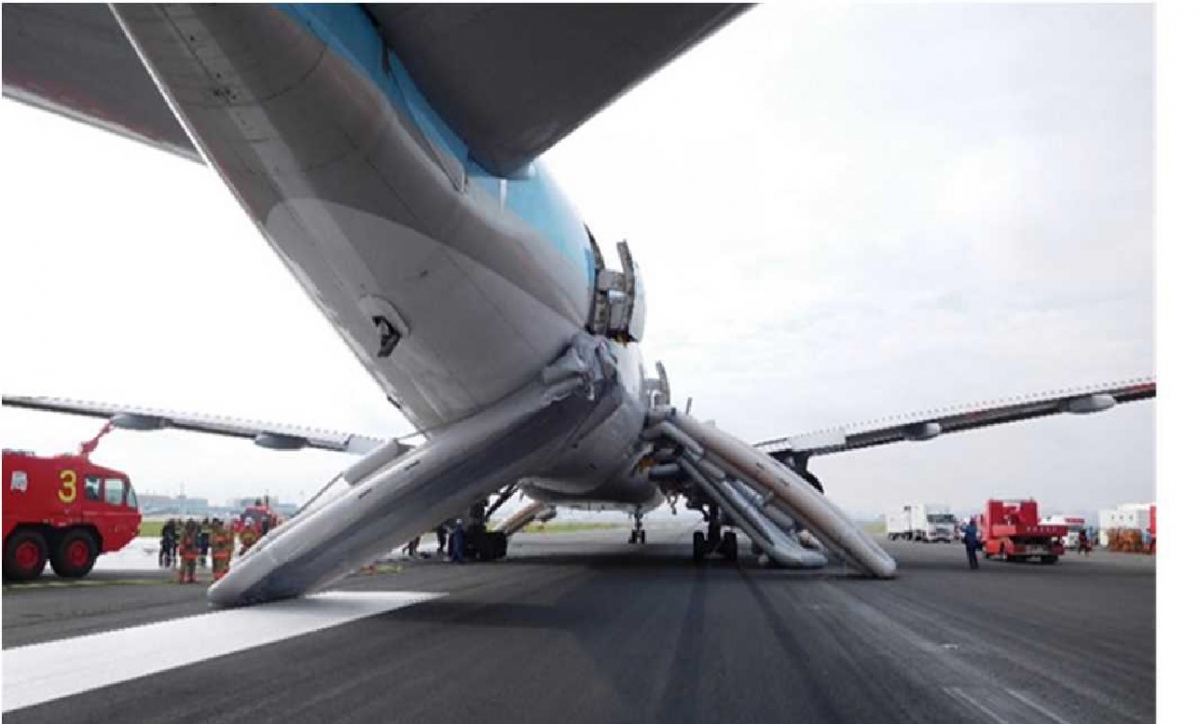 The aircraft after completion of the evacuation showing the twisted R5 slide. [Reproduced from the Official Report]

A detailed investigation as to the cause of the engine failure was made and its origin was eventually traced to a manufacturing fault at engine build which had escaped detection and then become the source of fatigue crack propagation in the disc which itself had then gone undetected by NDT during scheduled maintenance until the accumulation of flight cycles was sufficient to trigger a catastrophic failure.

The fire which began in the engine after it failed during the takeoff was attributed to a combination of effects of impact forces generated by the release of the fragment from the ruptured rim part of the 1st stage High Pressure Turbine disc through the engine case and the engine rundown loads generated when the engine stopped suddenly which caused cracks to developed in the Fuel Oil Heat Exchanger, which enabled fuel and engine oil to leak out and come into contact with the hot area of the engine casing where ignition occurred.

The reappearance of the flight deck engine fire warning was attributed to a breach in the inner wall of the left translating cowl which compromised the effectiveness of the fire extinguishers.

The Investigation formally documented the Probable Causes of the accident as follows:

NOTE - The above text on ‘Probable Causes’ has been completely reworded because of the loss of clarity in the translation of the Official Report into the English Language.

Safety Action taken as a result of the findings of the Investigation prior to their publication were recorded as having included but not been limited to the following:

The Final Report was adopted by the JTSB on 6 July 2018 and published on 26 July 2018. No Safety Recommendations were made.