On 24 July 2011, a Thai Airways International Boeing 777-300 descended below the safe altitude on a night non-precision approach being flown at Melbourne and then failed to commence the go around instructed by ATC because of this until the instruction had been repeated. The Investigation concluded that the aircraft commander monitoring the automatic approach flown by the First Officer had probably experienced automation surprise in respect of the effects of an unexpected FMS mode change and had thereafter failed to monitor the descent of the aircraft with a selected FMS mode which was not normally used for approach.

On 24 July 2011, a Boeing 777-300 being operated by Thai Airways International on a scheduled passenger flight from Bangkok to Melbourne descended so far below the vertical profile for the night non precision approach procedure being flown in Visual Meteorological Conditions (VMC) at destination that ATC, observing that the aircraft was below the minimum safe altitude for the range from touchdown, instructed the aircraft to fly a go around. However, despite acknowledgement, this instruction only resulted in the descent being arrested and the go around did not commence until a further instruction to do so was given nearly a minute later. The subsequent approach using the same procedure was uneventful.

An Investigation was carried out by the Australian Transport Safety Bureau (ATSB). It was established that the aircraft had been on a VOR/LOC approach to runway 34 (see procedure plate below) with the First Officer as PF and the AP engaged.

It was established that the aircraft had been cleared to descend to 3000 feet Altimeter Pressure Settings. Passing about 3,300 feet QNH, the AFDS had automatically changed from vertical navigation (VNAV) speed (SPD) mode to VNAV path (PTH) mode in recognition of the FMC altitude limitation of 3,000 feet, this being the runway 34 VOR initial approach altitude. As the aircraft was at this point 440 feet below the FMC-calculated vertical profile, the AFDS had commanded a pitch-up to regain this profile. Although this was in full accordance with the normal function of the automation engaged, the aircraft commander advised the Investigation that “he had not observed this type of AFDS behaviour before” and had therefore led him to believe that the VNAV mode was malfunctioning. In response, he had changed the MCP altitude to 2,000 ft and selected FLCH mode. The Investigation considered that these actions “were symptomatic of ‘automation surprise’ on (his) part, probably due to a lack of AFDS mode appreciation”.

In response, the MCP altitude was reset to 2000 feet and then, following the selection of the FMC Mode to FLCH to ensure that descent continued, briefly back to 3000 feet before this was replaced by 970 feet, the MDA being used for the approach. This latter figure was higher than the MDA published on the approach chart because of a combination of Notice To Airmen advice that it was temporarily raised to 920 feet and because, according to the Operator, the pilots would have added approximately 50 feet to the MDA due to a requirement associated with flying a Constant Angle Non-Precision Approach (CANPA).

With the target airspeed set to 190 knots and Flaps 1 selected, the autothrottle (A/T) reduced engine thrust to Flight Idle and the aircraft intercepted the inbound procedure track. Upon being advised that the crew had the airfield in sight, the TWR controller cleared the aircraft for a visual approach subject to it being “... established on the PAPI and inside the circling area”. It was noted that the latter condition would have been satisfied once within 5.3 nm of the runway threshold. 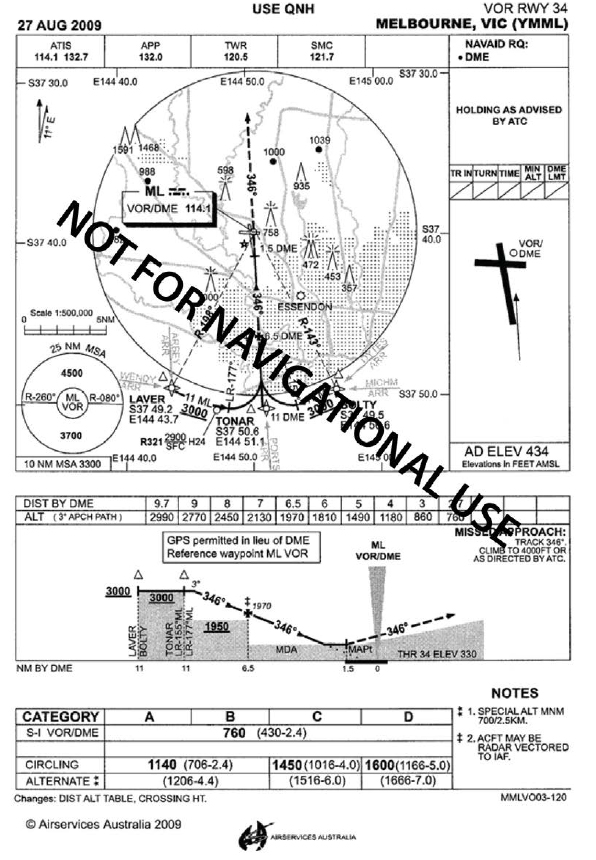 However, with descent now continuing unchecked, shortly after the flight crew had disconnected the AP at an altitude of 1284 feet when still about 7 nm from the runway threshold (and therefore over 1300 feet below the procedure vertical profile and only 850 feet aal), the TWR controller had observed both visually and on radar that the aircraft was low on the approach and asked the flight crew to ‘check altitude’. Four seconds later the controller had instructed the crew to “climb go-around carry out missed approach runway 34” and the flight crew had responded ‘climbing’. The lowest altitude reached of 984 feet (equivalent to 550 feet aal) was recorded a few seconds later, when the aircraft was 6.4 nm from the runway threshold, a point at which the procedure vertical profile altitude was 2420 feet,

After 30 seconds had elapsed since giving the initial go around instruction, and having observed that although the aircraft had stopped descending, it was still at an altitude of only 1,167 feet, the TWR controller asked the flight crew to confirm that they were going around. The flight crew had replied “we are climbing….we are maintaining 1,200 copy” to which the controller had responded by re-iterating the instruction to carry out a missed approach and received the response “on visual approach”. The controller then responded “negative, missed approach runway 34, climb to 4,000 feet” and the flight crew reported that they were “climbing to 4,000 feet” and subsequently did so.

The track of the aircraft and some of the key events on the approach are shown on the diagram below. A second runway 34 VOR approach was subsequently completed uneventfully with the aircraft commander as PF and using LNAV and VNAV modes. 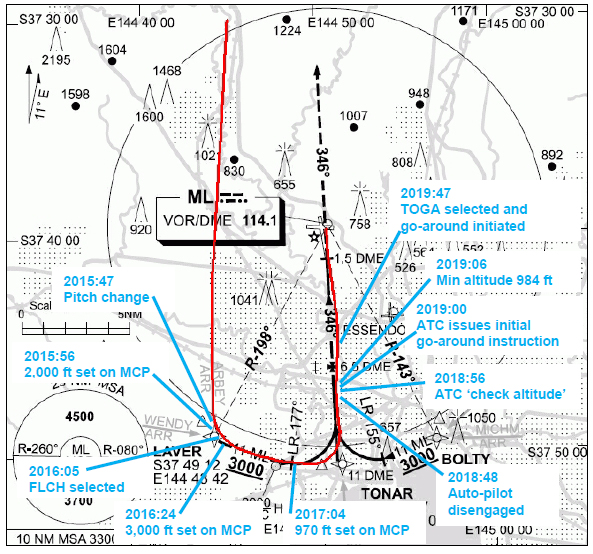 It was noted that in the 6 months preceding the investigated event, the aircraft commander had operated into Melbourne on four occasions, making non-precision approaches to runway 34 on two of them.

The Operator advised that use of the CANPA method was recommended in order “to minimise flight crew exposure to error, minimise the risk of controlled flight into terrain (CFIT) and to assist with the achievement of a stabilised approach” and that simulator training included the conduct of CANPAs using VNAV. The Operator further advised that “where an approach became unstable, or an aircraft descended below a minimum altitude constraint, a missed approach was to be executed”.

The Investigation noted that:

It was noted that in 2007 an ATSB Investigation had been carried out into another premature descent by a Thai Airways International Boeing 777 whilst on a non precision approach - on that occasion an NDB approach to runway 16 at Melbourne - and the Operator had advised that they had “known about the difficulties in flying approaches without constant angle approach paths” and were intending to provide their Boeing 777 pilots with appropriate training.

The formal statement of Findings from this Investigation was as follows:

The Final Report of the Investigation was published on 19 February 2013.