On 2 July 2021, during pre-departure loading of a Boeing 777-300 at Heathrow prior to passenger boarding with only the operating crew on board, a rear hold fire warning was annunciated and smoke and fumes subsequently entered the passenger cabin. The Investigation found that the source was a refrigerated container which had been subject to abnormal external impact prior to or during loading causing a short circuit in its battery pack. The refrigeration system involved was found by design to inhibit fire following a short circuit but it was noted that QRH response procedures did not apply to the circumstances.

On 2 July 2021, the augmented flight crew of a Boeing 777-300 (G-STBA) being operated by British Airways on a scheduled international passenger flight from London Heathrow to Mumbai as BA139 was being loaded with hold freight prior to the commencement of passenger boarding when a rear hold fire warning was annunciated in the flight deck. The flight crew responded to it by taking appropriate actions culminating in the precautionary disembarkation of all 16 crew members, the only persons on board during which one of the cabin crew sustained a minor injury. The attending fire service subsequently confirmed that the source of smoke and fumes in the aircraft was a recently loaded cargo container and that no damage had been caused to the aircraft.

An Investigation was carried out by the UK AAIB based on information provided by the aircraft operator and the manufacturer of the cargo container involved. It was noted that the 53 year-old Captain of the flight had a total of 17,000 hours flying experience of which 10,300 hours were on type.

It was established that whilst the three pilots were in the flight deck preparing for the flight, a rear cargo hold fire warning was annunciated and the operating crew responded by  informing ATC and commencing the corresponding QRH checklist. Since this required that if the aircraft is on the ground with the cargo doors open, the hold fire extinguishers should only be discharged if the existence of an actual fire can be confirmed, the Captain instructed the Relief First Officer (RFO) to go into the cabin and investigate. The warning then ceased. Having gone to the rear of the cabin and been unable to see any signs of fire through the windows or detect any related fumes there, the RFO reported back to the Captain accordingly before leaving the aircraft to make an external inspection.

Whilst the Relief First Officer was doing this, the cabin crew reported to the Captain that there were “acrid fumes in the passenger cabin” as a result of which he decided to pause the aft cargo hold fire checklist and commence the ‘Smoke Fire and Fumes’ Checklist. A ‘PAN’ call was made on the ATC GND frequency and a PA was made to the 13 cabin crew (the only people on board at the time) using the wording of the ‘Attention Crew - At Stations’ call which is the standard means of preparing cabin crew for the potential need to respond to an emergency situation and requires all cabin crew to go to their allocated seating positions adjacent to particular exit doors.

As the RFO approached the open door of the aft cargo hold, he saw two of the loading team running away from it and they explained that they had detected “acrid fumes” inside the hold. Immediately following this conversation, the RFFS arrived. The RFO briefly discussed the situation with the RFFS commander who then told him that a precautionary disembarkation of those on the aircraft was appropriate. On his return to the aircraft to inform the Captain of this, he was instructed to brief the cabin crew accordingly and did so. Once the APU had been shut down and the ‘Aircraft Secure’ Checklist completed, all members of the crew then left via the air bridge connected to door 2L and were off the aircraft approximately 8 minutes after the fire warning had been annunciated. One of the cabin crew sustained a minor injury when leaving the aircraft as the result of tripping on a cargo net being used to secure cargo in the passenger cabin.

All rear hold cargo was removed and examined by the RFFS who identified a refrigerated container as the source of the fumes. After opening the back of this container, they were able to identify the container’s rechargeable battery pack as the source of fumes and the fire warning and so after this had been electrically isolated, the container was removed to an airport warehouse pending return to its manufacturer for a detailed examination.

It was found that “significant impact/collision damage” had occurred to the back of the container apparently as a result of its mishandling sometime during the hour from completion of routine pre-flight recharging of its battery pack and the container manufacturer concluded that the external impact had caused one of the brackets in the container battery compartment to be torn from its mounting allowing the batteries to move position in a way which led to overheating and a short circuit. It was also considered that the extent of the externally-caused damage was “beyond what should be expected in routine handling”. However it was observed that the short circuit outcome had, by design, prevented any further damage to the container electrics that could have led a fire to breakout and that the frictional heating of the damaged cables had caused the smoke/fumes which had alerted the loaders to the fact that the container had been rendered unfit to be carried. 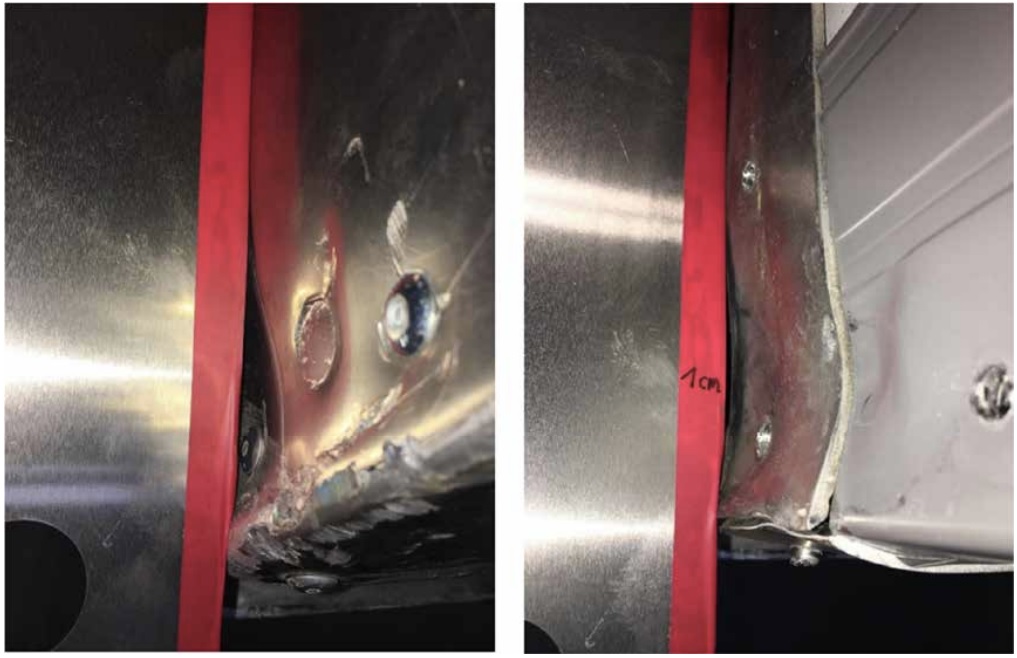 External impact damage to the container involved. [Reproduced from the Official Report]

The flight crew response to the warning received was considered relative to available procedures.

This Serious Incident occurred when a short circuit in the battery pack of a refrigerated container loaded in the aircraft aft cargo hold caused heating of cables in the pack and, therefore, smoke to be produced. The smoke was detected by the aircraft fire detection systems and a fire cargo aft warning was triggered. The crew disembarked through the boarding door.

The Final Report of the Investigation was published on 9 December 2021. No Safety Recommendations were made.