On 10 March 2017, a Boeing 787-8 lost contact with ATC over central Romania whilst the Captain was taking his second in-seat controlled rest and flight continued through Romanian and then, in daylight and without clearance, into Hungarian airspace. After well over an hour out of contact, military fighter interception prompted the re-establishment of normal communication. It was found that whilst the Captain was asleep, both speakers had been off and the First Officer had not been wearing her headset although she claimed that normal ATC communications had occurred whilst admitting that they had not been written down as required.

On 10 March 2017, a Boeing 787-8 (VT-ANT) being operated by Air India on a scheduled international passenger flight from Ahmedabad to London Heathrow as AI-171 was out of contact with ATC for well over an hour whilst in the cruise at FL400 in Romanian and Hungarian airspace in day VMC whilst the Captain was taking in-seat controlled rest and the First Officer was acting as PF without supervision. After waking up, the Captain saw a fighter aircraft in close proximity and this prompted the restoration of normal ATC communications with continued fighter escort until the flight began descent to its destination.

An Investigation was carried out by the Indian DGCA Office of the Director of Air Safety (Western Region) in accordance with the Aircraft (Investigation of Accidents and Incidents) Rules 2017. Relevant data from DFDR were successfully downloaded and relevant transcripts of ATC communications obtained. In the absence of relevant CVR data the two crew statements were taken into account.

Both crew members had been off duty for over 30 hours prior to beginning the flight to London which had taken off in daylight. After approximately 7 hours into the flight, which by then was level at FL 380, the Captain reported having been woken by his First Officer after 35 minutes of controlled rest when Turkish ATC had instructed the flight to climb to FL 400. He had completed this climb and stated that about 25 minutes after it had been completed, and after entering Romanian airspace, he had commenced a second period of controlled rest. DFDR data showed that no radio or intercom transmissions were made from either flight deck position during the 1 hour and 9 minutes which followed the aircraft reaching FL 400.

An FCOM illustration of the individual audio control panels which each pilot has on the flight deck central pedestal and which each have a speaker switch which neither pilot recalled switching off is shown below. 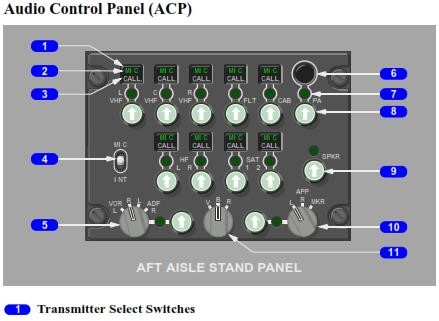 The layout of the left and right side 787 Audio Control Panels - button 9 controls the speaker and the switch arrows indicate ‘normal’ volume when the arrow points forward. [Reproduced from the Official Report]

The Captain stated that his second period of controlled rest had been approximately 35 minutes long and that on waking, he had taken a briefing from the First Officer but “didn’t remember” whether she had told him about the ATC frequency in use at that time. He further stated that having woke up, he had then “gone to the washroom” and only after return to the flight deck (which was some 20 minutes after the time he reported having woken) had he “noticed a fighter aircraft through the right side window sunshades”. He had then “put on his headset and noticed that both the speakers were switched off with the volume at 12 o’clock” and had turned them back on. He had then made contact with the fighter pilot on 121.5 MHz and was instructed to call Budapest Control. When he did so, he was asked why the flight had not made contact earlier, and had stated that “he might have missed a frequency change” and apologised. The flight was then immediately transferred to Bratislava Radar as it was about to leave Hungarian airspace after a 15minute transit.

The Hungarian Air Force fighter alongside went away but, after a nine minute transit of Slovak airspace, the flight crossed into Czech airspace and another fighter appeared alongside over the ‘LALES’ waypoint. Similar escort continued until the flight commenced its descent to destination from FL 400.

The Investigation noted that the Air India SOP for controlled rest replicates the regulatory conditions for the use of it issued by the Indian Directorate of Civil Aviation (DGCA). These allow controlled rest to be taken during low workload periods for a maximum of 40 minutes in a flight of more than 3 hours duration. A crew member is permitted to have more than one controlled rest period depending on the duration of a flight. During any controlled rest, the non-resting pilot must wear a headset with the flight deck audio speaker set to normal volume.

It was noted that according to the respective crew statements:

In respect of the First Officer’s claim to have worn her headset throughout the Captain’s second period of controlled rest, it was not possible to provide any explanation for the prolonged period out of contact with ATC which had included a mandatory border crossing clearance to be obtained before entering Hungarian airspace.

The Probable Cause of the event was determined as “the inadvertent operation of speaker volume control switches, probably by the First Officer which resulted in the loss of communication between the aircraft and ATC”'.

The Final Report was completed in September 2020 and released online on 26 October 2020. No Safety Recommendations were made because of action by the Indian regulator taken in the light of the Investigation findings.