On 15 August 2019, a Boeing 787 descending towards destination Beijing received ATC approval for convective weather avoidance but this was then modified with both a new track requirement and a request to descend which diminished its effectiveness. A very brief encounter with violent turbulence followed but as the seat belt signs had not been proactively switched on, the cabin was not secured and two passengers sustained serious injuries and two cabin crew sustained minor injuries. The Investigation noted that weather deviation requests could usefully be accompanied by an indication of how long they were required for.

On 15 August 2019, a Boeing 787-8 (JA807A) being operated by All Nippon Airways on a scheduled international passenger flight from Tokyo to Beijing Capital as NH963 was in day IMC when it encountered a very brief period of convective turbulence during descent which resulted in serious injuries to two unsecured passengers and minor injuries to two unsecured cabin crew after an approved weather avoidance deviation was modified by ATC.

The Investigation of this Serious Incident was delegated to the State of the Operator by China in accordance with ICAO Annex 13 and was commenced by the Japan Transport Safety Board (JTSB) on 22 August 2019. Relevant data was obtained from the aircraft EAFR.

It was established that as they got nearer to their destination, the flight crew were “paying attention to the weather conditions” because they were aware that thunderstorms could be expected around Beijing at their expected arrival time. Whilst still in the cruise over Inner Mongolia, they reported having observed by visual observation and on their weather radar that there were locally developed Cb clouds and associated strong returns en route between waypoints ‘DABMA’ and ‘SABEM’ (see the illustration below) and so a deviation for weather avoidance was requested and approved from ATC to fly a radar heading 230° from waypoint ‘UPNAT’ to fly to the south of the weather. 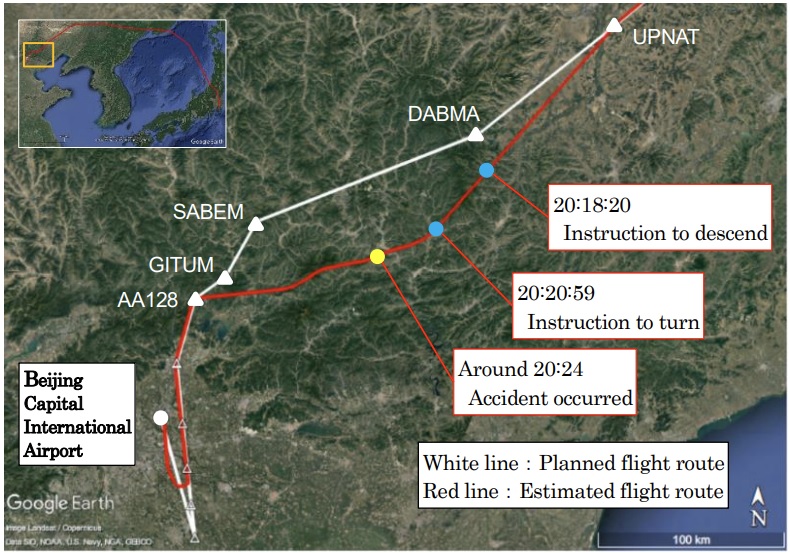 The flight ground track (white) and the deviation (red). [Reproduced from the Official Report]

Having changed its heading, the flight was reported to have been in “thin clouds” spreading to the south of the main weather radar returns and since there were no on track weather radar returns or turbulence the Captain continued with the seat belt signs off. Shortly after the deviation had begun, ATC instructed the flight to begin descent to 3,600 metres (approximately11,800 feet). Two and a half minutes later, ATC instructed the flight to route direct to waypoint ‘GITUM’ and continue descending to reach 3,600 metres by that point in order to avoid a Restricted Area which required a right turn. The aircraft entered cloud during the descent but the crew stated that there were no returns on the weather radar although they were apparently aware that “cumulus clouds were gathering down below” and so the SCCM was called to the flight deck and advised to expect that the seat belt signs would be turned on soon as some turbulence was expected later in the descent.

Immediately after the SCCM left the flight deck, the Captain temporarily stopped the descent and maintained level flight at 5,500 metres between cloud layers with the aim of remaining clear of the towering cumulus visible below but then reportedly realised at once that it would not be possible to do so and so he turned on the seatbelt signs less than a minute after the SCCM had left the flight deck. Almost immediately violent turbulence was encountered as the aircraft reportedly “closely skimmed the cumulus cloud top”. The SCCM stated that just as they reached the forward galley after leaving the flight deck, the seat belt signs had come on and this had been quickly followed by “intense turbulence” before they had had time to warn the other members of cabin crew that the seat belt signs would be turned on soon because of expected turbulence or make a PA announcement to alert the passengers. Data on the EAFR recorded vertical acceleration fluctuating between +2.16g and +0.37g for just two seconds.

Out of the nine cabin crew, only the SCCM had time to sit down while the others were in any case away from their stations attending to passengers and two of them lost their balance and sustained minor injuries. One of the 214 passengers who was waiting in a queue to use lavatory L3 (see the illustration below) lost their balance and fell to the floor sustaining an avulsion fracture to their right foot. Another was sitting down in lavatory R4 and sustained a lumbar compression injury as a result of their upper body being “strongly squeezed longitudinally”. Both passenger injuries were classified as being “serious”. The remainder of the flight was without further event and aircraft landed at its destination just under half an hour after the sudden and brief turbulence episode.

The cabin locations of the two slightly injured cabin crew and the two seriously injured passengers. [Reproduced from the Official Report]

Satellite imagery (see the illustrations below) showed that the turbulence encounter had occurred on the edge of a large area of rapidly building convective cloud. It appeared likely that the ATC requirement to change track to avoid a Restricted Area had compromised the effectiveness of the intended avoidance manoeuvre since compliance meant that there was insufficient time to provide an alert to passengers and cabin crew to secure themselves. 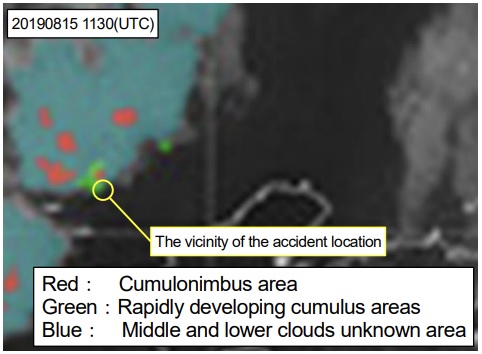 The area of convective cloud. [Reproduced from the Official Report] 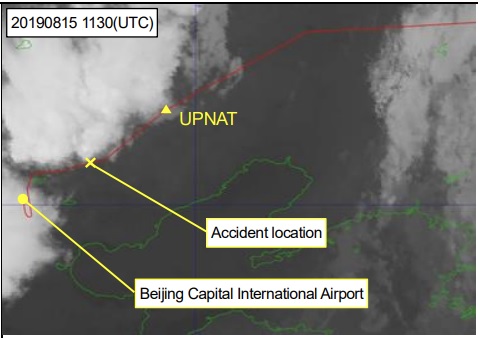 An Infrared Image showing the route. [Reproduced from the Official Report]

The Investigation tentatively concluded that approved requests for weather avoidance are more likely to be continued or a suitable alternative agreed if the initial request indicates how long a modified track is likely to be needed for and noted that this may assist pre-emptive use of the seat belt signs and direct alerting of both all cabin crew and all passengers thus reducing the risk of injury.

The Probable Cause of the investigated injuries was determined as “the encounter with violent turbulence when flying close to a Cumulus cloud top which resulted in two passengers who were not in their seats sustaining serious injuries”.

Safety Action taken by the aircraft operator as a result of this event and known to the Investigation was noted as having included the making of an in-flight safety video to visualise specific examples of conduct at the time of encountering sudden turbulence in order to alert passengers to the potential risk to their safety.

The Final Report was adopted by the JTSB on 22 January 2021 and published in both English translation and the definitive Japanese version on 18 February 2021. No Safety Recommendations were made.