On 21 December 2015, a Boeing 787-8 at FL400 in the vicinity of convective weather conducive to ice crystal icing penetrated an area which included maximum intensity weather radar returns. A very short period of erratic airspeed indications followed and the FCS reverted to Secondary Mode requiring manual flying. Since this Mode remained 'latched' and could therefore only be reset on the ground, it was decided that an en route diversion was appropriate and this was accomplished without further event. Boeing subsequently modified the FCS software to reduce the chances of reversion to Secondary Mode in short-duration unreliable airspeed events.

On 21 December 2015, the airspeed indications on a Boeing 787-8 (VH-VKE) being operated by Jetstar Airways on a scheduled passenger flight from Melbourne to Singapore as flight 007 became erratic in day IMC and reversion to manual flight path control resulted. Although normal airspeed indications were subsequently restored, the autopilot could not be re-engaged and so it was decided that with approximately four hours of flight time remaining, a diversion to Darwin was appropriate and this was accomplished without further event.

An Investigation was carried out by the Australian Transport Safety Bureau (ATSB). FDR data was successfully downloaded and used in the Investigation.

It was established that, approximately 4 hours after take-off with the First Officer acting as PF, the aircraft was in the cruise at FL 400 with AP and A/T systems engaged and about 250 nm north of Darwin. The flight crew stated that they had observed a green-coloured area with magenta patches ahead on their airborne weather radar and that when noticed this area was "too close to avoid", magenta being indicative of the maximum intensity returns. The crew did not mention having seen any of the amber or red returns which would be expected to separate areas of green and magenta returns. They selected the seat belt signs on and "the aircraft entered an area of light turbulence which then increased to moderate". Concurrently with this increase in turbulence, the crew reported noticing erratic airspeed indications on both PFDs. The AP system disconnected and a series of EICAS messages were displayed including 'AIRSPEED UNRELIABLE' and an indication that the Primary Flight Control System had degraded from Normal Mode to Secondary Mode. The Captain took over as PF and the crew conducted the corresponding AIRSPEED UNRELIABLE Checklist. As indicated in the applicable QRH Table, the crew used pitch angle and engine thrust to maintain the required airspeed but by this time, it appeared that all indications had returned to normal. However, with the Flight Control System now latched in Secondary Mode, it was not possible to re-engage the AP and with another 4 hours needed to reach Singapore, the decision to divert to Darwin, Northern Territory was made and after dumping fuel to get down to MLW, this was accomplished without further event.

It was noted that an FAA AD - 2013-24-01 - affecting the General Electric GEnx engines fitted to the aircraft involved, was in force which required that "flight crews have operating instructions to avoid flights into high altitude ice crystal icing (ICI) conditions". Jetstar Airways advised that "as such, weather information with relevant en route icing conditions was used for the purposes of flight planning [and] in accordance with the AD, a crew would manoeuvre around any observed weather conditions that had potential to cause icing to the engines". In the investigated case, the anticipated crew action did not occur and the Investigation did not reference the pre-flight weather forecast given to the flight crew. Boeing meteorological specialists made a detailed meteorological analysis of the location of the event at and around the time it had occurred and confirmed the presence of "convective weather related to northern Australia’s monsoon season" which was deemed "highly conducive to ice crystal icing". On the basis of this finding, it was concluded by the Investigation that "the erratic airspeed values likely resulted from ice crystal icing of the pitot-static systems" for a brief period.

It was noted that the 787 aircraft pitot-static air-data reference system (ADRS) passes the values from the three independent pitot-static sensor systems through a fault detection system which integrates them into a single 'voted airspeed' which is then shown on the PFDs. Separately from this process, an alternative derivation of airspeed is computed from the Angle of Attack (AOA) (AoA) and inertial reference systems and described as the 'AoA speed'. Any "significant disparities" between the voted airspeed normally displayed on the PFDs and the AoA speed will result in the annunciation of the 'AIRSPEED UNRELIABLE' message accompanied by disconnection of the AP. If the gap between the voted airspeed and the AoA speed then becomes sufficient to breach a predetermine threshold - in this case the voted airspeed reached the 'No Computed Data' level - then the Primary Flight Control System reverts to Secondary Mode. In this mode, various system functions, including the autopilot, are no longer available and it was found that "for the conditions of this event", Secondary Mode was a latched condition which, once activated, meant that Normal Mode could only be re-instated on the ground.

Recorded Flight Data from the event 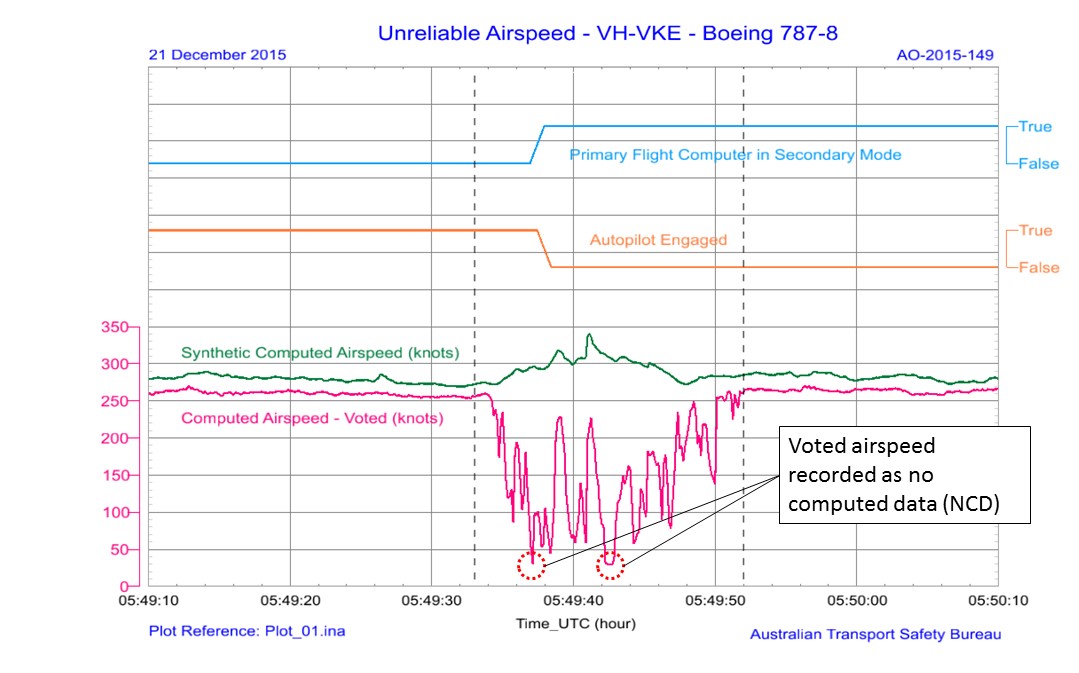 Relevant parameters from the FDR data recorded during the ICI episode. [Reproduced from the Official Report]

The Findings of the Investigation in the form of Contributing Factors were formally documented as follows:

Safety Action taken whilst the Investigation was in progress was noted as including the following:

The Final Report was published on 14 June 2016. No Safety Recommendations were made.