On 1 June 2019, a Boeing 787-8 lost all cabin air conditioning after both packs failed less than an hour from its destination, Narita. When the Cabin Altitude reached 10,000 feet, the descent already commenced was completed as an emergency descent and the flight thereafter was without further event. The Investigation found that although an amended non normal procedure restricting pack resets to a maximum altitude of 35000 feet had been issued almost two months earlier, it was still “under review” at the operator which has since amended their procedures for assessing manufacturer communications which have operational safety implications.

On 1 June 2019, a Boeing 787-8 (JA828A) being operated by All Nippon Airways (ANA) on a scheduled international passenger flight from San Jose USA to Narita as ANA171 with an augmented flight crew of three pilots was in the cruise in day VMC when both air conditioning packs failed. A descent at normal rate was commenced and converted to an emergency descent when the cabin altitude reached 10,000 feet,at which point an emergency was declared. The flight thereafter was completed without further event.

The event was classified as a Serious Incident and an Investigation was carried out by the Japan Transport Safety Board (JTSB). Relevant information was downloaded from the on- board EAFR (Enhanced Airborne Flight Recorders) and AMF-CPL (Airplane Condition Monitoring Function - Continuous Parameter Logging) and was also available from crew statements and ATC communications and radar recordings.

When level at FL 430 a little over 9 hours flight time since takeoff, thrust was reduced to slow down slightly from M 0.84 to M 0.78 in order to meet the required destination ETA. Soon after this, the EICAS indicated that the left side air conditioning pack had failed and on checking the operating status of the system on the MFDU it was found both left side Cabin Air Compressors had shut down.

A reset was attempted in accordance with the applicable procedure and the left side system restarted but after less than 2 minutes, the EICAS indicated that both packs had failed and reference to the MFDU confirmed that all Cabin Air Compressors had shut down. A descent was commenced in response whilst the cabin altitude, which was now rising, was monitored. Within 6 minutes, with the aircraft passing FL277, the cabin altitude had reached 10,000 feet and a corresponding warning was annunciated. The Captain declared an emergency to ATC and commenced an emergency descent to 10,000 feet which was reached after a further six minutes. The aircraft was then flown at 10,000 feet until descent at destination was required and a landing at Narita was made just over 40 minutes after completion of the emergency descent. The maximum cabin altitude reached during the emergency descent was 11,400 feet. A detailed inspection of the aircraft after completion of the flight confirmed that there was no airframe damage.

The Illustration below depicts the vertical profile of the flight with corresponding annotations. 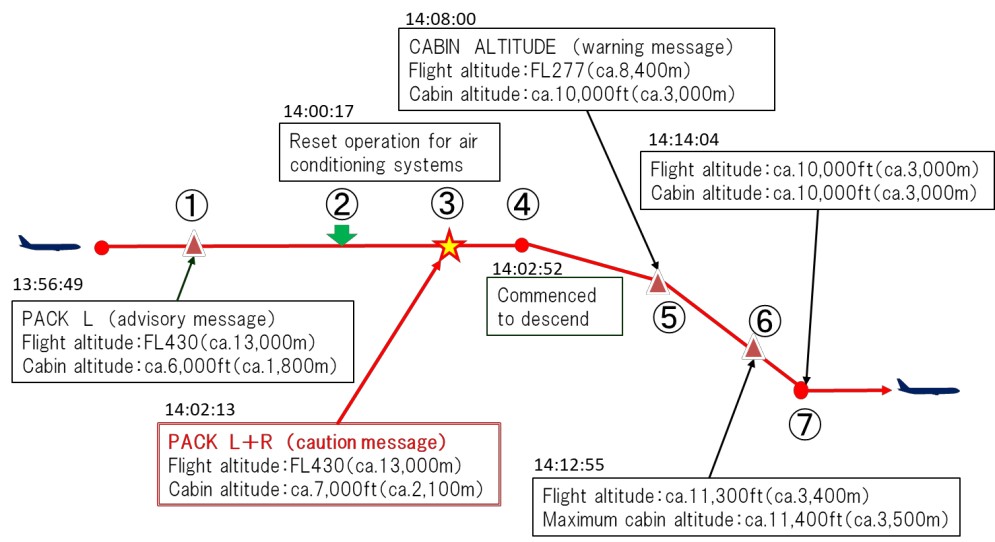 An annotated representation of the aircraft vertical profile. [Reproduced from the Official Report]

Although the flight crew involved followed the correct Non-Normal Procedure when responding to a single Pack failure, the procedure involved had not at that time been amended to reflect a change communicated by Boeing in a FCOM Bulletin message to 787 operators almost two months earlier. This message instructed crews not to attempt the reset of air conditioning systems above 35000 feet but although this message had been received from Boeing at issue on 5 April 2019, it was still “under consideration” at the time of the event under investigation and no amendment had been made to the affected non-normal procedure in the Company OM. Had it been followed, the complete loss of pressurisation would not have occurred.

Safety Action taken by All Nippon Airways as a result of this event and known to (and recommended by) the Investigation was noted as having included the airline making changes to its Company OM updating procedures to ensure that technical information issued by an aircraft manufacturer relating to non-normal procedures or other matters with potentially serious safety implications are in future promptly reviewed and the OM modified accordingly.

The Final Report was adopted by the JTSB on 6 November 2020 and published in both English translation and the definitive Japanese version on 26 November 2020. No Safety Recommendations were made.