On 12 July 2013 an unoccupied and unpowered Boeing 787-8, remotely parked at London Heathrow after an arrival earlier the same day caught fire. An investigation found that the source of the fire was an uncontained thermal runaway in the lithium-metal battery within an Emergency Locator Transmitter (ELT). Fifteen Safety Recommendations, all but one to the FAA, were made as a result of the Investigation.

On 12 July 2013, a Boeing 787-8 (ET-AOP) being operated by Ethiopian Airways and remotely parked at London Heathrow caught fire whilst unoccupied and unpowered. After initial difficulties, the airport RFFS eventually succeeded in extinguishing the fire after almost half an hour. Damage sustained to the aircraft was limited but included externally visible evidence of structural damage to the composite fuselage. 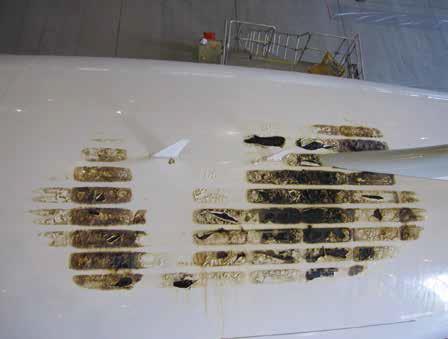 An independent investigation in accordance with ICAO Annex 13 principles and procedures was carried out by the UK AAIB. This action was taken on a discretionary basis in accordance with the nationally defined powers of the Chief Inspector of Air Accidents on the basis that although the fire occurred to an aircraft which was unoccupied, unpowered and parked out of service, the fire proved difficult to extinguish and it was suspected that it might be possible for an in-flight fire to occur by similar causation.

It was established that the aircraft had landed at Heathrow earlier the same day after an uneventful scheduled passenger flight from Addis Ababa and taxied to a Terminal 3 gate for passenger disembarkation, arriving there at approximately 0540. Later, it was towed to a remote Terminal 5 parking stand adjacent to one of the airport fire stations where the aircraft was subsequently secured after an engineer on the flight deck had visually confirmed that the ground electrical power, although remaining connected, was no longer available to the aircraft.

Nearly ten hours after the arrival at Terminal 3 for passenger disembarkation, signs of fire reported by ATC were investigated by fire fighters who initially discharged water and foam onto the aircraft and disconnected the cable leading to a non-running ground power cable. They had then entered the aircraft at door L2 equipped with breathing apparatus and had encountered thick smoke. “As they moved to the rear of the aircraft the smoke became denser so they opened further cabin doors to clear the smoke. At the rear of the passenger cabin they observed indications of fire above the ceiling panels. They attempted to tackle the fire with a handheld Halon extinguisher but this was not effective, so they forcibly moved a ceiling panel and tackled the fire with water from hoses” which was effective and led to the fire being extinguished.

Examination of the aircraft disclosed extensive heat damage to the upper part of the rear fuselage of the aircraft in the vicinity of the Honeywell 'RESCU 406AFN' Emergency Locator Transmitter (ELT). The absence of any other source of a system containing stored energy capable of initiating a fire in thus area supported by evidence gained from a forensic examination of the ELT, led to the conclusion that the fire had been initiated by an uncontrolled and rapid discharge of stored energy from the 5-cell lithium-metal battery which powered the ELT. ELT battery wires were found "crossed and trapped under the battery compartment cover-plate". investigators concluded that this had "probably created a short-circuit current path which could allow a rapid, uncontrolled discharge of the battery". It was concluded that this latent wiring fault had been in existence since the battery had last been accessed without detection. Both Boeing and OEM Honeywell subsequently concurred with the conclusion that this latent fault was "the most likely cause of the ELT battery fire, most probably in combination with the early depletion of a single cell".

It was noted that both cell-level and battery-level safety features had failed to prevent this single-cell failure so that when it propagated to adjacent cells, a cascading thermal runaway developed with rupture of multiple cells and the consequent release of smoke, fire and flammable electrolyte. It was concluded that the trapped battery wires had "compromised the environmental seal between the battery cover plate and the ELT" thus providing a way for flames and battery decomposition products to escape from the ELT. Once released from the ELT, the flames came into contact with the thermo-acoustic insulation blankets and composite aircraft structure in the immediate vicinity of the ELT. "This elevated the temperature in the fuselage crown to the point where the resin in the composite material began to decompose, providing further fuel for the fire" and "a slow-burning fire became established in the fuselage crown". It was concluded that the fire so-caused had then continued even after the initiating energy from the battery thermal runaway had been exhausted. 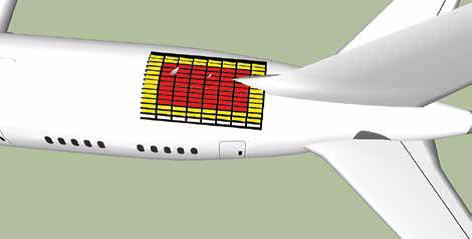 No evidence was found that a flashover fire had occurred - or was about to occur and neither was there any evidence that the rate of progression of the structural fire was increasing by the time it was interrupted. Thermal modelling was used to assess the likely effects of a similar fire occurring in-flight and indicated that a combination of an increased rate of convective cooling which would have been created by external airflow and the lower outside air temperatures which would have prevailed, would have substantially reduced the progression of a fire of the type that occurred.

The inaccessible location of the ELT and its battery and the limited awareness of this were considered during the Investigation. It was found that, at the time of the fire, "published ARFF information for the B787 did not indicate the location of ELT battery" and that Heathrow Airport RFFS "were not aware that there was a lithium-metal battery above the ceiling panels that could be the source of the fire". It was also noted that were an in-flight ELT battery fire to occur, its detection and the identification of its location would be "challenging" for any cabin crew, as would achieving success in the fighting of such a fire.

It was noted that the ELT involved had been manufactured under contract to Honeywell by Instrumar and that, at the time of the investigated fire, “there were approximately 3,650 identical batteries in service in RESCU 406AFN ELTs and the similar RESCU 406AF ELTs fitted to numerous aircraft types”. It was found that although there had been no reports of other in-service thermal events involving the same batteries or cells prior to the instance under investigation, five months beforehand, Honeywell had received one of these batteries back from an aircraft manufacturer because it had discharged and had discovered battery wires trapped under the cover plate in a similar way to those on the unit from which fire had originated. As a result, a quality review had been conducted which had led to “a modification of the Instrumar ELT assembly instructions”. Prior to the instance under investigation, “no inspections or modifications were recommended for ELTs already delivered and the findings were not communicated to customers and aircraft manufacturers.” Following the event, however, operators were instructed to either remove the ELT or inspect ELT wiring via an AAIB bulletin, Boeing Multi-operator Message, and FAA & Transport Canada Airworthiness Directives.

After the completion of extensive investigative work, it was concluded that:

The Investigation formally identified the following four Causal Factors in respect of the fire:

The Investigation also formally concluded that the following five Contributory Factors "most likely" led to the thermal runaway of the ELT battery:

Safety Action taken as a result of the fire and during the Investigation was noted to have included the following:

A total of fifteen Safety Recommendations were made as a result of the Investigation as follows:

Responses to both of these Recommendations were subsequently received and assessed by the AAIB as "Adequate - Closed".

As of June 2015, it was recorded that a Final Response from the FAA to all these Recommendations was still awaited.

On Publication of the Final Report:

The Final Report of the Investigation was published on 19 August 2015. This incorporates the findings contained in Special Bulletins S5/2013 and S4/2014 which were issued to report interim progress during the Investigation.