On 13 February 2019, a Boeing 787 departing Amsterdam was given a non-standard long pushback by ATC in order to facilitate the use of its stand by an incoming flight and when a Boeing 747 was subsequently given a normal pushback by a single tug driver working alone who was unaware of the abnormal position of the 787 and could not see it before or during his pushback, a collision followed. The Investigation concluded that the relevant airport safety management systems were systemically deficient and noted that this had only been partially rectified in the three years since the accident. 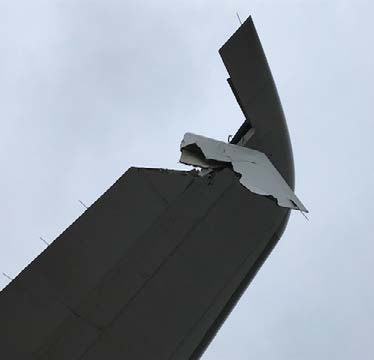 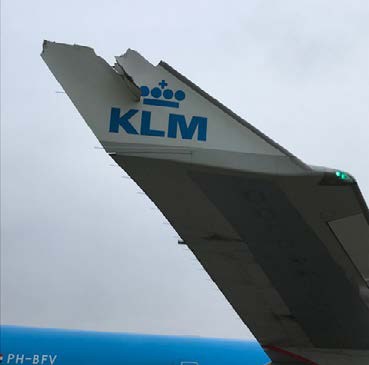 A Serious Incident Investigation was commenced by the Dutch Safety Board the same day. Relevant data was recovered from the 2 hour CVR of the 747 but that from the 787 was overwritten after it was not secured after collision contrary to the operators own procedures.

A Boeing 787-9 departing in service from Gate F8 (see the illustrations below) was instructed to make a long pushback onto taxiway A16 so that an arriving aircraft could taxi onto it and since tug drivers have no direct communication with ATC, this instruction was passed to the tug as received. The result was that the aircraft was positioned approximately 20 metres beyond the pushback limit line on taxiway A16. The Boeing 747-400 was then cleared to push back from Gate E7 which required it to be pushed back onto taxiway A14. Since the GND controller realised that this pushback may bring the aircraft close to the 787 under the prevailing airport procedures, but had no means of communicating directly with tug driver moving aircraft, he transmitted a cautionary message to the 747 crew. However this message was partially blocked and when, as a consequence, no readback was received, the GND controller took no further action. Since the 747 crew had not received the message, they could not pass it on to the tug driver. The tug driver was therefore unaware that the 787 had been given a non standard pushback and although he was unable to determine if clearance might be compromised either before beginning the pushback or during it, he had no reason to expect otherwise. 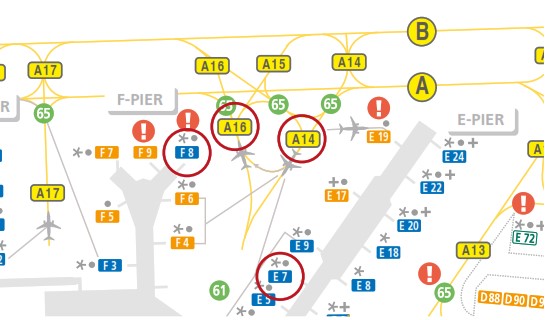 Gates in the area where the collision occurred (* indicates additional instructions apply). Standard pushback directions are blue-right & orange-left. F8/E7/A14/A16 are circled in red. 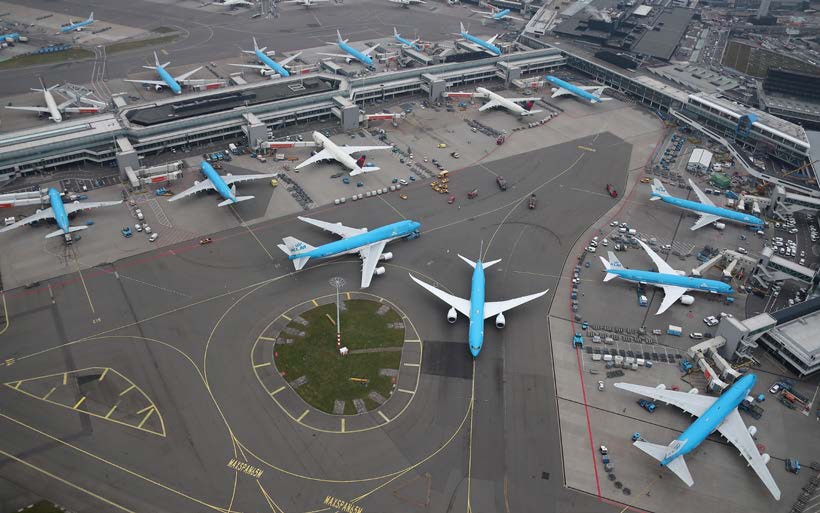 The position of both aircraft following the collision (the pushback limit for the 787 is at the junction of taxiway centrelines ahead of the aircraft). [Reproduced from the Official Report]

The “long pushback procedure” used at Amsterdam was not “an assessed and aligned procedure between the parties involved” and as result of its use, 787 separation margins were no longer assured. The reason for deviation from a standard pushback procedure was to allow an arriving aircraft to reach its gate without delay. It was observed that air traffic controllers’ deviating from standard procedures is (in general) a not uncommon practice and noted that this was also one of the findings of a more general report on air traffic safety at Amsterdam published in 2017. This concluded that although controllers’ “need some professional space to deviate from standard procedures” such deviation “can also lead to additional complexity without overseeing all consequences”. In this case, the GND controller’s clearance for the B787 to carry out a “long pushback” did not specify a specific position or point of reference, which left the positioning of the aircraft to the pushback truck driver.

In accordance with procedures for the use of towbarless tugs such as the one involved, their operation did not require the involvement of any personnel other than the tug driver. It was noted that although the Aircraft Handling Manual stated that additional ground staff may, on the request of the tug driver, be present as wing walkers or lookouts “to safeguard the rear movement of the aircraft and to ensure safe clearance to prevent collision”, the tug drivers involved “indicated that in practice this option is seldom used”. It was noted that whilst tug drivers were required to keep a listening watch on the relevant Apron Control radio frequency, they did not have access to the GND frequency on which all pushback clearances were issued.

It was determined that the 787 pushback had been “a deviation from standard procedures” and that whilst such deviation was “not an uncommon practice for controllers at Amsterdam”, it could often lead to “increased complexity and consequent risk”. The GND controller realised that the intended long pushback may not result in sufficient clearance from the stationary 787 for it to be safely completed but their mitigation action of issuing a cautionary instruction to the 747 pilots was ineffective because it was not received and acknowledged by the crew and therefore not communicated to the tug driver carrying out the push back.

It was noted that an ad hoc review of the event by representatives of KLM, the ANSP, the Airport Operator and the Dutch Airline Pilots Association in the context of the “Integrated Safety Management System” in place at the Airport had taken place. On its conclusion some nine months after the accident, this review had identified safety issues which it considered it had illustrated including the following:

The main Conclusions of the Investigation were documented as follows:

The assessment of the taxiway behind the aircraft and the issuance of conflict-free pushback clearances is the responsibility of Ground Control and cannot be delegated to a pushback truck driver. The use of standard pushback procedures with known obstacle clearances and separation margins is the main barrier to ensure sufficient separation in pushback operations. It is therefore essential that in case of deviations from the standard procedure, the risks are recognized and acted upon. Where choices can be made, safety should have priority over efficiency. This may imply that temporary traffic restrictions apply.

Following the accident, the Air Traffic Control procedures have been amended to clarify the responsibilities of Ground Control and to include a specific position or reference for non-standard pushback clearances. Although this provides more clarity for both ground controller and pushback truck driver, the working practice of long pushback procedures whereby separation margins are not guaranteed, is still being used and thereby introducing complexities and safety risks as it is not an assessed procedure. It is uncertain to what extent a set of additional safety measures initiated by the sector parties will contribute to a further risk reduction of pushback collisions, as the majority of these measures require further study or technological development before implementation.

The Investigation further showed that the operator’s procedures were not effective in preserving the Cockpit Voice Recorder (CVR) recordings for the purpose of the safety investigation, which is an obligation in the event of an accident or serious incident.

The Final Report of the Investigation was published on 24 March 2022.